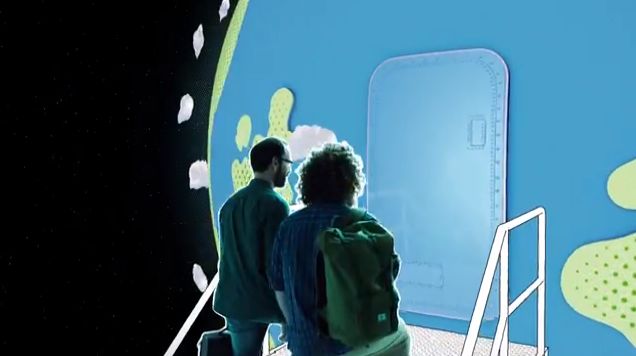 The fictitious world is a tropically, snowy, hot and cold sort of paradise where people can find over 2,154 airports, 65,000 secluded islands, 43,678 local dishes,13 million hotel rooms and 350,000kms of stunning coastline.

To bring this unique destination to life M&C Saatchi created an irreverent online film set to an equally irreverent song featuring the adventures of two young guys as they discover every destination they could ever want – in one place.

On their journey the duo encounter singing farts, a tornado made out of noodles, dancing sheep, space llamas, a spot of ‘foxy boxing’, a 40-foot-tall bikini-clad woman and more, all set against the backdrop of Wonderful Wotifia, where, as the song proclaims….”it’s fun to be a visita.”

The film, a blend of live action and animation, is the result of a collaboration between production companies Song Zu, Heckler, Sixty 40 and World Wide Mind’s US-based director Rocky Morton. Morton, a highly regarded commercials director, has also directed feature length films including Super Mario Brothers, D.O.A and is the creator of cult icon Max Headroom.

Says Ben Welsh, M&C Saatchi executive creative director: “It’s amazing what you can do with a brutally simple idea and incredibly talented team of people.

“The result is something rather random, unique and fun with that rush of excitement and that holiday feeling you get when booking a trip away.”

Michael Betteridge, Wotif group’s general manager of marketing says the Wotifia campaign represented a new direction for the Wotif.com brand, while staying true to its irreverent and fun heritage.

Says Betteridge: “Wotif.com is an iconic brand which was launched 14 years ago. This campaign encourages those people who already think they know us to take another look at our site, as we’ve evolved and now offer much more than domestic accommodation.

“It’s also designed to reach the ‘next generation’ of travellers and introduce them to our brand, our range of travel products and experiences, and to our irreverent and fun approach to travel.

“Wotifia is a travel utopia bordered only by your own imagination; There’s nowhere quite like it, yet it’s everywhere you’ve ever wanted to go and it can all be accessed through Wotif.com.”