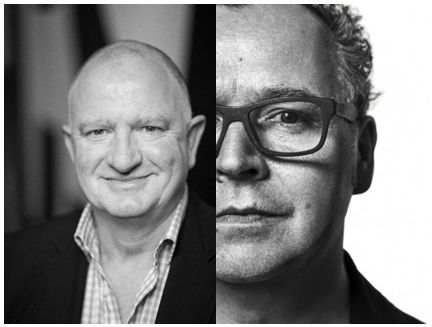 Talbot (near left) only took on the chief creative officer – and co-managing – role at Whybin\TBWA Auckland in early 2013. He returns to the DDB fold – he was group ECD of the NZ office for five years – after spending a year at RKCR/Y&R in London.

As a result of King’s departure the troubled M&C Saatchi New Zealand office will close in July. It is understood that the agency has given management the opportunity to take ownership of the agency’s clients.

Talbot will be working with DDB Sydney ECD Dylan Harrison, as the network puts in place a new creative structure in the region.

In line with the appointment of Damon Stapleton as CCO at DDB New Zealand last month, Talbot’s appointment comes as the network looks to magnify the senior creative offering within Australia and New Zealand.

Says managing director DDB Australia, Andrew Little: “Under Dylan’s tenure DDB Sydney has produced outstanding commercial and creative success over the past three years. Following suit with New Zealand we have appointed Toby as Chief Creative Officer at DDB Sydney to amplify our creative firepower and continue to develop effective, relevant and outstanding campaigns. Toby and Dylan are both world-class talents – what a partnership!”

Says Talbot: “DDB has always been hugely supportive of me and my work and I am thrilled to be returning ‘home’. My time at DDB Auckland continues to be a highlight for me and I have kept a close eye on the network’s outstanding success. The output across the region, not least in Australia, has been extraordinary and I am excited to be joining Dylan and the team.”

Adds Marty O’Halloran, chairman DDB Group Australia and New Zealand: “We are delighted to welcome Toby back into the DDB fold. He led the creative department in DDB Auckland to tremendous success and we always secretly hoped he would return to us one day. As with every department within the DDB Group, we are always looking at ways to optimise our structure with the resources available whilst producing the highest possible quality of work.”

Adds Harrison: “Toby has been a great mentor to me ever since I began at DDB Sydney, I’m looking forward to the relationship being made official. He is an awesome creative talent not to mention an awesome bloke. I think we will be a great team.”

In 2011, King was awarded the Irving Wunderman award at the Caples Awards in New York. His work has won more than 30 Caples awards, including a number of Gold awards and the Best in Show award in 2008. King has also won 14 Cannes Lions awards, in additional to many more Australian and New Zealand awards.

Says Keith Smith, TBWA president – international: “I am delighted that Dave is now in a position to join our growing team in New Zealand at this time. He is one of the rare creatives that can move seamlessly between media types and is perfectly suited to lead Whybin\TBWA in its push to create brand-aligned content across a broader range of customer channels.

“Dave has a formidable reputation for developing talent and for producing work that is highly effective. He is the modern age creative mind – media-neutral, very savvy, and an excellent mentor. He’s the ideal fit for Whybin\TBWA.”

Says McLeay: “We can’t be in the business of creating a narrow range of highly crafted media productions and expecting them alone to do the job for a brand. At Whybin\TBWA, we’re moving past optimising media placement to build a business model that optimises content itself. This requires a different way of thinking, which is why Dave is a great fit with our team.”