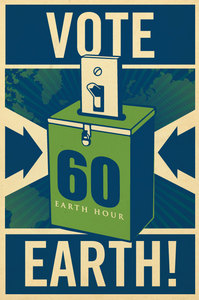 Leo Burnett Sydney will soon be launching a new campaign to promote Earth Hour 2009. While the campaign has not officially launched, it appeared on the cover of the Sydney Morning Herald this morning, after finding it’s way online yesterday.
The campaign will hold the world’s first global election, between the candidates of Earth, and global warming. In the lead up to Earth Hour, people of the world will be urged to ‘VOTE EARTH’, by using their light switch as their vote. Switching off your lights is a vote for Earth, while leaving them on is a vote for global warming, transforming Earth Hour into a worldwide election night.
Last year in 2008, 50 million people took part in Earth Hour by switching off their lights. With 2009 being the third year of Earth Hour, Leo Burnett wanted to re-invigorate the brand, and generate a level of involvement far exceeding previous years.
“Their task was huge, to reinvent an already famous idea. To say I am proud of what they did would be an understatement. ‘VOTE EARTH’ is a powerful idea that can really make a difference leading to the Copenhagen Summit. It’s amazing to think this will be the world’s first global vote.” says Todd Sampson, CEO, Leo Burnett.
The target set by WWF and Leo Burnett this year is to get 1 billion people around the world to switch off their lights. The enormity of this target needs an equally big idea. Says creative team behind ‘VOTE EARTH’, Michael Canning and Kieran Antil: “1 billion people is a lot of people. To reach this target we need an idea that really changes people’s perception of energy conservation. By turning the issue of climate change into an election between Earth and global warming, it makes the problem very direct for the individual, in the sense that we all have a vote, and every vote counts”.
To achieve the level of global scale which this election deserves, Leo Burnett decided that Shepard Fairey, the artist who created the iconic ‘Hope’, ‘Change’ and ‘Progress’ posters of Barack Obama in the recent US Presidential election, was the only choice to create the artwork for the ‘VOTE EARTH’ campaign. Working with Curious Films, the artwork will be featured in a global integrated campaign, including a TVC going to air in over 74 countries.
Says Pete Grasse, executive producer of Curious Films: “When the guys first approached Curious with the opportunity of producing this year’s Earth Hour campaign it was a chance we had to jump at. Being environmentally responsible is a core value for us as a company so it was an easy decision. The first challenge we faced was getting Shepard Fairey involved. The guys were adamant he create the artwork. Being no small feat on the heels of Shepard’s Obama election poster, I was thrilled when I was able to deliver. This project has grown considerably since that time and I am really proud of the work still to come.”
WWF are taking the results of the ‘VOTE EARTH’ campaign to the Global Climate Change Conference in Copenhagen 2009, which will be submitted as a united statement by the people of the world against global warming. This meeting will urge governments around the world to adopt official policies to take action against global warming, and will supersede the Kyoto Protocol.
Says Andy DiLallo, co ECD of Leo Burnett, Sydney: “To give the Earth Hour brand enough momentum to get 1 billion people involved this year, we needed to build the brand and give it a new dimension. ‘Vote Earth’ will be extremely powerful in getting the world to take action against global warming, not just for Earth Hour but at the Climate Change Conference in Copenhagen, and also as an ongoing mantra for people in their everyday energy consumption.”

Adds co ECD Jay Benjamin: “This is the first time in history that any person of any nationality, race, gender or age will get the chance to come together and tell the leaders of the world just how they feel. ‘VOTE EARTH’ is a campaign of the people with the power to unite the world and take Earth Hour to the next level. Action. Human action against the world’s biggest problem.”