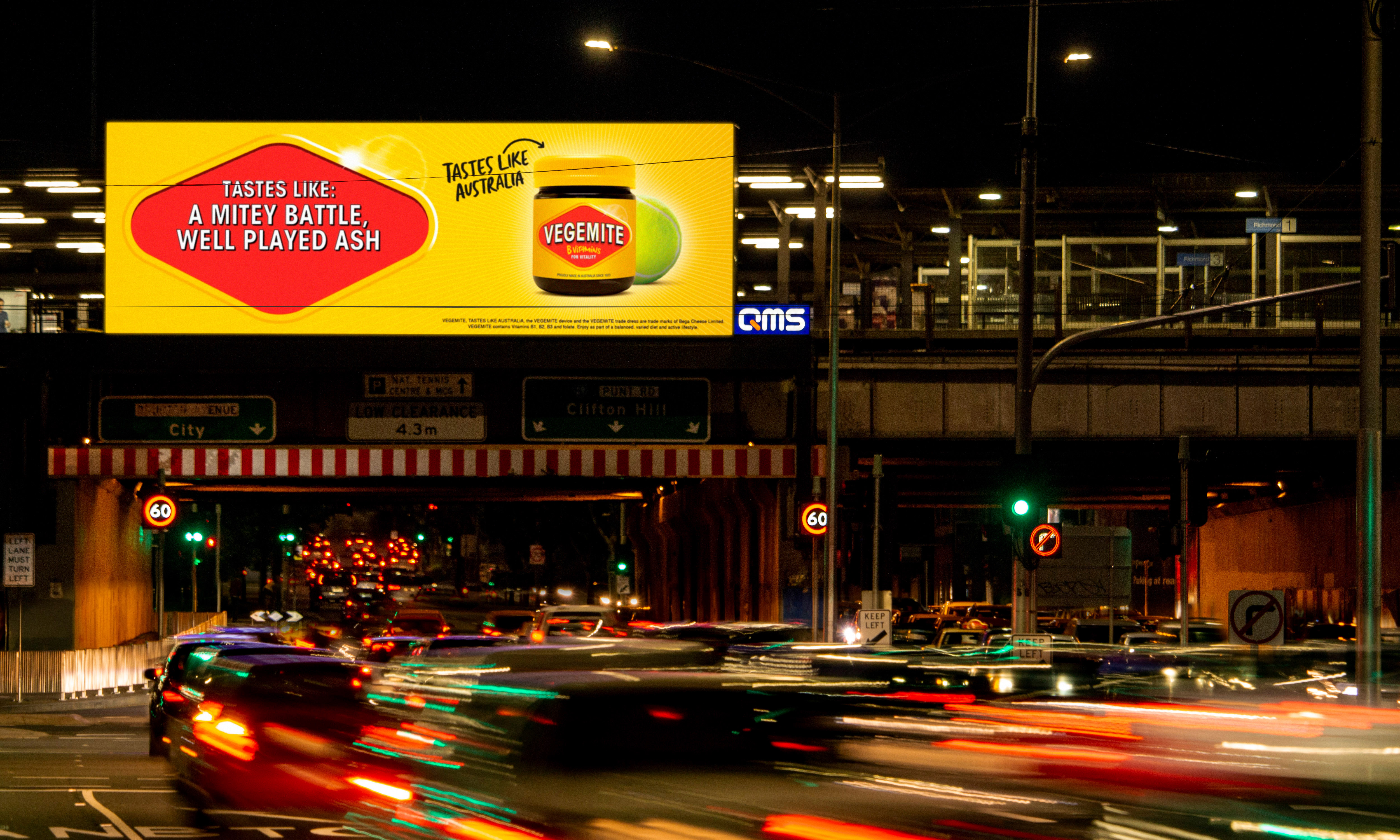 With Ash Barty’s summer tennis campaign coming to an end last Thursday, iconic Australian brand Vegemite turned its digital billboards across Melbourne into messages of support for Barty on behalf of Australia via Thinkerbell.

This follows a campaign that cheekily provided commentary throughout the summer of tennis, with live custom messages of Australian pride and Barty Party support displayed across some of Melbourne’s most iconic digital billboards. Vegemite broadcast one last Barty Party message of support – “Tastes like: A Mitey Battle, well played Ash” – at the end of Barty’s match on Thursday.

Vegemite and Thinkerbell raised the stakes again this year as they broadcast their custom and live messages of support and Barty Party pride across 19 premium QMS digital billboards.

Working collaboratively with QMS, Thinkerbell had access to a custom portal where they were able to log in securely, create and edit each billboard creative on the fly, before publishing it to be seen by thousands of Melbournians.

Says Ben Couzens, chief creative tinker, Thinkerbell: “This year we upped the ante with a lot more billboards across Melbourne to broadcast our bespoke Vegemite messages. The backend system that QMS have developed was amazing to use. It has totally removed the middle-man. The team at Vegemite and Thinkerbell were able to watch the tennis, come up with headlines about what was happening live on court, log into the system, update the artwork and despatch to all sites faster than you can say “Ash Barty”. The creative possibilities with this new system are endless.”

QMS general manager – strategy, Christian Zavecz said that advertisers like Vegemite and agencies like Thinkerbell are helping redefine what is possible when it comes to out-of-home: “Our continued investment into building world leading digital assets has meant that our backend systems can allow us to work hand in hand with advertisers and their agencies to tap into the truly dynamic nature of digital out-of-home with ease and simplicity.

“What we need now is for advertisers and agencies to throw out the old out-of-home rule book and to not be restrained by the thought that their creative ideas are too hard or expensive to deliver. The technology is here now and given how simple and easy it is to use, there is no excuse for digital out-of-home campaigns to simply be static messages.”

Vegemite’s Tastes Like Australia dynamic campaign was live across Melbourne throughout Ash Barty’s summer tennis campaign with some truly memorable and tongue in cheek messages like “Tastes like: The Barty Party is just getting started”, “Tastes like: Chucking a sickie to go to the tennis” and “Tastes like: Being Young Australian of the year, go Ash!”.