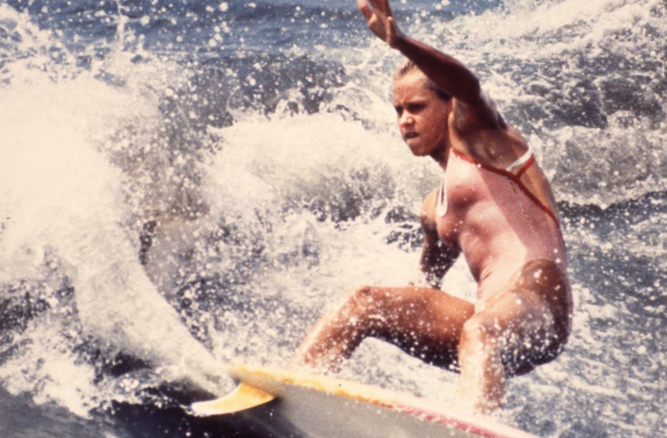 A ​FINCH​ and​ ​Pursekey Production​, ​Girls Can’t Surf​ has been a passion project of director Christopher Nelius’ (​Storm Surfers 3D)​ for half a decade. The film is set in the 1980s ​world of professional surfing – a circus of fluro colours, peroxide hair and radical male egos. Surf culture is the hottest thing on the planet and male surfers the main event. Meanwhile, women in surf are being treated like a sideshow, being paid a tenth of the prize money and relegated to holding contests during the men’s lunch breaks. ​Girls Can’t Surf​ i​s the untold story of how that ragtag bunch of inspiring characters broke loose to turn women’s surfing into the billion dollar industry it is today.

Girls Can’t Surf​ will feature in Tribeca’s special ‘Women At Work’ Program that explores the culturally pressing question ‘what does it mean to be a working woman today?’. Tribeca has curated a group of documentaries that seek to answer it across industries from sports, science, and law enforcement. These films consider how women in the workplace have struggled and thrived and always gotten the job done.

Says Nelius: “I’m incredibly excited to see ​Girls Can’t Surf​ have its world premiere at the Tribeca Film Festival – about as far from the Australian beach as you can get. It’s a sports story but so much more and being included in the new Women at Work section is a real recognition of that. It’s a great time to look back on a story that’s never been brought to the screen before but most of all I can’t wait for people to meet these charming characters who really captured my heart.”

Says Michaela Perske, producer, Pursekey Productions: “Having the film accepted into Tribeca is a testament to the incredible team behind ​Girls Can’t Surf​ . We can’t wait to share the incredible stories with audiences.”

Says Michael Hilliard, executive producer, FINCH: “We were immediately hooked all those years ago when Chris first shared his idea to uncover this important, underappreciated story that featured an incredible cast of women that was most importantly a very fun, warts and all ride back to the 1980s, that is more relevant today than ever.”

Girls Can’t Surf​ will be released in cinemas across Australia by Madman Entertainment later this year. The project has also received principal production investment from Screen Australia and is financed with the assistance of Screen NSW, with additional investment from co-producer Whipped Sea.