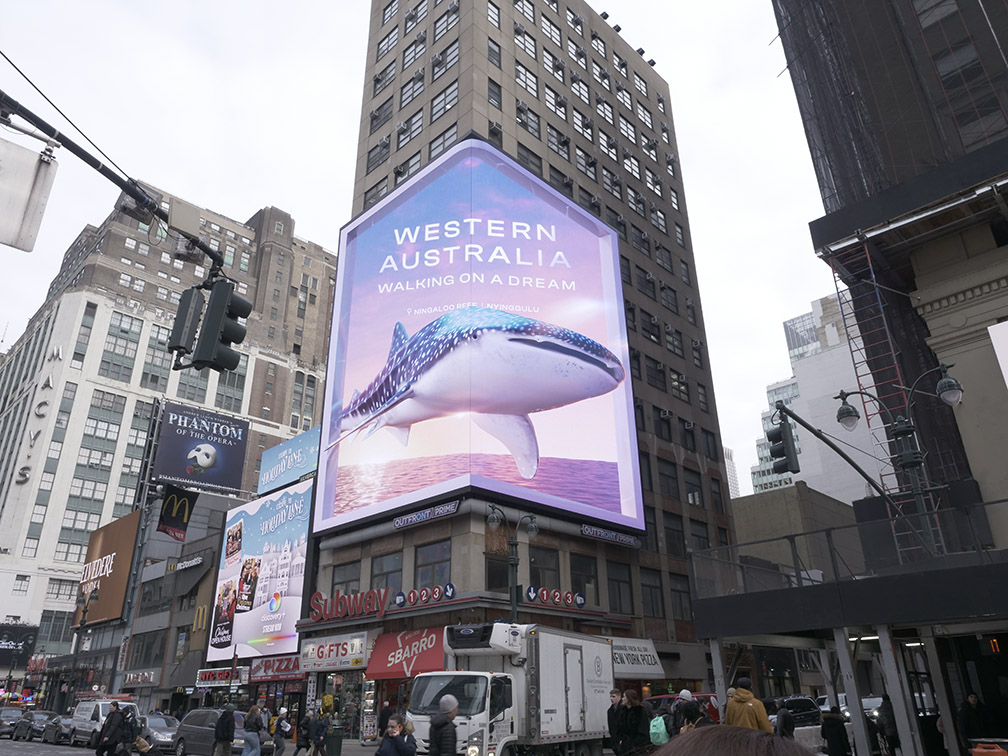 Western Australia has been showcased on a global stage in Times Square, New York City, as part of New Year’s Eve festivities.

To launch its new ‘Walking On A Dream’ global tourism brand in the United States, Tourism WA placed innovative animations at four three dimensional (3D) billboards in and around Times Square from 26 December 2022 to 1 January 2023, with each animation featuring the iconic floating whale shark from Ningaloo Reef highlighted in the brand campaign creative.

Placement locations included ‘The Cube’, a highly coveted advertising space which was in the centre of the action for the midnight ball drop at T imes Square.

A fifth, smaller site in the 42nd Street subway station featured a 2D animation of Walking On A Dream imagery from the Margaret River Region. 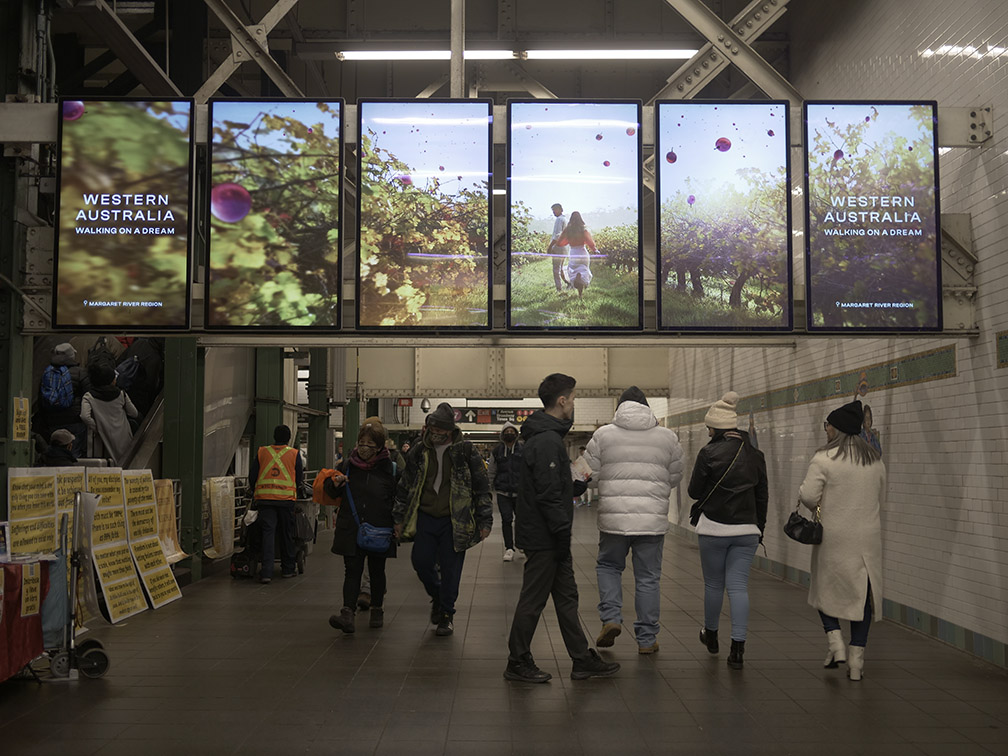 Tourism Western Australia Managing Director Carolyn Turnbull said Walking On A Dream is all about building brand awareness and driving consideration for Western Australia as an aspirational destination in the minds of T ourism WA’s global target market, the high yielding traveller.

“This Times Square activation has been an incredible way to start the new year and launch Walking On A Dream in the US market. These high-impact 3D animations presented a dreamlike experience of Western Australia at one of the biggest parties in the world, and let a massive audience get a taste of the wondrous experiences our state has to offer,” Turnbull said.

“In the United States, we know high yielding travellers are especially drawn to Western Australia’s aquatic and coastal experiences, so using the floating whale shark from Ningaloo Reef – a hero moment from our Walking On A Dream brand films – was a simple but powerful execution designed to connect with the US audience.

“Walking On A Dream aims to elevate Western Australia as a world-class destination in today’s highly-competitive global travel marketplace, and this intriguing scene of a majestic whale shark, serenely floating above the ocean at sunset, was the perfect way to command the viewer’s attention amid the cold, bustling crowds of New York City over the holiday period.”

Steve Hare, Head of Client Service, Initiative said: “Continuing the ‘Walking of a Dream’ global brand launch we targeted New York’s New Year’s resolution moment, a key destination decision moment, through bold attention-grabbing 3D media placements reaching millions of overseas travellers. This is another huge highlight in a huge year for Tourism Western Australia and we already have more plans in place, so watch this space.”

The high-impact New York City advertising initiative was supported by the WA Government as part of the $15 million launch of Walking On A Dream, which was funded through the WA Government’s $195 million Reconnect WA package.

Included in the Times Square activation was a Tourism WA partnership with New York-based Australian coffee franchise Bluestone Lane. The café chain distributed complimentary Walking On A Dream-branded flat whites to New Yorkers at their 11 Times Square store on 27 December, with coffee sleeves directing customers to a dedicated landing page for holidaymakers on westernaustralia.com.

As part of Tourism WA’s broader US brand launch, Walking On A Dream advertising will also be published by US luxury travel magazine Travel & Leisure, reaching nearly 9.5 million readers across their December/January and February print editions, as well as across the outlet’s online channels and its affiliate’s digital platforms.

The Walking On A Dream brand films were also shown to over 1.4 million New Yorkers through geo-targeted posts via Tourism WA’s social media channels. 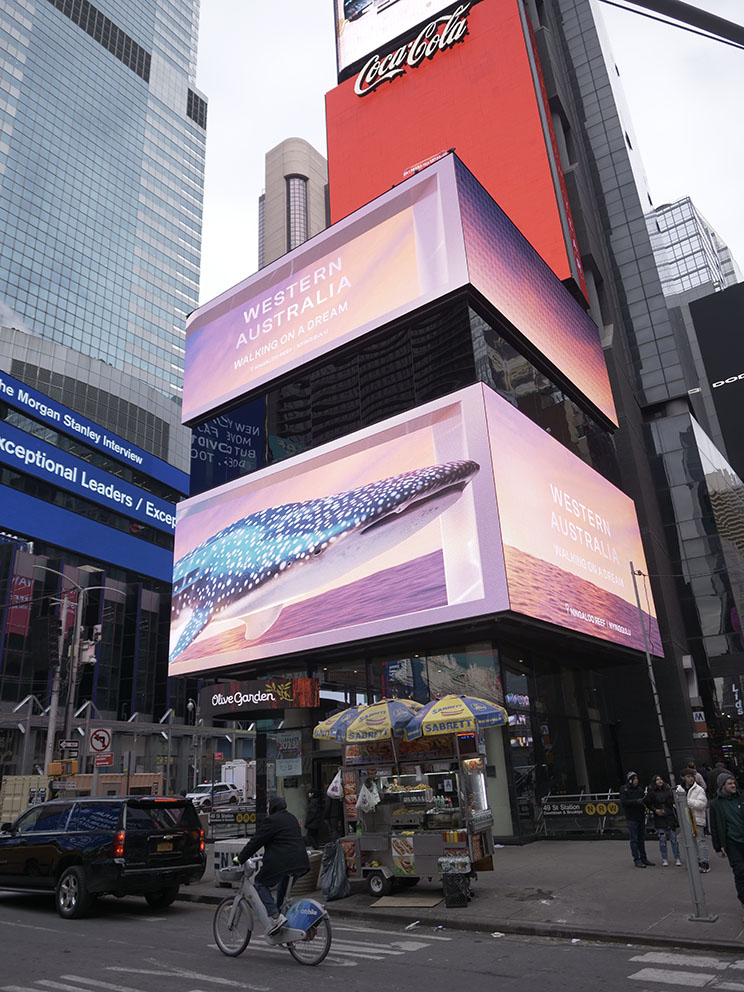 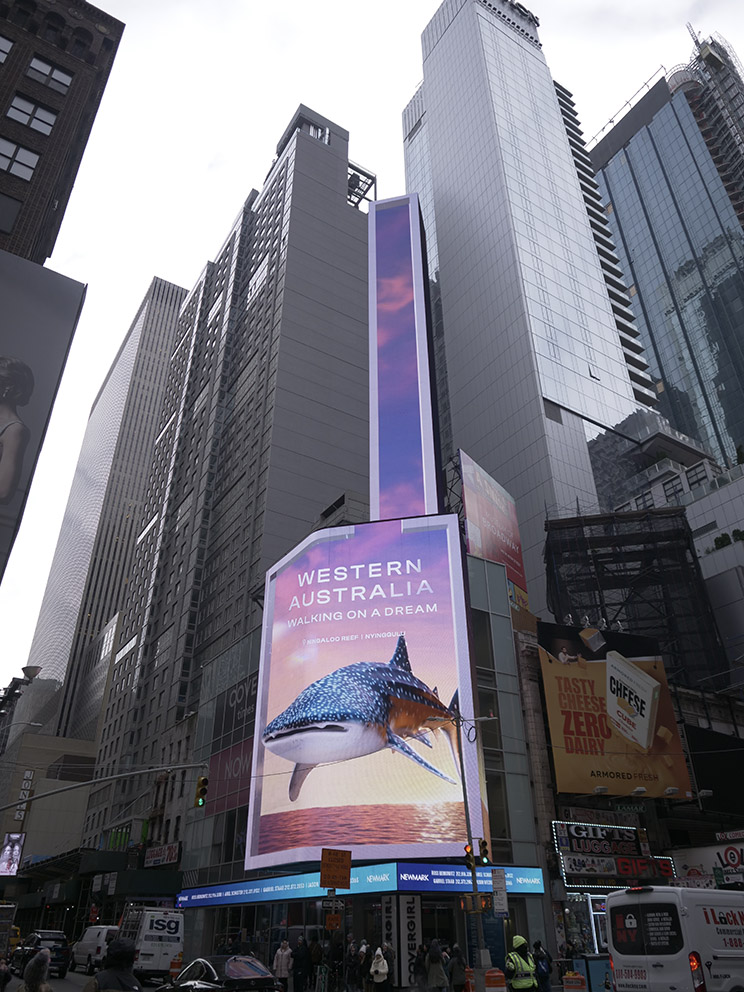