TikTok has launched a major new brand campaign developed by Saatchi & Saatchi New York, which is kicking off in Australia this week. Featuring a cameo from culinary icon and entrepreneur Martha Stewart, as well as some of the biggest and brightest TikTok creators in Australia and around the world, this campaign’s entertaining creative concept is set to intrigue Australians to jump on the TikTok app and enjoy the thumb stopping content for themselves.

The ‘You Have To See It’ campaign showcases the incredible storytelling magic that is being shared by TikTok creators every single day. The platform is home to unexpected and compelling content, from baking tips, cleaning hacks and hilarious comedy, to DIY, pet grooming, every sport you can imagine and even ASMR. At the heart of this content is harnessing the organic behaviour of TikTok fans trying (and sometimes hilariously failing) to describe their favourite content, knowing that really, you just ‘have to see to it’. The richness of the TikTok platform, and the unexpected joy its community have in sharing and explaining their favourite videos, provided the insight for this through-the-line campaign.

Bringing this concept to life, the hero global spot features well-known TikTok creators including @tinx, @ghosthoney, @alexisnikole and @brookeab, as well as cameos from Martha Stewart, as they each dramatically retell the moment in @samanthartsoe’s viral TikTok video where she discovers an abandoned mystery apartment behind her own bathroom mirror. The spots will run across placements on free to air TV, BVOD, cinema screens and online video.

TikTok will also roll out local market specific executions that that zero in on original and quintessentially Australian content that is entertaining, informative and sometimes downright unbelievable – from the iconic mash-up of Fairy Bread Pancake Cereal, to the awesomely shocking moment that a venomous sea snake is tamed by a paddle boarder. The creative utilises text and voiceover to humorously, yet cryptically, describe uniquely and homegrown TikTok content, and pique viewers’ interest to check out the full TikTok videos for themselves. These executions will run across OOH, digital video and display, FM radio, and video/audio streaming platforms.

OOH channels will drive awareness of the ‘You Have To See It’ campaign across key summer moments with tactical placements nationwide across a range of formats, from retail and street furniture to digital and static large format and station dominations during major sporting events. When the moment is right, ‘You Have To See It’ creative will also include a QR code that can be scanned using any smartphone camera to view the TikTok referenced in the placement. 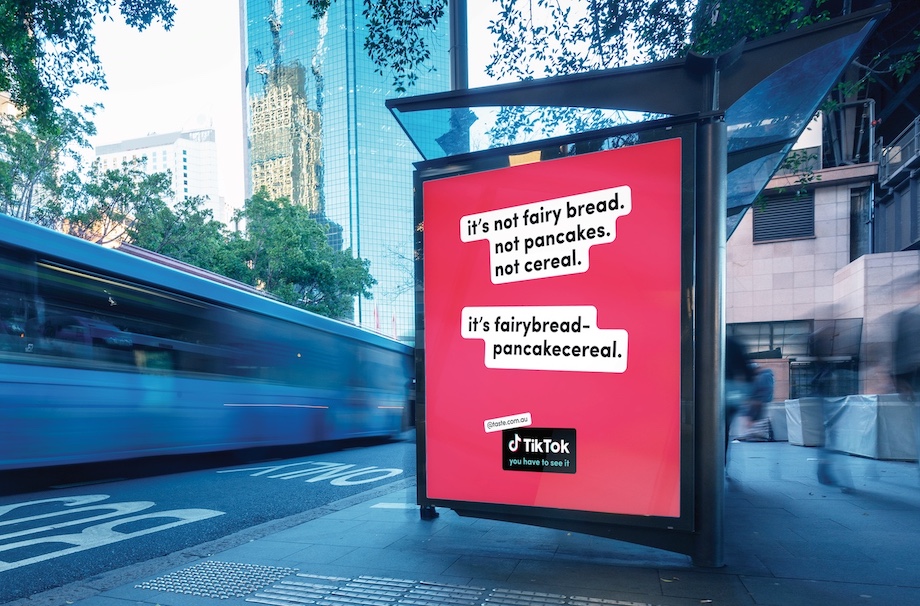 Says Serena Leith, marketing director at TikTok Australia & New Zealand: “We are so proud to announce the launch of our major new brand campaign, harnessing the wonder, joy and hilarious frustration so many TikTok fans have in trying to describe their favourite content. Working with some of the best and brightest Aussie and global creators, we have devised a multi-channel and highly contextual campaign, with media and experiential touchpoints planned across some of the biggest and most loved cultural moments and channels over the long Aussie Summer.”

Launching just in time for Summer, phase one of the ‘You Have to See It’ campaign will run from mid-November until the end of the year, with phase two rolling in January.