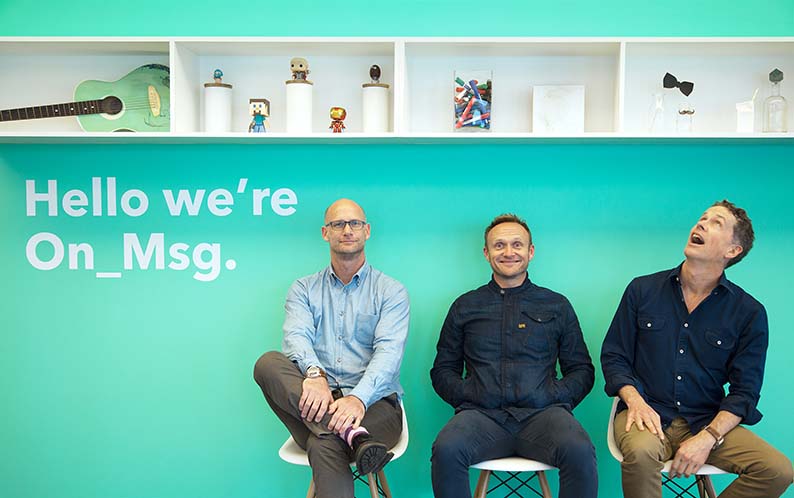 Founders of Sydney-based independent agency The Works have launch what they claim is Australia’s first messenger based social media company, On Message, which aims to provide clients with innovative and engaging solutions to uniquely communicate with their audience.

The start-up concept was developed by The Works founders Douglas Nicol, Damian Pincus and Kevin Macmillan (pictured) with Australia reporting a revolutionary increase in the use of messenger based apps such as Snapchat, WhatsApp and Facebook Messenger recording user numbers that now exceed the traditional top four social media platforms.

Says Nicol: “The Works prides itself on being innovative and putting creatives at the forefront, On Message has been developed from this forward thinking attitude and we are excited to be thought leaders in how brands will be communicating through messenger apps and have already begun discussions with various leading brands which has been met with a really positive response.”

“The shift in platform popularity has caught many marketers off guard and they are unaware on how to best engage their customers who are moving from being a wider audience to becoming an individual. If we look to China and the success of WeChat you can see a future where brand engagement, customer service and e-commerce has become one seamless and open ecosystem, a shift that we can already see with consumers and their social media behaviour in Australia.”

Encouraging brands to rethink their approach to engagement, service and utility On Message creates conversation marketing, forcing brands to be relevant, reactive and responsible in how they behave.

Says Nicol: “This is so much more than a new version of SMS, it is a tectonic shift in how apps are developed and used. Chat platforms are the next great outlet where brands integrate their services and engagement into the customer’s message stream eliminating the once hard to manage, stand-alone brand apps.”

Offering an ever widening spectrum of messaging marketing programs, On Message produces fun customer engagement tools including custom keyboards, stickers and GIFS through to bot development, e-commerce and payment integration.

Adds Nicol: “Australia produces some of the best tech talent in the world and up until now there has been little opportunity to retain or attract international talent to the country, On Message is a fantastic platform for up and coming developers to be positioned as industry leaders and showcase their expertise.”

The start-up was conceptualized in late 2015 and is focused on working with leading social media brands and building a team of Australia’s primary tech developers with the first work to be launched in the next few months.