Samsung: The Silent Whistle
Leo Burnett, Sydney
40% of Australians suffer from some form of hearing-impairment.
Meaning that, regardless of their ability, hundreds of thousands of young athletes are excluded from regular team sport because they can’t hear the referee’s whistle when it’s blown.

To help solve this problem, we created an app for the Samsung Galaxy Sport watch that leverages its in-built microphone to pick up the frequency of a referee’s whistle and send an instant vibrating alert to the hearing-impaired player.
Enabling the deaf to finally be included in regular team sports.

Bonds: Bonds Reloved
Leo Burnett, Melbourne
The fashion industry generates a lot of energy and waste. That’s why Bonds – one of Australia’s oldest and most iconic fashion brands – created the ‘Re-loved’ range, made from up to 45% recycled material. And when it came to launching their first sustainable range, we wanted to do it in the most sustainable way possible.

So we developed a digital campaign made entirely of re-loved material. Instead of creating anything new, we re-loved 100 years of Bonds’ most iconic advertising. In doing so, we created an entire digital suite of content without creating a big carbon footprint. 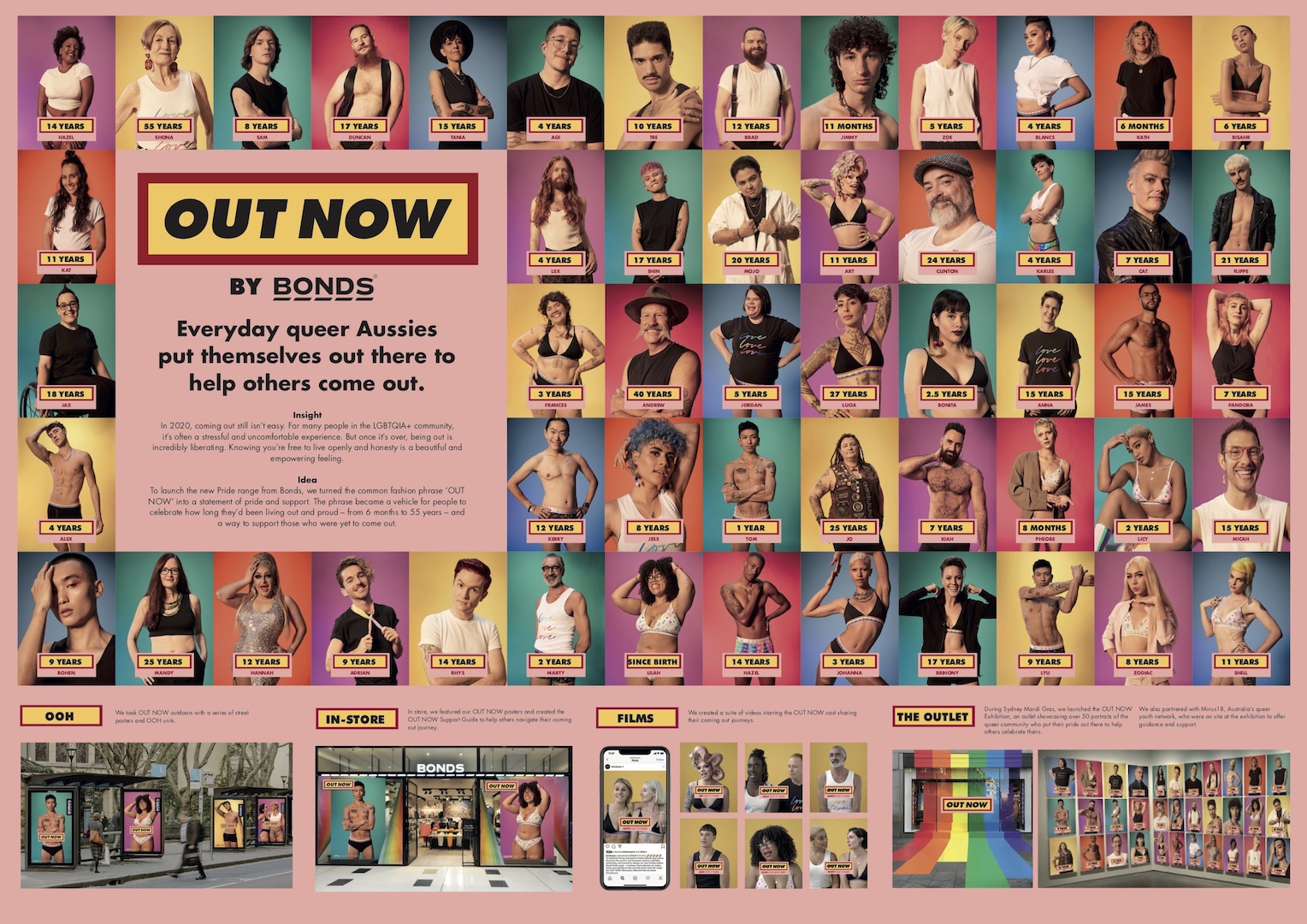 Bonds: Out Now
Leo Burnett, Melbourne
For LGBTIQ youth, coming out in Australia still isn’t easy. To celebrate Bonds first ever pride range, we transformed the common fashion phrase ‘out now’ into a powerful mechanism of pride and support. Launched in partnership with queer youth network Mins18, the project featured a diverse range of queer Aussies celebrating how long they’d been living out and proud, as a way to help those who might be struggling to come out.

Samsung: Sponsored Posts
Leo Burnett, Sydney
We needed to launch the Samsung A-Series phone by using influencers to influence the un-influencable, Generation Z – the generation who don’t fall for brands who use influencers to plug their products.

So our social campaign #SubtlySponsoredPosts, used four willing influencers to poke fun at the whole idea of influencer sponsored posts, whilst blatantly plugging all the features of the new phone.

The campaign included a 2 minute music video, and a full suite of #SubtlySponsoredPosts created by our influencers and even our audience.

Samsung: The Samsung PreReviews
Leo Burnett, Sydney
No new product launch gets more media attention than the iPhone. Every review, every Unboxing is iPhone, iPhone, iPhone. So as its biggest competitor, Samsung had to do something to divert the attention away from Apple and to the launch of the new Galaxy Note10.

Introducing The Samsung PreReviews: A campaign of contextual YouTube pre-rolls that played just before people were about to watch a review of the new iPhone.

Stealing the spotlight from our major competitor and highlighting features that the Note10 has, that the iPhone doesn’t. Right at the moment they’re thinking of buying a new phone.

WonderCool Lullaby News
Leo Burnett, Melbourne
Sleep is vital for babies. But getting them  there can be an ordeal – one so demanding, it can cut parents off from the outside world.

To launch Bonds Wondercool baby range, we created Lullaby News – a series of responsive, real-time radio ads that kept parents informed of the day’s biggest stories while singing their babies to sleep. Each day for several weeks, we searched news outlets for the biggest talking points. Writing  the collective new stories to the tune of “Twinkle Twinkle Little Star”. Each spot was created in the morning and recorded that afternoon, making every piece that aired  feel current. By choosing Spotify and Kinderling, we were able to be hyper  targeted at the times when parents were putting their babies to sleep. Lullaby’s once were used to help babies sleep. Now, they can help parents stay informed.