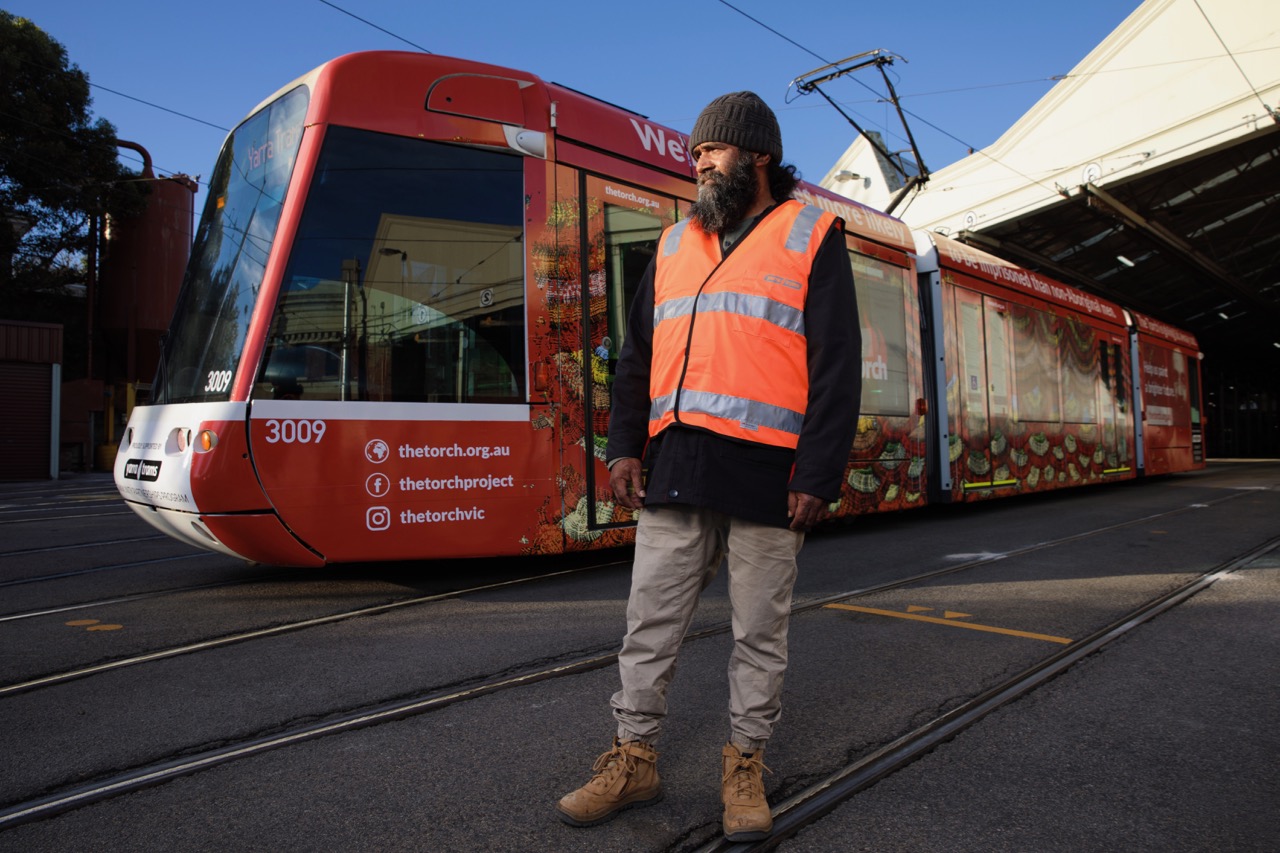 The Torch is supporting Incarcerated Indigenous Australians to Get Their Lives Back On Track with the launch of its latest awareness campaign proudly supported by Yarra Trams Community Partnership Program, which seeks to shed light on the confronting rates of incarceration amongst the Indigenous population.

Last week Melbourne not-for-proﬁt, The Torch, launched its new awareness campaign, created by Melbourne creative agency Hedgehog, as part of the 2019 Yarra Trams Community Partnerships Program. Since 2011, The Torch has delivered its Indigenous Arts in Prison and Community program throughout Victoria, providing art, cultural and arts vocational support to Indigenous offenders and ex-offenders in an effort to minimise their likelihood of reoffending.

As one of the eight recipients to share in the annual $1 million advertising value program, The Torch has chosen to use this valuable brand exposure as an opportunity to shine a light on one of our country’s most harrowing statistics — the reincarceration rate of Indigenous Australians.

The launch of Community Partnerships tram coincides with the release of an independent evaluation, completed by EMS Consultants of The Torch’s Indigenous Arts in Prison and Community Program. The evaluation found that the program significantly increased the social and emotional wellbeing of participants in prison and on release and had raised over $280K in sales and licencing to support participating artists. From participants surveyed, the results showed that The Torch’s post release program had significantly helped them to stay out of the justice system.

One artist noted: “It’s because of the support that you get from Uncle Ray and Kent, it’s a big deal. The guidance they give you to help with your art is really good. The program helps you stay out of prison. If I didn’t have it, I’d be back in jail.”

First Nations Australians make up less than 3% of the Australian population yet represent 27% of the national prison population.

Those who have been incarcerated previously are at higher risk of re-offending. In 2016-17, the recidivism rate for Aboriginal prisoners in Victoria was 53.4% compared to 42.8% for their non-Aboriginal counterparts.

The Torch’s program supports the development of self-esteem, confidence and resilience to the re-offending cycle through cultural strengthening and artistic expression.

The majority of Torch In-Community participants (92%) confirmed that being part of the program has helped them stay out of the justice system. Importantly, data gathered on 2017-18 participants who had been in the In-Community program for over 12 months indicated only 11% had returned to prison. Compared to the 2016-2017 recidivism rate in Victoria of 53.4% for Indigenous prisoners and 42.8% for non-Indigenous prisoners, this result is impressive.

It’s confronting statistics like these that The Torch hopes will prompt action from the public in the form of art sales and donations.

Says Kent Morris, CEO The Torch and a Barkindji man: “100% of the proceeds from the sale of an artwork goes back to the artists. This means that when you buy a piece of art, you’re not only supporting a vocational pathway for the artists, but you’re giving them the tools they need to make a positive change.”

Artists from The Torch program have been forging a pathway into the art world and have had their artworks collected by the NGV, Museum Victoria, Shepparton Art Museum and a range of government, corporate and private buyers in Australia and overseas.

Says Kim Kennedy, a Ngiyampaa woman, whose artwork ‘4 Rivers’ features on the tram: “When I got out I had nothing. The money that I made from The Torch, selling my paintings, helped me set up my house. Kim’s 4 Rivers artwork has been the Torch’s most successful artwork in relation to licensing and has generated significant income for Kim as part of VACCHO’s Koori Rethink Sugary Drink campaign appearing on Indigenous football jerseys, bags and thousands of water bottles.”

Melbourne will see one of its trams, wrapped in larger-than-life Aboriginal designs based on the works of two artists from The Torch (and designed by Melbourne creative agency, Hedgehog), hit the tracks for the next three months. 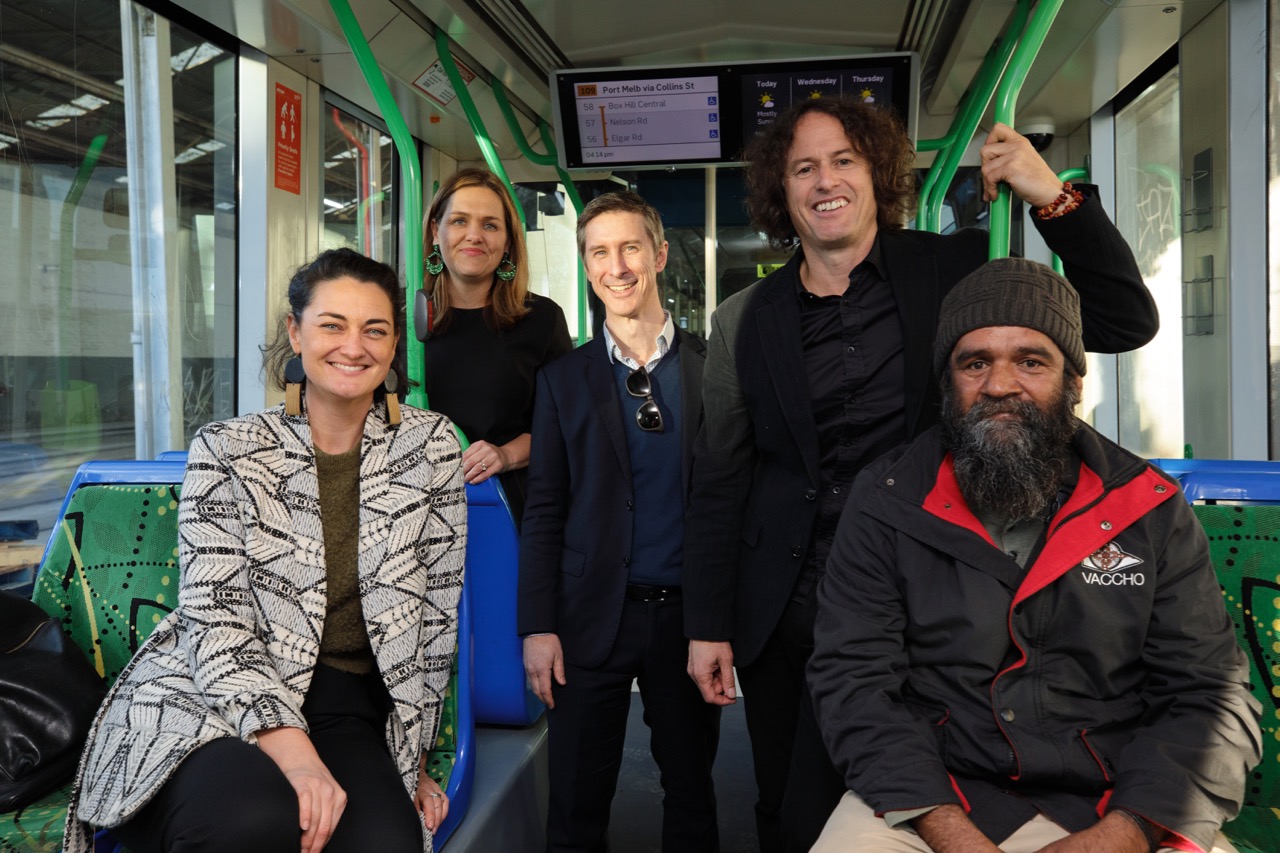 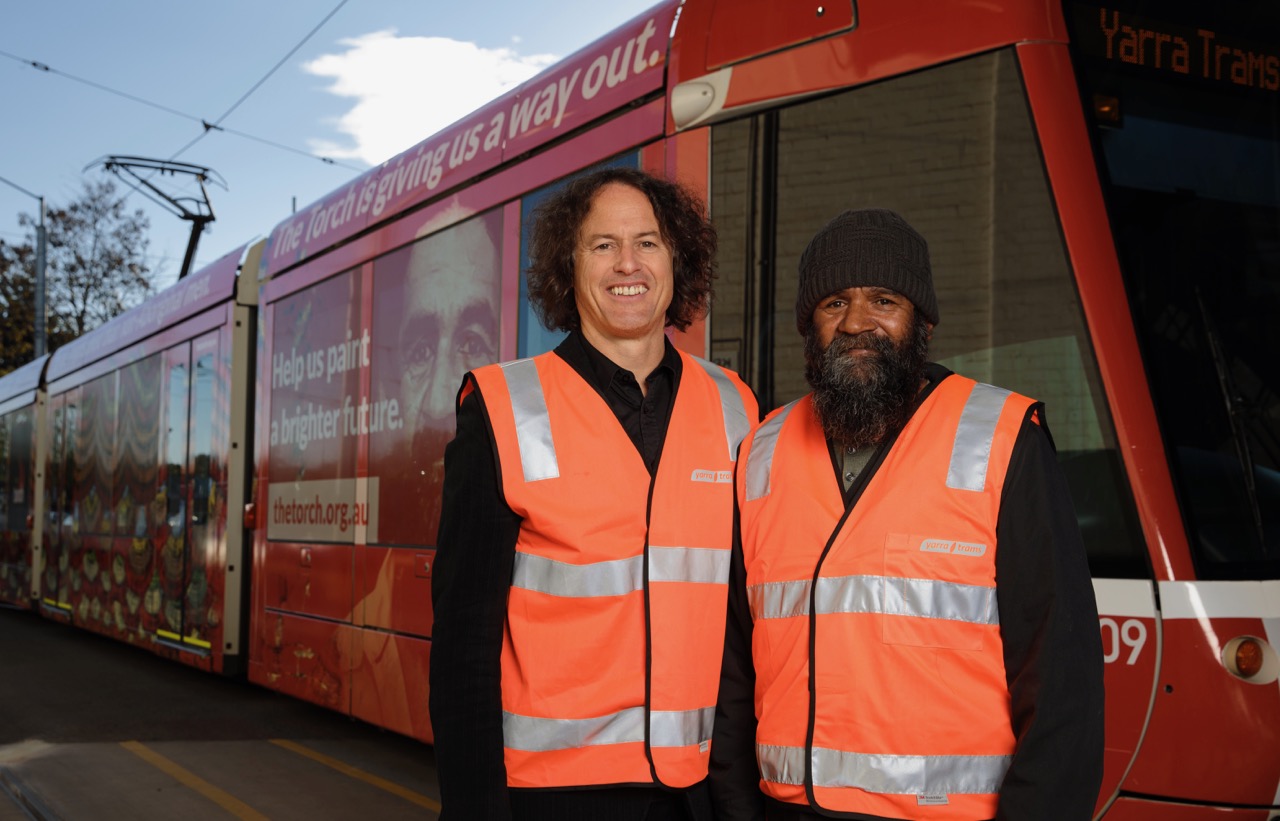 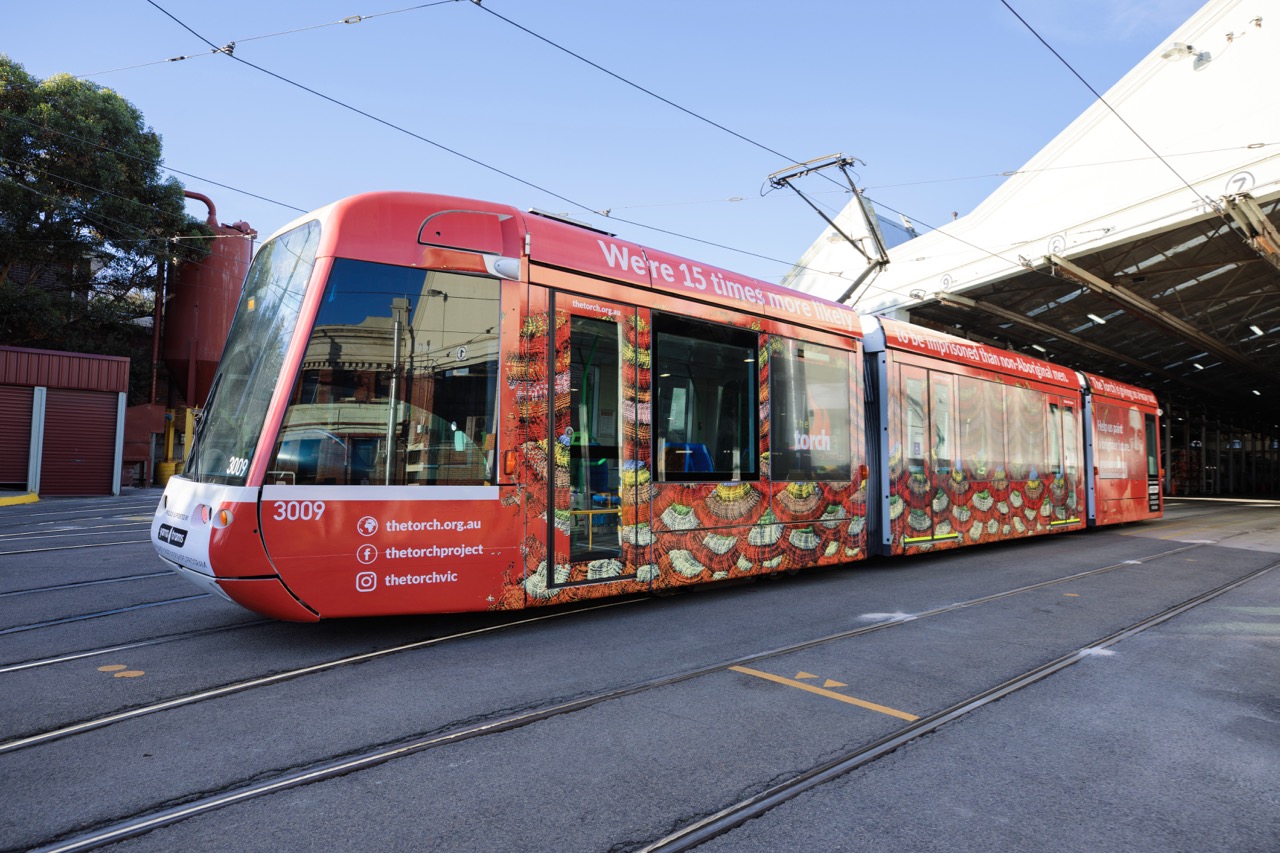 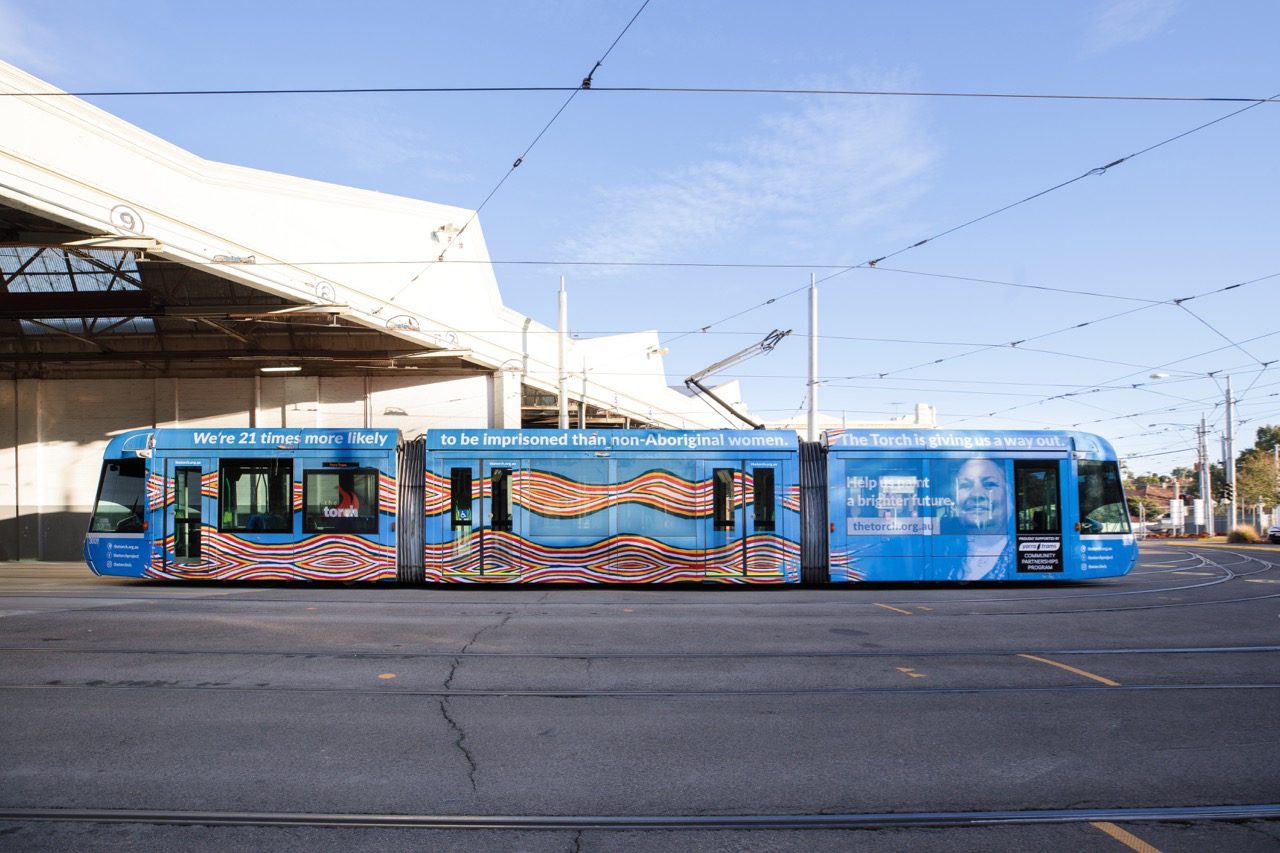