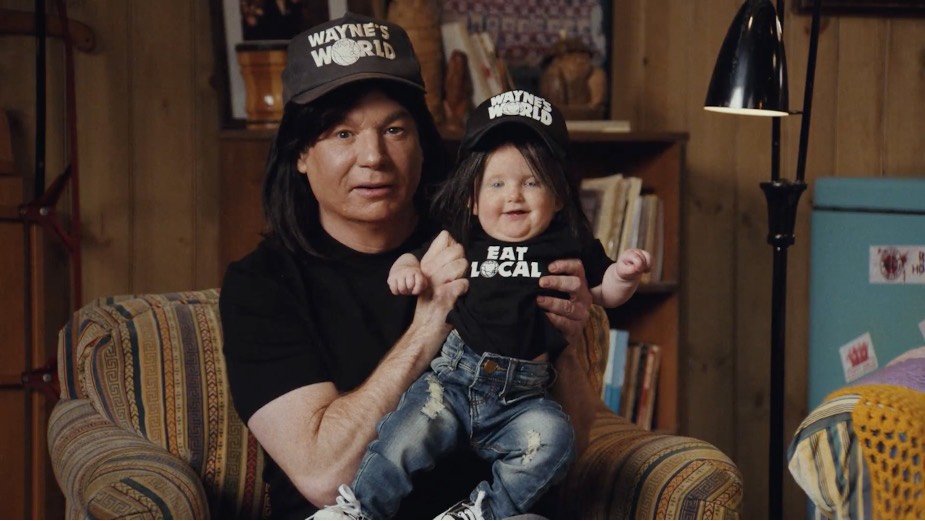 I (LBB’s North America editor Addison Capper) will be honest. When I saw there was going to be some kind of Wayne’s World revival in a Super Bowl ad I was excited because, well, Wayne’s World, but also VERY sceptical that it could be not very good. I WAS SO WRONG. I love this ad. Mike and Dana, bar a few wrinkles and what looks like quite a sizeable amount of makeup, have still got it as Wayne and Garth. The cameo just works – Cardi B the typical dream that she is in every ad she’s in. The production is on point in that it all looks and feels just like the movies I would quote as a kid in a bid to replicate my dad. *You kiss your mother with that mouth?*

Anyway. I wanted – needed – to know about the process of making it. I chatted to William Gelner, CCO, Special Group US, SMUGGLER director Guy Shelmerdine, and Casey Smith, composer at New Math Music.

LBB: When you first got the brief of a Super Bowl ad for Uber Eats, how did the project look? What were your thoughts when you got that brief? And when did Wayne’s World come into the conversation? And why Wayne’s World?! How did that little idea of ‘Eat Local’ end up there?

William: This fall, we launched our Uber Eats campaign with a celebrity face-off between Sir Patrick Stewart and Mark Hamill followed by a match-up on the gymnastics floor between Olympic medallist, Simone Biles, and ‘Queer Eye’ star Jonathan Van Ness.

So when we got the brief, the question was, how do we continue surprising and entertaining people but also do something with real meaning?

We knew local restaurants have been hit hard by the pandemic and deserve our support. We landed on the idea to eat local fairly early on. Once that became the cornerstone, who better to tell audiences to support local than the OG’s of local access TV, Wayne and Garth.

The beauty of Wayne and Garth is that they cross several generations because they’re so likeable and fun. While younger audiences may not remember Wayne & Garth, they will get a true glimpse into a duo that was a significant part of late ‘80s and early ‘90s culture. Plus, we have the amazing celebrity cameo of Cardi B so the viewers get nostalgia mixed with modernity.

LBB: Once you had that idea, you had to get access to the Wayne’s World franchise, Mike and Dana. How did you go about that? What was their reaction?

William: We worked on a pitch deck which was presented to Mike and Dana. Mike immediately liked the idea of using the Wayne and Garth character to support local restaurants.

LBB: When it came to the script, what was the writing process like? How did you put yourself in that state of mind? Were Mike and Dana involved at all?

William: There was a lot of prep work that went into creating the scripts. It was a collaborative effort on multiple zooms with Mike and Dana. Throughout the process we were continuously impressed with Mike’s meticulous focus on his craft — working with him and watching the scripts come to life was like taking a master class in comedy. We learned, for example, that sometimes the joke isn’t the joke, but rather it’s the time needed to bask in the aftermath of the joke that’s funny.

LBB: And the Cardi B cameo is so wrong it feels so right! Were there any other names in the mix? How did you get her involved?

William: Cardi B was great to work with. She brought so much to the set. Surprise, energy and fun.

LBB: And then there are all the little digs at advertising in general. I imagine that was fun to write in. How and why did you do that?

William: The Wayne and Garth characters are pretty self deprecating and like having fun taking jabs at marketing tropes. As it turns out, Super Bowl advertising is also known for that. Felt like it was meant to be.

LBB: Why was Guy Shelmerdine the right director to bring this to life?

William: Guy is able to pull those performances out of talent like no other. He is meticulous in capturing the authentic world of the talent and works in magical ways so they shine in a way that feels authentic to them.

And here’s the other thing about Guy. Often in comedy, many directors don’t have the most cinematic feel to it but Guy’s work does. It’s filmic. And you feel like you are in a world that is exactly right for those characters.

LBB: Guy, what were your initial thoughts when this script came in? And what kind of place was it in when you received it?

Guy: When I received the original scripts I was really excited about the concept of Wayne’s World advertising local restaurants. The original scripts were completely different to the ones we ended up shooting. Dave Horton and Matthew Woodhams-Roberts the creative team at Special Group worked tirelessly over several weeks to develop the material with Mike Myers and Dana Carvey.

LBB: I also heard that you two are old creative partners. How was it to work together on this?

Guy: I felt very fortunate to collaborate with an old friend on this. I think it worked incredibly well and we both had some good laughs in the process.

William: I was fortunate to be paired up with Guy at Cliff Freeman and Partners many years ago. It was a shop renowned for comedy storytelling where we both learned a ton. Being reunited on this project allowed us to bring some of that to the project.

LBB: Guy, possibly a dumb question but why was it something you were keen to be involved in?

Guy: I have been working with Special Group and Uber Eats for the past several months on some other campaigns, so I was keen to collaborate with them again. When they came to me with the Wayne’s World concept I was delighted as it happens to be one of my favorite 90’s movies. My other favorite movie from that period was Silence of the Lambs, but I am not sure that would have made a great ad for a food delivery service!

LBB: As a starting point, how did you go about making this truly look and feel like Wayne’s World? What were the main things you needed to think about and how did you tackle them?

Guy: I watched all the original Wayne’s World sketches and movies with my team. It was our goal to recreate the world authentically with 100% accuracy to every detail, so that wherever we pointed the camera it felt like Wayne’s real basement. My brief to my team was that Wayne and Garth have continued broadcasting their cable access show for the past 30 years, it’s just that we missed the last 600 shows.

LBB: Were you involved in the writing at all? If so, tell us about that process.

Guy: I left the writing to the experts, but I was able to be part of the development on Zoom meetings. They were an integral part of the creative process. During those meetings, the whole team including Mike & Dana all got to know each other and thus were very comfortable with the material by the time we got to set. We all felt very much part of the same team.

LBB: What were Mike and Dana like to work with? From a directorial standpoint, how much did you guide them? Or was it more about letting them stay true to their characters?

Guy: Both Mike Myers and Dana Carvey were extremely hands on and collaborative with the creative process and I actually learned a lot about the craft of comedy in the process. Working with such comedy legends kept me on my toes every step of the journey.

I was mostly focused on making sure Wayne and Garth landed in an environment that they felt extremely comfortable in. For me, that was making sure that spirits were high during the shoot both with the talent and all those on the other side of the camera. Due to the amount of stress that comes with tight schedules, celebrity cameos, and many ad dollars at stake it can be easy for the energy on set to go in the wrong direction. As a director, I think it is my duty to create the right vibe so that the talent has the perfect platform to do what they do best. In the case of Wayne and Garth, my goal was for them to be excited about being back in the basement and hosting their cable access show once again.

LBB: The location is super important too – that room is so iconic. Tell us about the production design and general location.

Guy: My production designer Tom Hartman studied the various versions of the basement that have been created over the years and then created his own model of the set in 3D so that we could get the exact basement dimensions just right. We sourced props from all over the country as well as some individual items created from scratch. I was really happy to see how excited Wayne and Garth were to be back in their own environment. Continue reading on LBB…