The Royal Australian Mint creates millions of new ways to donate with the launch of ‘Donation Dollar’ via Saatchi & Saatchi, Melbourne

The plan is to mint a ‘Donation Dollar’ for every Australian, creating 25 million reminders to donate.

As a nation we have been fast to adopt online and digital payment methods – ever more so since the pandemic. Sadly, a shift away from notes and coins has had unforeseen and significant consequences on Australian charities. Many of which rely on coin donations – as do the most disadvantaged members of our society. While the ways we use currency are evolving, coins and notes are still relevant. And, for many, necessary.

Each Donation Dollar is therefore designed to be a small reminder to give. And each one in circulation will create its own loop of generosity. If every Australian gave just one Donation Dollar a month, we could raise an additional $3 billion for our charities over 10 years.

Which is one of the reasons why the idea has had the full endorsement and support of the Community Council of Australia (CCA) – a collective of over 50,000 charity organisations.

Launching on International Charity Day, Donation Dollar is supported by an integrated campaign led by film, social and earned media, the latter being facilitated by Publicis Groupe agency, Herd MSL. 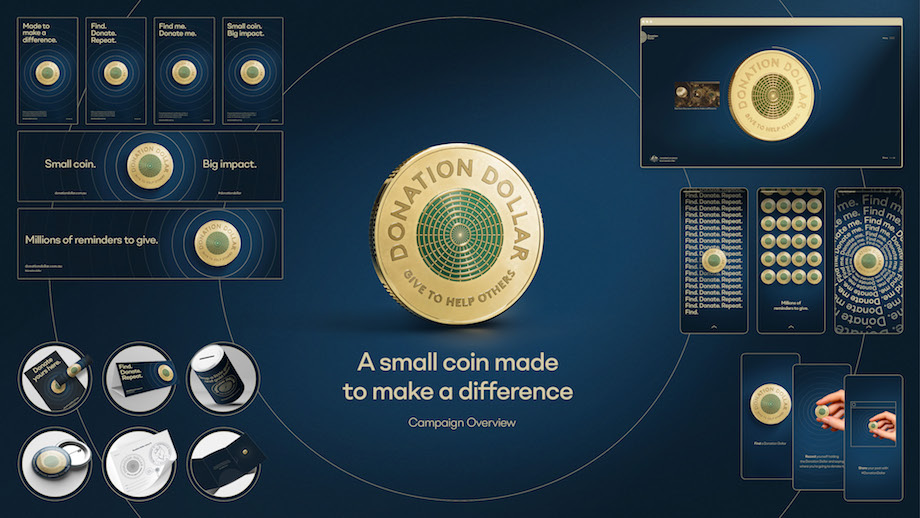 Says Simon Bagnasco, executive creative director, Saatchi & Saatchi Melbourne: “I am incredibly proud of the team behind this project. It is a rare feat to bring an idea to the world which helps all charities, not just one. And a special thank you to everyone at the Mint for the spirit of collaboration and enthusiasm they brought to this project.”

Says Mark Cartwright, executive general manager – marketing, sales and innovation, Royal Australian Mint: “This is a world first initiative that everyone at the Mint is very proud of. For over two years we have worked closely with our friends at Saatchi & Saatchi Melbourne to construct an approach that can make an extraordinary difference to Australians.

“We do hope that the Donation Dollars act as a gentle reminder that as individuals we have the power to help those that are doing it tough – the act of giving these dollars, multiplied over and over for many years, has the potential to make a significant contribution to the lives of many.”

Chair of The Community Council for Australia and former chief executive of World Vision Australia, Tim Costello, has shared his praise and support for Donation Dollar and the impact it will have on those who need a helping hand: “Our immediate reaction when presented with the Donation Dollar was ‘finally an idea that unites every Australian charity, but also every Australian, in a common good’. With research showing one in five Australians, who don’t currently give to charity at all, saying the coin would lead to them giving more to charity, there’s no doubt in my mind this is a gift that will benefit those who are most vulnerable in our nation, starting now – a time when many need this kind of helping hand the most.”