The Liberal Party outspent the Labor Party by 67 per cent in election advertising expenditure on TV, radio and press during the five week election campaign, according to exclusive analysis by advertising monitoring group, ebiquity.

The ebiquity figures show the Liberal Party spent $6.75 million, compared with the Labor Party at $4.04 million – a 67 per cent differential.

When comparing the total TV activity for the 2013 campaign against the 2010 campaign, the Liberal party increased the number of commercials run on TV by 15% while the Labor Party decreased their activity by almost 50%.

Says Richard Basil-Jones, managing director – Asia Pacific of ebiquity: “There is no doubt that donors flooded the Liberal Party with funds to spend on the campaign in the expectation they would win, which has worked in reverse with the Labor Party whose advertising fell away this year”. 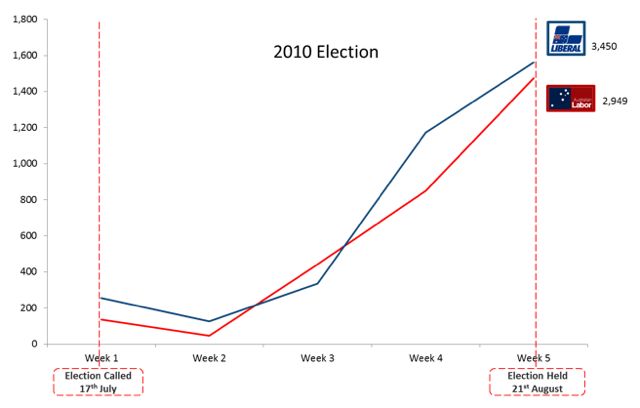 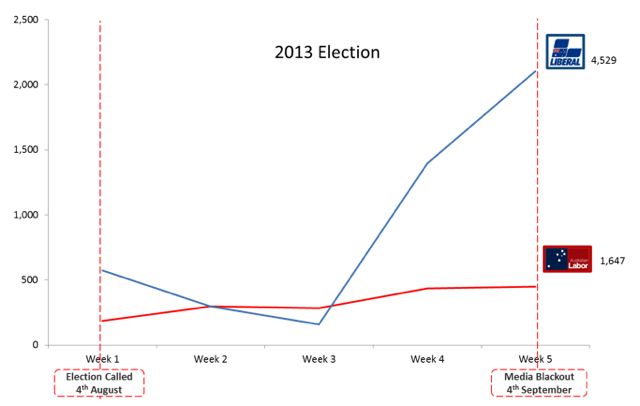 On TV, the Liberal party outspent the Labor party by nearly 4:1 in the final few days

Week 5 of the advertising campaign is a short week for political advertising on ‘electronic media’ (TV & radio) where a blackout is enforced from midnight on Wednesday, September 4. Even with the short week, the final two weeks dominated the advertising period spend accounting for 76% of Liberal and 52% of Labor activity

Week to Week Spend by Major Parties + All Other 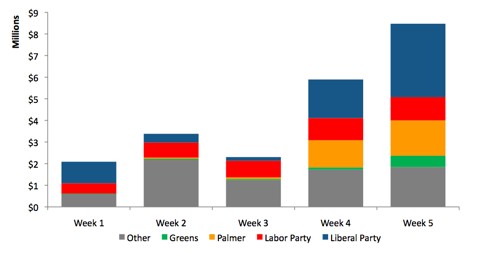 The big surprises in the campaign outside of the major parties’ expenditure was the emergence of two new players, The Palmer Party ($3.02 million) and Australian Salary Packaging Association ($1.4 million) in third and fourth place – outspending the Greens and the unions.

Mr Basil-Jones said “The Palmer Party made a big impact in advertising terms during the campaign, while the Salary Packaging Association responded quickly and effectively to the Rudd Government’s change of FBT policy in July”. 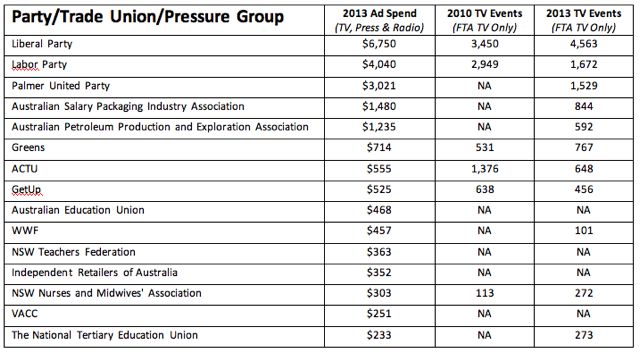 The Palmer Party’s Revolution TV commercial enjoyed the biggest individual spend of the campaign, while the Labor Party’s biggest ad – You Lose – ranked only fifth in the expenditure figures. 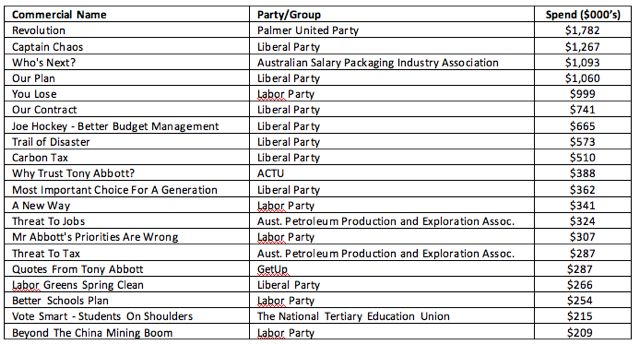 Both parties have run a similar number of commercials – 28 for Labor and 26 for Liberal – but the messaging content has been very different.

Labor led the charge with negative advertising in the first few weeks of the advertising campaign; however, the Liberal party has closed the gap in the past week.

Although the Labor Party has run more types of negative TV Ads, the Liberal Party have put more negative commercials to air. 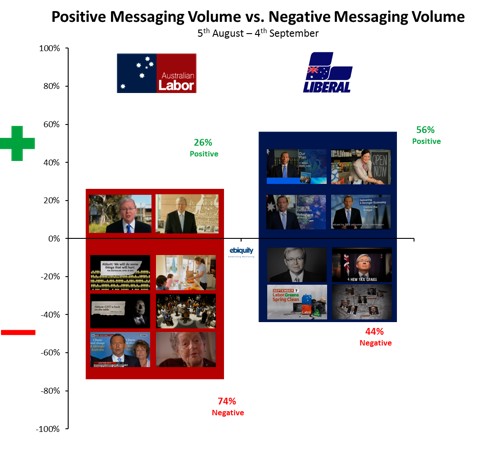