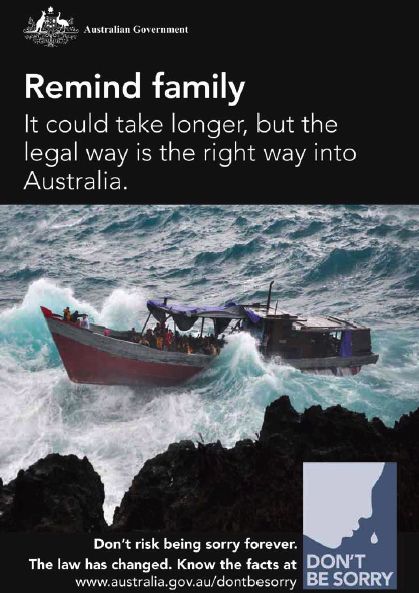 Produced in six languages, the campaign heroes high-profile cricketers Lasith Malinga and Muttiah (Murali) Muralitharan in an attempt to reach out and educate ethnic communities whose members often encourage family to seek asylum on risky boat journeys with people smugglers.

Says Brendan O’Connor, minister for immigration and citizenship: “The main emphasis of this campaign is to get diaspora communities to become ‘information champions’ who know about the increased humanitarian visa places, who know about the family migration option, and who are aware of the risks involved travelling to Australia by boat.

“We want them to tell their family and friends the law has changed, which includes the ‘no advantage’ principle whereby new arrivals are liable to be transferred to Nauru or Papua New Guinea, and be processed there no sooner than had they remained abroad and registered through UNHCR.

“Although this may take longer, the lawful way is the right way and the safest way into Australia.”

Says Jason Buckley, Y&R ANZ Group chief operating officer: “It’s wonderful we are able to help the broader community and we are delighted that our partnership with Charlie and the team from Diverse could make this happen.”

Says Charlie Tannous, Diverse Communications director: “Working with our strategic partner Y&R in developing and executing such an important campaign comes with a huge responsibility and we look forward to the ‘Don’t be sorry’ campaign having a positive impact on the diaspora communities in Australia.”

The campaign will run through to the end of May 2013.