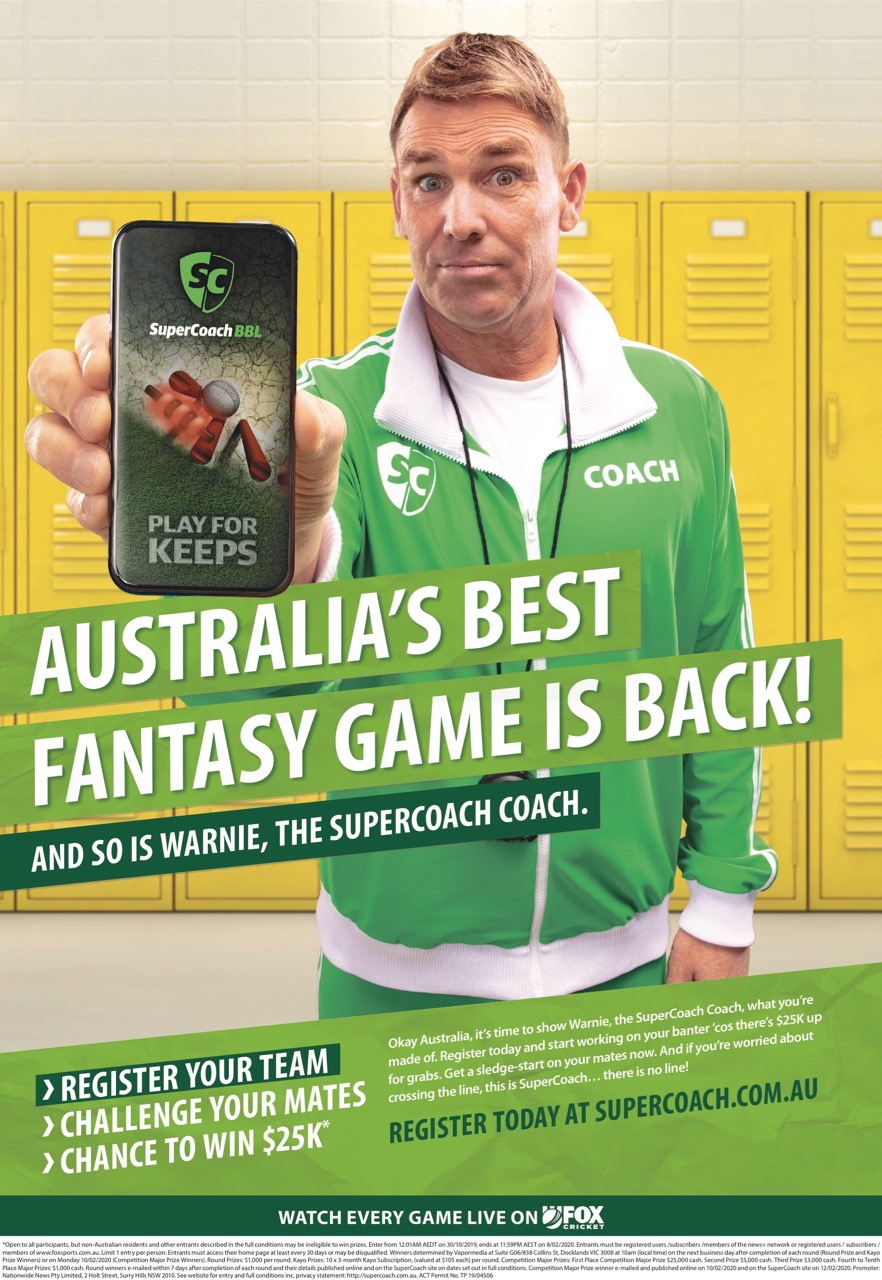 Supercoach BBL players this year have cricketing mastermind Shane Warne on their side, with the spin king returning for a second year, signing on as the supercoach’s coach. Fantasy sports competition Supercoach launched this morning across News Corp Australia’s key metropolitan and regional mastheads while high impact placements and double-page spreads will appear throughout the campaign, developed by The Works.

Advertisements and content for television, radio and social media begins Friday ahead of an integrated media campaign that will ramp up throughout the pre-season through to December 17 when the first ball is bowled.

The campaign is again built around Warne and marks the second year a major marketing promotion has supported the competition.

Supercoach will continue last year’s “Play for Keeps” theme with an array of SuperCoach-style headlines and a Back-to-Basics tagline based around “Batting, Bowling, Banter’, including advertisements featuring plays on Warne’s famous on-field banter. And players can even compete against Warne’s Club 23 Legends team.

Says Nathan Bilton, creative director, The Works: “As the SuperCoach Coach, Warnie is here to take your game to the next level; and part of that is raising the bar when it comes to banter.

“We were able to create a whole season of Shane-worthy sledges and content for multiple channels and formats.”

Says Warne: “SuperCoach BBL is back for 2019-20 which means the Club 23 Legends are ready to take down all comers.

“And if not, I’ll certainly win the commentary box banter.”

Key features will include close collaboration and integration between News Corp Australia’s mastheads and Fox Cricket, which also features Warne.

Warne will contribute articles and social media videos during the pre-season while players can look forward to regular tips and hints from Warne in addition to his regular appearances on Fox Cricket.

While much of the content will be free about a quarter of it will be bespoke, subscriber-only content.

The campaign aims to generate player registrations before changing tack during the season towards content designed to help stimulate player engagement, with the ultimate aim of driving digital subscriptions.

To help generate player registrations extensive audience data analysis will be used to send emails from Shane Warne to previous players of the Supercoach suite of games, whether they played the BBL, AFL, NRL or horse racing version.

Those players making a return this year to Supercoach BBL will also receive Warne’s personalised words of encouragement, whether to pick up their game for those who struggled last year or to keep up the good work if they had a good season.

Players will be in the running for a weekly $1000 prize while the competition winner can look forward to a $25,000 payday.

News Corp Australia’s general manager of digital consumer revenue, publishing, Brendan Collogan, said the promotion was a key plank in the broader campaign to produce high-quality content to drive subscriptions: “With Shane Warne once again leading our integrated campaign, along with our continued collaboration with Fox Sports, we’re expecting to hit a six or three this season.”