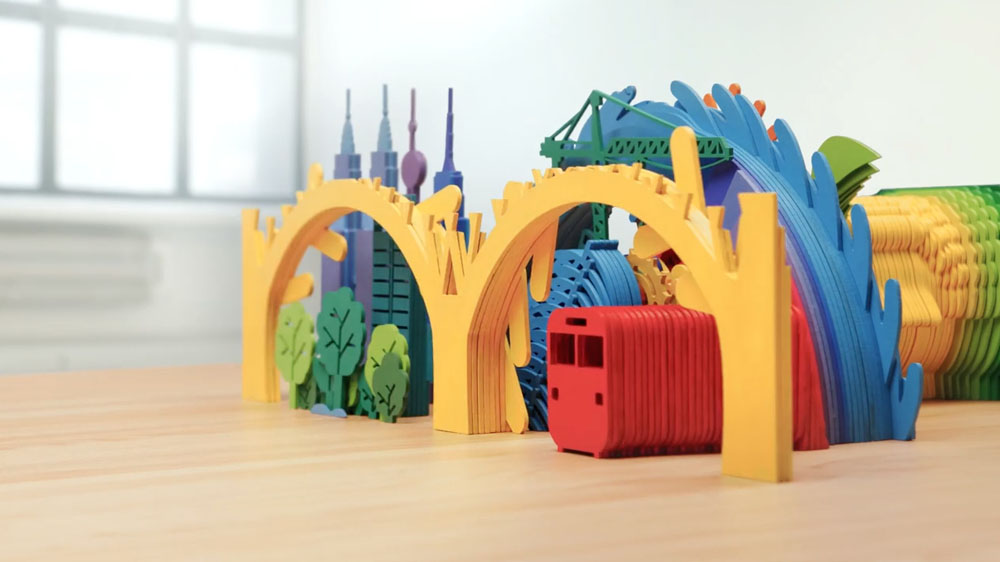 ‘Degree’ uses thousands of paper shapes to create a morphing effect, demonstrating the diversity of the university’s students around the world, the positive impact that attaining a degree from Curtin can have on their life and how “awesome awaits” its graduates.

“They wanted to create a piece that represents awesomeness,” enthused the directors.

Bryan Dennis, Head of Art at Marketforce explained, “We saw Kijek/Adamski’s work for Kitachi and loved what they did, so took the punt and asked if they wanted to bring their expertise to our idea and script. We wanted the end result to be an authentic work of art, made by hand, not computer generated.”

Despite employing a similar animation technique to that used in Katachi, the directors used different materials to achieve it – notably laser-cut paper shapes instead of plastic ones, each one hand-painted in a lengthy painstaking process.

“We wanted to keep the texture of the silhouettes, showing the handmade material as an important human touch in the general technical smartness,” explained the duo.

Kijek / Adamski shot the film in their native Warsaw. With the client and agency in Australia and production run by Strange Beast in London, the project was a global collaboration.

“The production was so smooth. We proved that there are no boundaries anymore,” said the directors, who pointed to their favourite parts of the film: “We like the moments where the installation turns into a rhythmic, abstract piece. It’s almost hypnotising.”

The TVC kicks off the important school leaver recruitment period for Curtin University.

“This is a critical period for us, for all universities”, explained Ty Hayes, Chief Marketing Officer. “We have noticed a trend towards homogenisation of university advertising. We are all out there saying similar things in a similar way to similar audiences. We put the challenge to Marketforce to break the mould, stand out and be noticed. I think they clearly delivered on that brief – the final result is bold, innovative and aligns perfectly with the Curtin brand.”

As an additional element to the campaign, Marketforce, OMD, and Curtin, have incorporated Shazam into their strategy, using the audio search engine to direct viewers to key Curtin video content, the recruitment landing page, and Curtin’s social media assets.

In doing so, Curtin have become the first WA-only advertiser to incorporate Shazam into their advertising. They are also fortunate enough to be the first advertiser globally to use Shazam’s new tag results page format.

“This was a real labour of love for all involved,” said Brendon Lewis, Group Account Director at Marketforce. “Stop frame animation is a long, arduous process and requires a full commitment from all involved to get the best result. As our first major TV work for Curtin, we’re really proud of the result and excited by where the Awesome Awaits platform can take the Curtin brand.