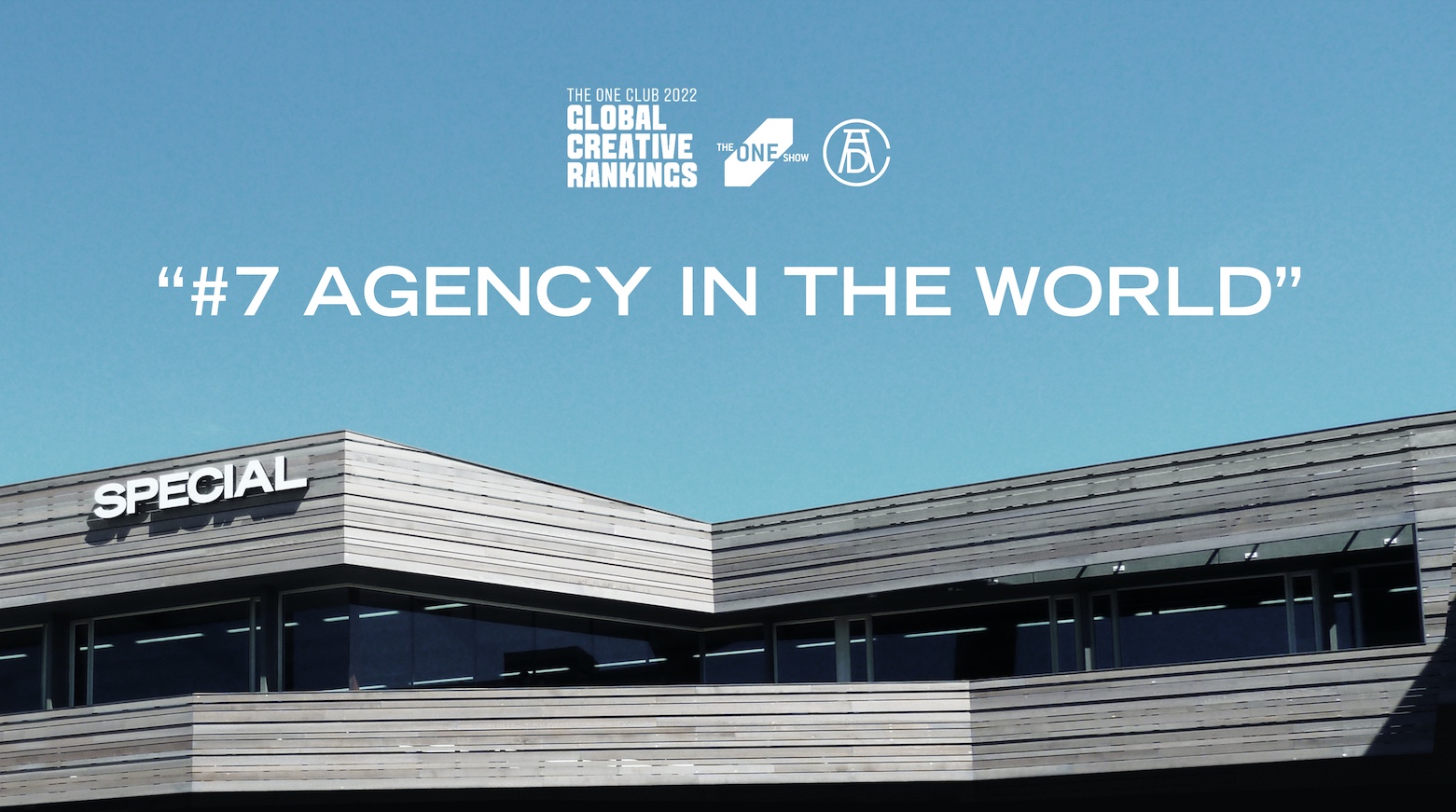 Special New Zealand has again been ranked as one of the very best agencies in the world, this time #7 Agency in the World by The One Club of Creativity Global Creative Rankings, the only agency from New Zealand or Australia ranked in the World’s Top 50.

It’s also the highest ever ranking achieved by any agency from New Zealand or Australia.

Says Tony Bradbourne, founder, Special: “The competition is obviously the toughest you can possibly get, so it’s a great moment to see an agency from our side of the world ranked in the world’s top 10. We’ll take it, put our heads down and try and do it all again this year.

“A massive heartfelt thanks goes out to all of the clients we get to work with every day, your ambition for great work creates results like this, and also to everyone at Special who are driven to make work that truly lives up to our name.”

The Global Rankings provides a cumulative list of companies and individuals based on points earned from their winning entries in The One Show, ADC, TDC, ONE Asia.

Leo Burnett Chicago maintained its top spot in the Global Creative Rankings 2022, which incorporates results from all of The One Club for Creativity’s leading global, regional and local awards shows.

Special’s campaign for Motor Neurone Disease Association of New Zealand ‘David’s Unusables’ was named ‘#4 Most Awarded Campaign’ in the rankings, ahead of ‘The Unfiltered History Tour’ at #5. ‘The Lost Class’ was ranked #1.

Says Bradbourne: “Every bit of awareness ‘David’s Unusables’ generates helps grow awareness of this little understood disease. So it’s incredible to see it ranked as one of the 5 best campaigns in the world last year, alongside some of our other favourite campaigns from around the world. It was a real labour of love for so many at Special.”

Says Kevin Swanepoel, CEO, The One Club for Creativity: “This 2022 Global Creative Ranking is truly comprehensive, for the first time encompassing more global, regional and local awards competitions than any other source. As the industry’s foremost global nonprofit organization for the creative community, The One Club is in a unique position to provide this definitive measure for global creative excellence.”

Highlights of the combined Global Creative Rankings 2022 are as follows (click link for each category to view the full list).

The Global Creatives Rankings for individuals, who are listed at the agencies where they worked when the winning entries were produced, are as follows.

Typographer of the Year: Eve Steben, This Is Studio London