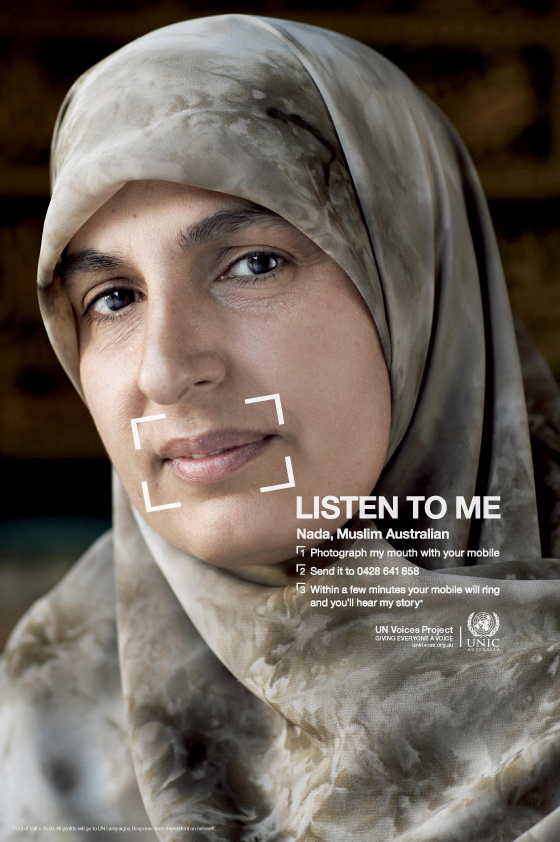 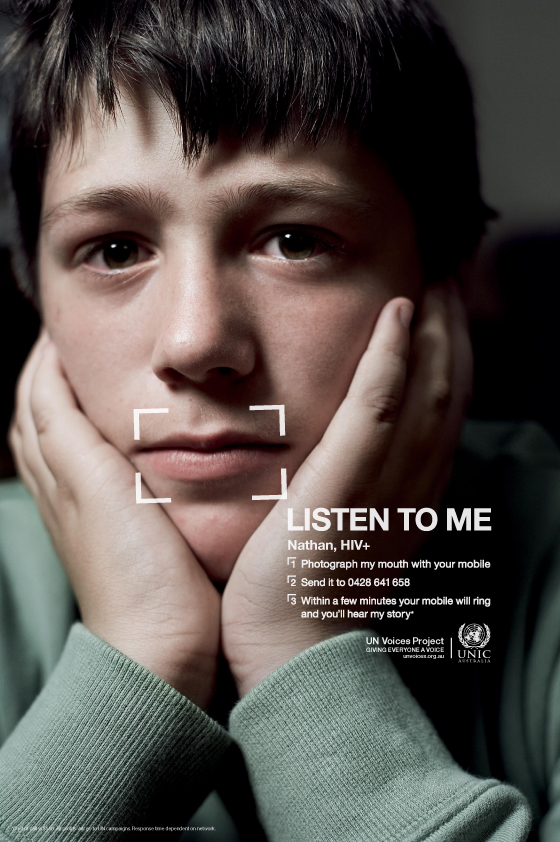 Saatchi & Saatchi Australia this week unveils a groundbreaking campaign for pro bono client United Nations called ‘The UN Voices Project’ in which you can actually listen to an outdoor poster and press advertisement via mobile phone technology for what the agency claims is the first time. See the campaign

Using an innovative new digital channel to connect and engage the public, the campaign features outdoor posters, print and online elements. These are combined to reinforce the message of giving a voice to those whose plight normally goes unseen and unheard.

People around Sydney are encouraged to take a mobile phone photo of the featured person’s mouth and send it to a number on the poster as a text message. Then using digital image recognition technology and an Australian first call back service, the sender receives a return phone call with a pre-recorded message from the person they have photographed, giving a brief insight into how they live and highlighting some of the issues they face. The message then directs people to a UN website where visitors can leave their own comments and thoughts, turning the original seven voices into thousands.

Says Saatchi & Saatchi CEO Simone Bartley: “The voices of this campaign tell an Australian story that is completely outside the experience of most people. It’s easy to tune out, to ignore the fact that many Australians face a life in which they suffer abuse, poverty or neglect. By creating new and exciting ways for our consumers to engage and interact with brands we’re able to ensure we remain at the forefront of creativity and effectiveness. This campaign has allowed us to do both for a great cause.”

The campaign appears to be relatively simple in execution, yet is deceptively powerful and moving in its impact. Seven different posters have been set up around various sites in Sydney featuring people with a story to tell. These posters feature; Loula (a domestic violence survivor), Foday (a Refugee from Western Africa), Shannon (Aboriginal youth worker and activist), Nathan (a 13 year old born with HIV), Tony (a homeless man), Nada (a Muslim Australian) and Uncle Max (an Aboriginal Elder).

Conceived as a UN brand campaign, it is the first to combine several of the UN’s many causes and charities. It will initially be concentrated in the Sydney CBD with the option to expand throughout Australia and potentially worldwide, utilising Saatchi & Saatchi and the UN’s global relationship.

Says Paul Worboys, Saatchi & Saatchi’s Head of Digital and Direct: “Technology for technology sake is just not relevant today – however, using innovative technology that extends an idea to make it connect at a deeper level with a consumer, is.  And this UN Voices campaign is a great example of this in action.”

All pro bono media space has been organised by Zenithoptimedia.

Thanks to Gusto Music from Melbourne as well