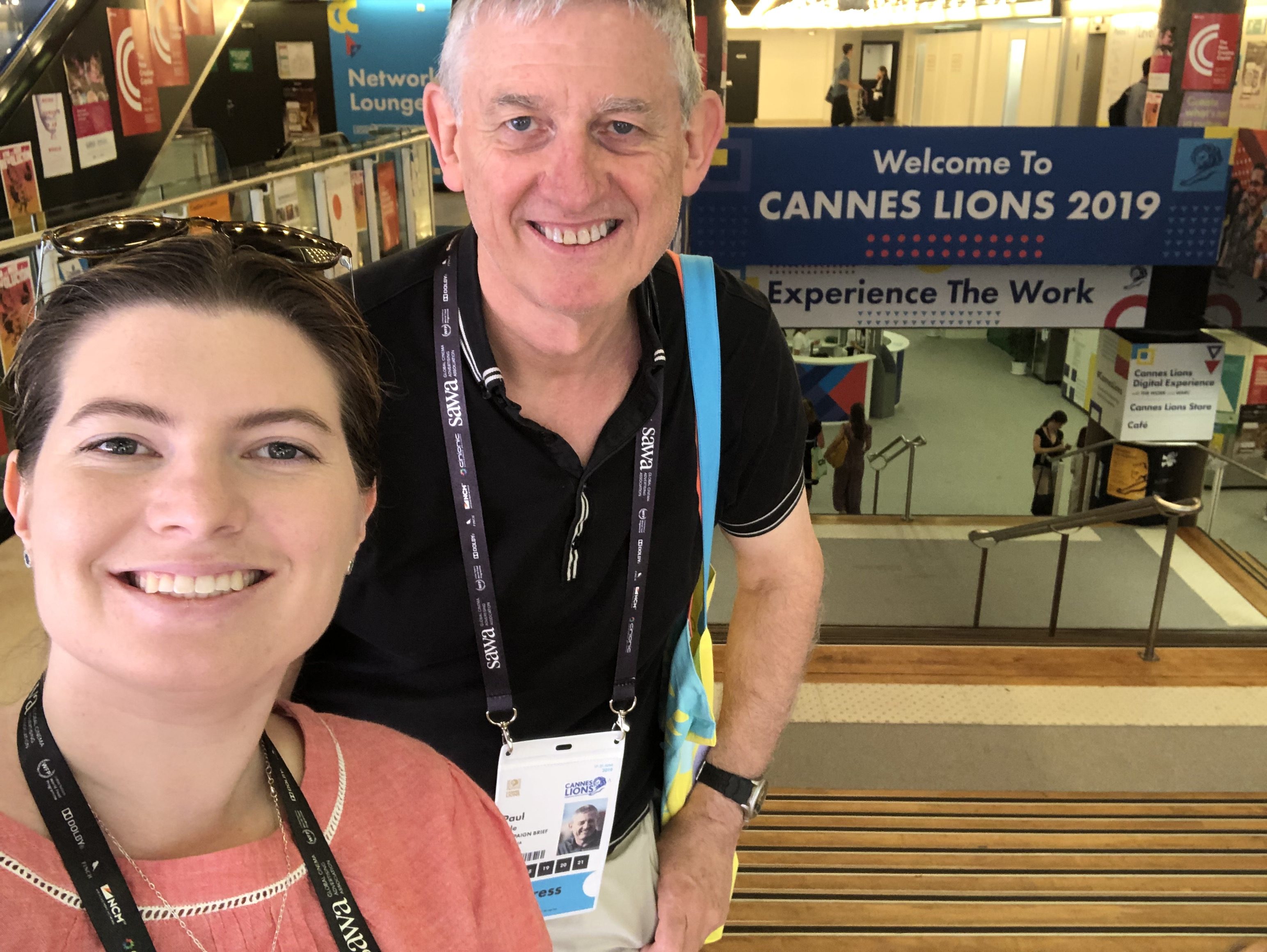 Paul Yole has been reporting for Campaign Brief from Cannes since 2007. An industry veteran of over 40 years (latterly at The Brand Agency), this year Paul is joined by his daughter Emma, who is just entering the industry. Each day they will be giving their very different perspectives on the best sessions of the week. You can also follow Emma’s Cannes Instagram story @emmacyole.

First, there is this appalling visual pollution at the iconic Carlton Hotel.

Somebody, please pay these guys not to advertise. 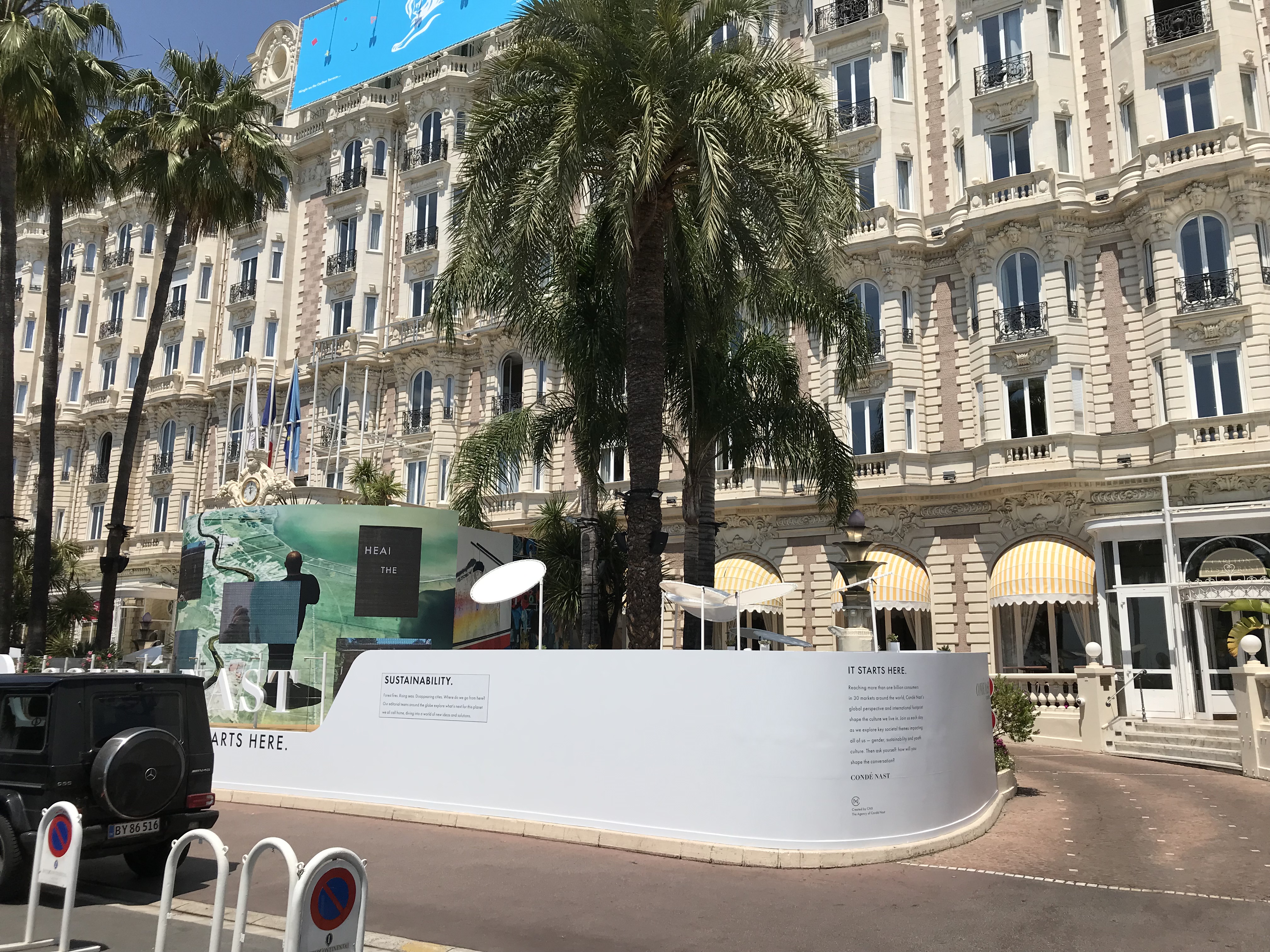 I’m also getting fed up hearing the same old drivel about the changing environment for ad agencies.

For crying out loud, stop it. And do something.

Here is the harsh truth, and a possible solution, supported by Forrester Research and presented today by Jay Pallistall. You can download the report here.

Forrester forecasts that ad tech will grow at 9-11% between today and 2022.

Agency growth? A mere 2.4%. Barely the rate of inflation.

Just when we need creativity the most, business leaders are investing in it LEAST.

Pallistall talked a lot about how customer experiences have stagnated and become homogenised.

Pallistall suggested bringing creativity, data, tech and media back together and I think he may have a point. Put creative solutions at the heart of everything you do. Invest in training for data and creativity.

But here is the killer blow.

Forrester forecasts that if brands shifted $19 billion from tech to creativity over the next six years it would generate an extra $10 billion ROI.

So what are we waiting for?

Emma: This morning I undertook a marathon in the Lumière Theatre: three talks in a row, starting bright and early at 10am. This early start meant the first talk wasn’t very full, which was very disappointing as I think the content was some of the most vital information delegates needed to hear.

The session featured Sir John Hegarty and Terry Savage, and directors of the World Food Programme Corinne Fleischer and David M. Beasley. When I walked into the theatre, I was greeted by confronting images of children in warn-torn Syria accompanied by the sounds of helicopters, bombs and gun shots. This set the mood for the following 45 minutes, which discussed the global hunger crisis and how the cinema medium can help stop the problem. Once again, millennials were mentioned; they are the generation that cares and who can be reached in large numbers by the cinema.

The main takeaway was that hunger feeds terrorism. The more hunger increases, the more migration increases, and the more refugees are forced into terrorist regimes as a way of feeding their family. We previewed a deeply moving spot by Hegarty’s The Garage, which highlighted how influential cinematic techniques can be.

Paul: My mood was brightened by my favourite session every year, the Future Lions, sponsored by AKQA and VSCO.

Student teams are given the same brief every year, “Connect an audience of your choosing to a product or service from a global brand in a way that wasn’t possible three years ago”.

Encouragingly virtually every one of the 1,000 entries from 71 countries created ideas for social good, even though it was not specified in the brief.

The winners’ ideas are extraordinary.

McDonalds McFive, which uses touchscreen tech to improve hygiene for self-serve orders. Apple Epilepsy, an app which guides strangers to help someone having a fit. And Vodafone UR Voice, which replaces those awful electronic voice boxes for throat cancer sufferers with their real voices.  The future is in good hands. Maybe us oldies need to move aside.

Emma: My first session with Hegarty was followed by ‘Art and Activism’, featuring acclaimed director Alfonso Cuarón amongst others. We gained a glimpse into the work that Participant does to act as the connective tissue between art and activism, which was shown through Cuarón’s film ‘Roma’ that enabled huge changes in US and Mexico domestic workers rights.

After these two talks, I felt inspired and excited at how my future career in advertising might be able to help those in need.

Unfortunately, the third talk I watched felt a little bit underwhelming and commercial in comparison. This talk had enormous lines to get in, and the Lumière Theatre filled up in a matter of minutes. The anticipation was huge. The talk featured David Droga and Accenture’s Brian Whipple. 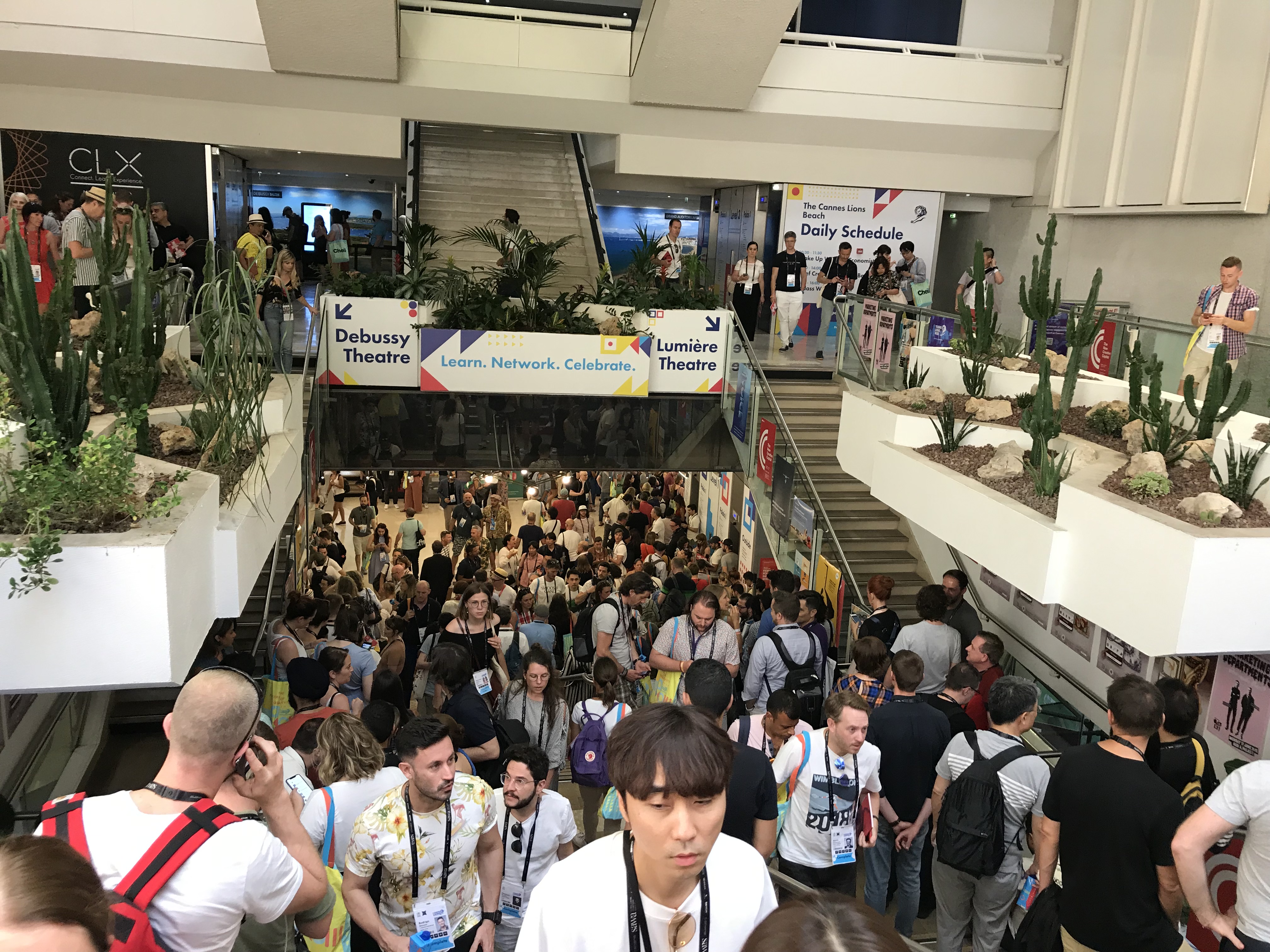 I had high expectations, as I know Droga is an absolute legend and has created amazing work. However, after hearing two hours of talk on the global hunger crisis, terrorism and domestic workers barely being able to look after their family due to poverty wages, I really wasn’t interested in hearing about one massive company buying out a huge ad agency for a lot of money.

It all felt very insignificant in the scheme of things, so I left.

As a fresh face in the industry, I want to go to talks that are going to inspire me to do good work and give me ideas to feed my creative juices. The topic of this five-star rated talk therefore disappointed me.

Before I sign off, I’d like to quickly mention the Creative Women session I attended at the end of yesterday. It was an intimate affair, and I was pleased to find that it wasn’t a typical feminist talk about ‘women can do anything they want’. It was just five people telling stories of triumph that proved anything is possible when you put your mind to it. Gabriela Lungu was an engaging and passionate host, and I wish more sessions engaged with the audience as closely as this one.

Paul: Meanwhile, in the Press Centre I saw a demo of a brilliant invention using robotics to provide companionship for the elderly.

Very cute. Here is a little video I took. 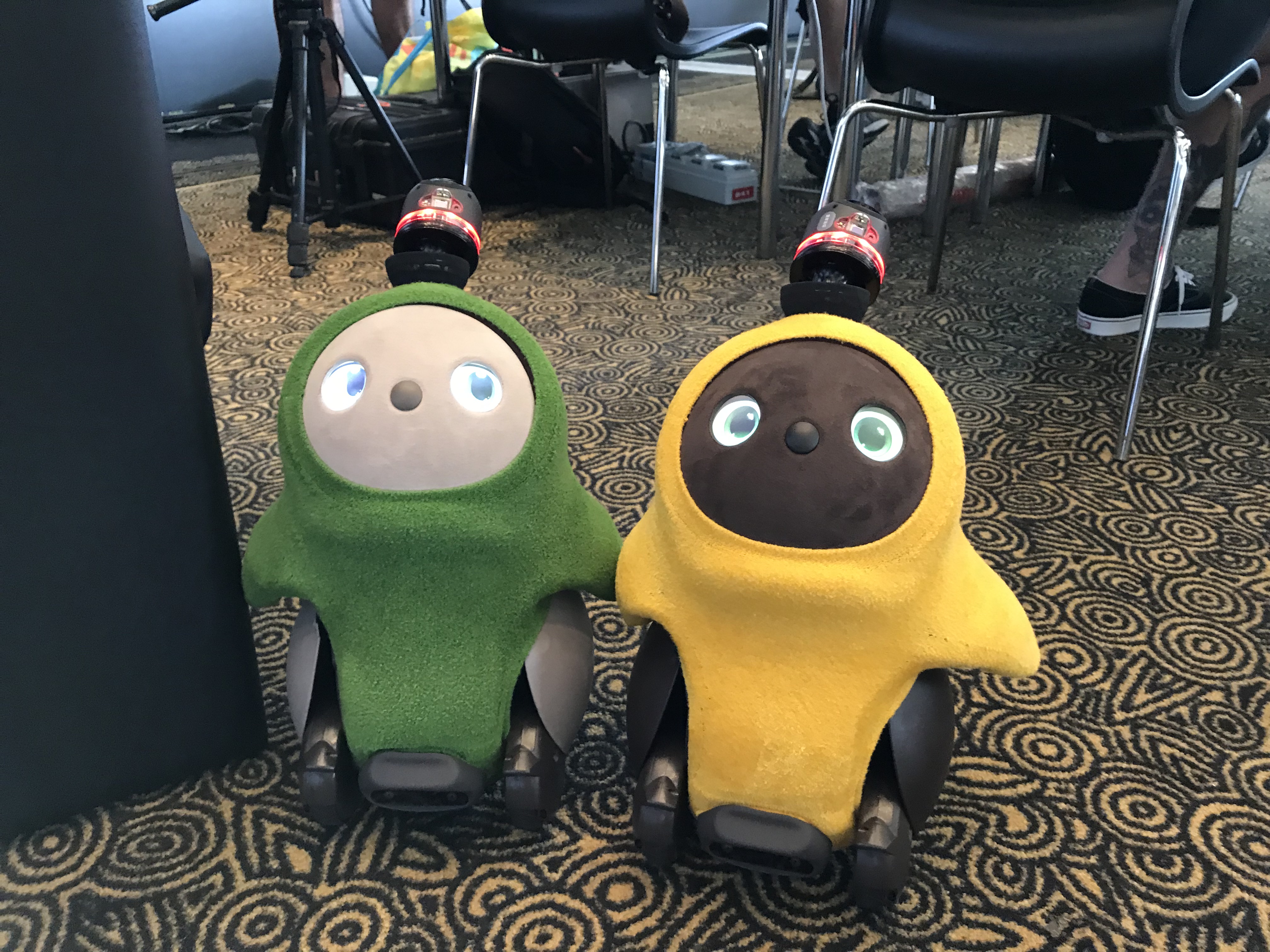 Emma: By the way, I’m posting lots on my Instagram story which can be found @emmacyole. I think Instagram is the way forward and Twitter will die out, because most of my generation don’t bother with tweeting. So, please check out my account!