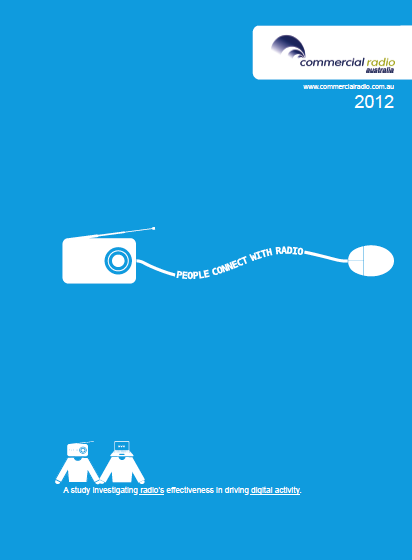 People are six times more likely to go to an advertiser’s website if they have heard their advertisement on radio, according to latest research by Colmar Brunton, and released today by Commercial Radio Australia.

The research shows that radio advertising has an immediate effect on people’s digital activity, with over three quarters of respondents or 78% of those exposed to advertising, visiting a website or Facebook page or searching for the brand online, within 24 hours.

Says Warner: “This research clearly identifies how well radio and digital media work together in building brand awareness and stimulating digital activity.The results are very strong – people who have heard a radio commercial are significantly more likely to visit a website or browse for information on a brand or search a category. Advertisers who know that the vast majority of Australians are online and accessing the internet daily, can now be certain that people respond strongly to a radio driven campaign.” 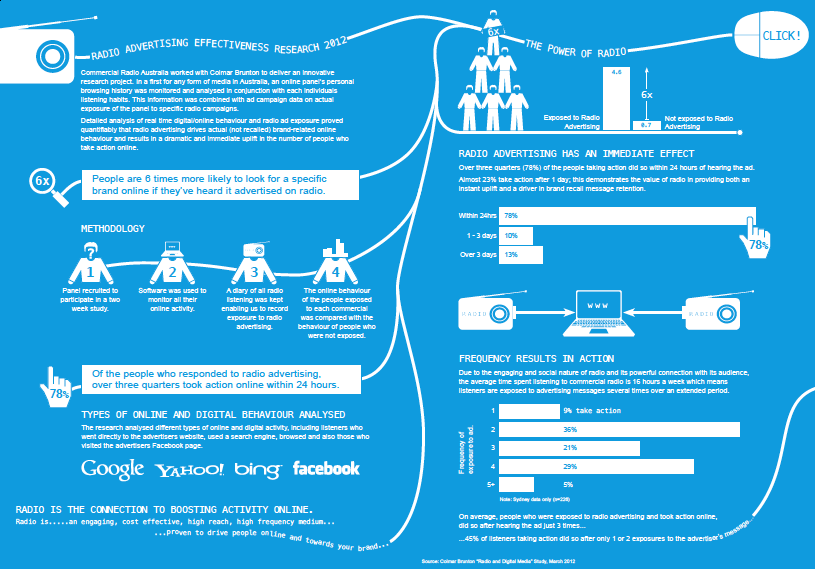 The findings of the research will be used as the basis for the industry’s new ad campaign, which starts nationally on June 4.

The ads, written by Eardrum Australia, are part of the ongoing multi-million dollar brand campaign which promotes the strengths of radio, and has been running since June 2003.

The main findings of the independent research, commissioned by Commercial Radio Australia, are:

– people are, on average, six times more likely to visit a brand’s website if they hear a radio ad with a digital call to action, than those not exposed to the radio ad

– radio advertising has an immediate effect. Over three quarters (78%) of those who heard the ads took some form of digital activity within 24 hours 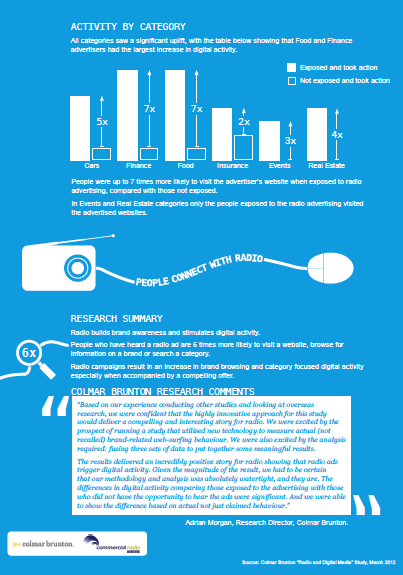 The results were consistent across sectors and showed even greater uplift in digital activity for the food, finance, government and motor vehicle categories.

Warner said the research, an Australian-first, was commissioned to look at the direct link between exposure to radio advertising and the online response and digital behaviour it triggers.

She added: “This is a unique research study into how radio influences digital behaviour. There were around 500 participants in the study who recorded their listening habits via diaries.  This information was then compared directly with specific station ad campaign data, as well as each individual’s browser behaviour and history, which allowed us to quantify the ability of radio ads to drive actual, not recalled, digital behaviour.”

Says Steve Nuttall, managing director of Colmar Brunton Sydney: “This is ground-breaking research. It is the first study in Australia to establish the direct link between media exposure – in this case commercial radio advertising, and the online response it triggers.”

Warner said the industry continues to promote the benefits of radio to advertisers.

She concluded: “In a tough trading environment, it is crucial our medium is top of mind with all advertisers. In addition to this exciting research, the industry has also recently launched a website, called “Radio Connects“, which provides access to a range of successful advertising case studies, showing how radio has been used best in actual campaigns. We are hopeful this website will become an invaluable resource for advertisers and media buyers alike, as it shows real solutions and highlights the benefits of advertising on radio,”

The Colmar Brunton research and new radio ads have  been presented to agencies, media buyers and stations nationally over the past two week finishing with a briefing this morning in Sydney