Today, proud Yuin artist, producer and radio host, Nooky has revealed his First Nations social enterprise, We Are Warriors (WAW) will host ‘Blak Powerhouse’ for one night only from Sydney’s Powerhouse Museum on Invasion Day (January 26, 2023).

On one of the year’s most polarising dates in Australia, We Are Warriors invites all ages and backgrounds to a free evening of live music, contemporary and traditional dance, film, art and panel discussions, as Blak Powerhouse turns a day known for great loss and sorrow into one of power and positivity from an inclusive space. Over 18 months in the making, Nooky partnered with creative agency R/GA to design a first of its kind business model and brand with We Are Warriors, which launched on January 26, 2022. Together the groups will work to inspire a new generation of warriors for this special one-off event.

Highlighting the evening’s program are live performances from We Are Warriors ambassadors Barkaa, Kobie Dee and Nooky, plus fellow artists Kanada The Loop, Mi-kaisha, and more to be revealed. Additionally, visual artist DeadFace will practice live art, alongside walk-through exhibitions from contemporary artist Charlotte Allingham (aka Coffin Birth) and photographer Luke Currie-Richardson, celebrating Blak Power. Nooky himself will deliver a Keynote address adjoining a panel discussion centered on themes of representation, identity and building a Blak future that all are proud of. There will be dances from Muggera and Doonooch, tastemaker tunes courtesy of Latifa Tee, as well as the world premiere of new documentary film, “Through The Fire”, a documentary by We Are Warriors, R/GA and Entropico, followed by a panel talk with Nooky, producer Kieran Satour and cinematographer Tyson Perkins.

On Blak Powerhouse, Nooky says: “Blak Powerhouse is another mark in the We Are Warriors song line. January 26 is a day that doesn’t usually give me good emotions or feelings. My people mourn the atrocities that ensued on and after January 26, 1788. We celebrate our survival on the day, while others celebrate… you ask em. I bet half of em couldn’t tell you. Launching WAW on January 26 and now creating the Blak Powerhouse on our 1st birthday really has changed what this day means to me personally, and hopefully we can do that for others as well. For me it has a new name up there with Invasion Day and Survival Day – now WAW day is in the mix.”

Acknowledging that you can’t be what you can’t see and informed by Nooky’s own upbringing as a self-proclaimed warrior, We Are Warriors is an all-encompassing cultural movement and platform dedicated to inspiring, equipping and empowering Indigenous youth to succeed by connecting them with First Nations role models.

Says Ben Miles, VP, executive creative director, brand design and consulting APAC at R/GA: “It’s hard to be what you can’t see. So, on a day that’s so polarising, we wanted to take control of the narrative and put a spotlight on Blak excellence. We reached out to the Powerhouse Museum with a brave idea of transforming it into the House of Blak Power. And on Invasion Day it will be renamed the Blak Powerhouse. It’s a bold move and an invitation to come together and be part of a Blak Future.”

Since launching We Are Warriors one year ago, Nooky and creative agency R/GA have shared a collective goal to operate a platform that celebrates Blak excellence and empowers the next generation to achieve their greatness, and see themselves as warriors. We Are Warriors launched with a content series of video interviews, followed by a feature presentation at Semi Permanent in May, and WAW Fest in June, which saw Nooky assemble an all-star cast of artists including Dallas Woods, Kobie Dee, Triple One for a musical showcase as part of VIVID Sydney. These events all maintain an overarching roadmap to build empathy among everyday Australians.

Celebrating its one-year anniversary in 2023, We Are Warriors is a co-created, purpose-driven company dedicated to celebrating the far-reaching potential of Blak excellence and connection to role models in shaping the futures of First Nations youth. Next, The House of Blak Power looks to embrace and support the transition of what was once a day of sorrow into one of positivity, shaping fundamental change for the Indigenous Australian community.

Join us for a night of Blak Power, as some of today’s contemporary warriors inspire the next generation to achieve anything at Sydney’s Powerhouse Museum. 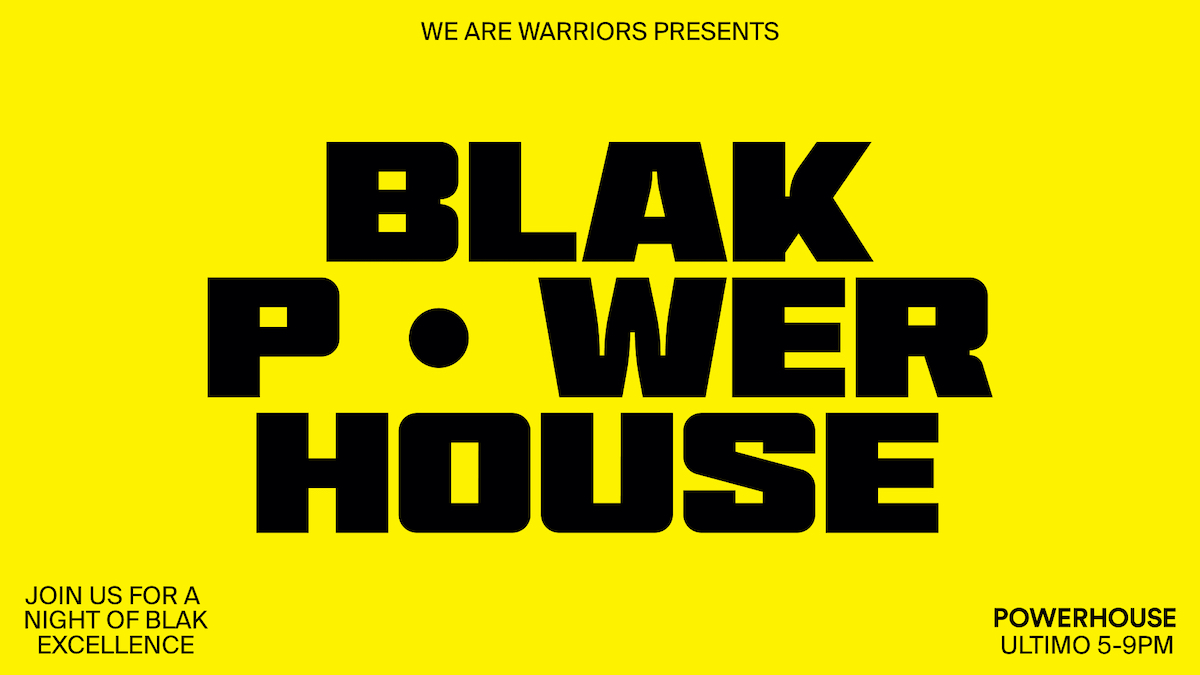