‘Back it up’ is this year’s take on Queensland Fire and Emergency Services (QFES) ‘If It’s Flooded Forget It’ campaign from GrowthOps. It highlights the psychology behind the reasons why people might make a bad decision and drive through floodwater.

‘If It’s Flooded Forget It’ is QFES’ annual campaign to stop people from driving through floodwaters. Too many Queenslanders are still risking their lives, and the lives of others, with 37 per cent backing themselves to drive through floodwater.

Says Caroline Starecky, head of strategy and innovation, GrowthOps Brisbane: “Social and environmental pressures, past experiences and overestimating one’s driving abilities or car’s capabilities, are all decision-making factors that can overwhelm drivers into making the wrong choice under pressure.

“We’re asking drivers when they’re faced with floodwater, to mentally and physically ‘Back It Up’.”

The TVC passes through a line of vehicles stopped by floodwater in one smooth continuous shot. Inside each car, viewers experience four very different scenarios, represented by the cohorts more likely to drive through floodwater – a nervous new driver, young males, a distracted mother and a 4WD owner – reducing the likelihood of these audiences self-exempting themselves from the message.

The glimpses inside each car, juxtaposed by outside sequences of driving rain, captures the fear, pressure, bravado and decision-making process behind the decision to drive through floodwater or not.

Says Lindsay Thompson, creative director, GrowthOps Brisbane: “As a safety message, convincing people not to drive through floodwater is notoriously difficult to do simply, and in a relatable, memorable way. Together, we’ve created a quality campaign we’re all very proud of.”

QFES’ campaign coordinator Jennifer Kerr added the production delivered the campaign message in a way that would stay with viewers.

Says Kerr: “The idea, complemented by the cinematic execution, will be hard for drivers to ignore. It is empathic to the reasons why people may get carried away when faced with floodwater, but ultimately promotes the decision to ‘Back It Up’ as being the bravest and smartest thing to do.

“Our hope is that the decision to ‘Back It Up’ becomes second nature, so that in the event of a flood, drivers immediately know what to do and also that their actions positively influence others to do the same.”

The integrated ‘Back It Up’ campaign features above and below the line media, including a TVC screening on commercial television, YouTube, Facebook, and cinemas and other venues throughout the summer, in addition to radio and various Out of Home executions. 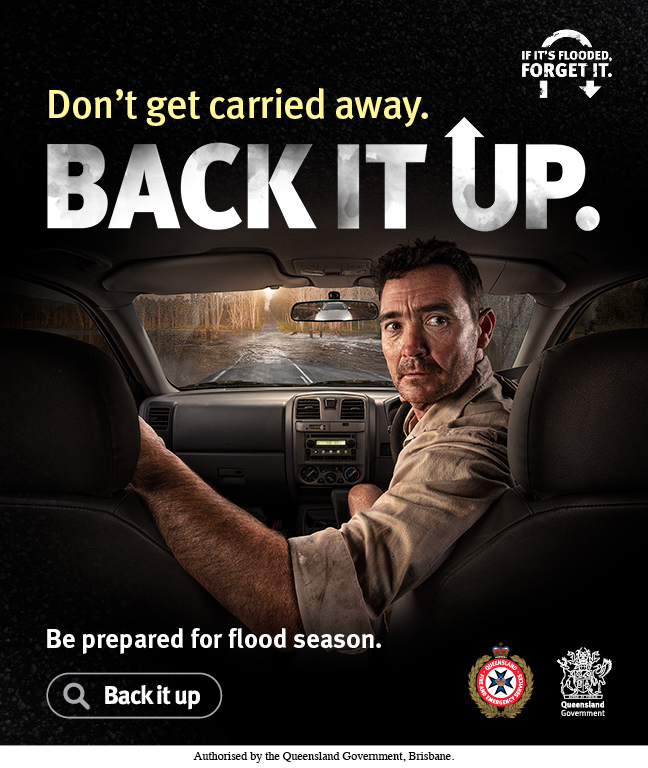