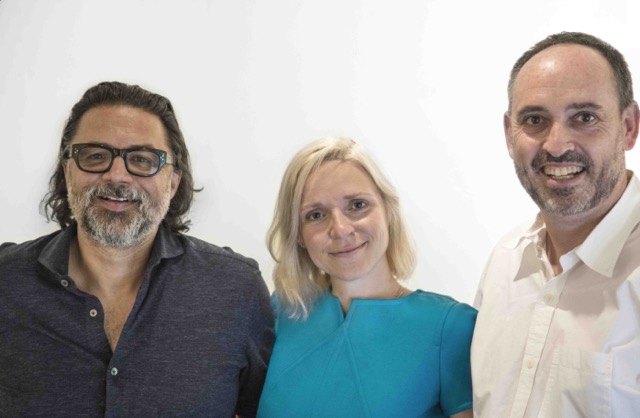 CB can reveal that Publicis Worldwide is launching its creative hotshop, Marcel, in Australia and the new business will be led by David Nobay (far left) as founder and creative chairman.

After a short hiatus from the industry, Nobay will lead the new Marcel agency when it officially launches in early January and will join the Publicis Worldwide Global Creative Board. He will also take up the newly created role of creative chairman of Publicis Worldwide Australia, working closely with CEO Andrew Baxter (above, right) and Iona Macgregor (centre), chief strategy officer. Macgregor, who joined Publicis Australia less than a year ago, was previously managing director and head of strategy at Marcel’s flagship office in Paris.

Marcel, a creative hot shop born out of digital, attributes its name to Marcel Bleustein-Blanchet, the original founder of Publicis. A creative award-winning agency, Marcel has a very strong digital DNA and is specialist at connecting brands with today’s culture.

More than a traditional agency network, the Marcel group of agencies in Paris, New York, Shanghai, São Paulo and now Sydney share the same culture and work as one team across the globe flowing into resources in a seamless way. Globally, it was one of the most awarded French agency in Cannes in 2015 and recently created one of the most famous and awarded cases: Inglorious Fruits & Vegetables, for Intermarché.

Marcel Sydney will launch with a major foundation client; Heineken-owned Tiger Beer, with the new agency acting as Tiger’s lead agency globally. Marcel will be based within Publicis Worldwide’s Sydney offices in Millers Point. It will be Marcel’s fifth office worldwide.

Nobay (widely known as “Nobby”) has enjoyed a 28-year career that has seen him win over 40 Cannes Lions and put him in the executive creative director’s seat in London, New York, Hong Kong, Melbourne and, since 2002, Sydney, where he led Saatchi & Saatchi to be crowned “Australian Agency of the Decade” before he was asked by David Droga to launch Droga5 Sydney eight years ago.

Says Arthur Sadoun, global CEO of Publicis Worldwide: “Marcel is a truly unique offer, a creative hotshop that puts the best of digital at the service of great ideas for the benefit of our clients. Nobby’s talent and experience make him the perfect person to lead Marcel Sydney in this exciting new step.”

Says Baxter: “We’ve been considering the idea of launching Marcel in this market for some time, but had been waiting to find the right leader. When Nobby became available, it was a no-brainer.”

Says Nobay: “When Droga5 closed its doors here, I had two options: either lay back and take a breather or get straight back in the game. A single call from Paris made my decision a simple one. Marcel is special. Anne de Maupeou, Marcel’s creative leader in France is someone I instantly connected with. And the fact that Iona, my strategic partner next year, is a “Marcel original” clinched it. Game on.”

Says Mie Leng Wong, global marketing head, Tiger Beer: “We instinctively feel that our creative journey with Nobby is far from over. We’re delighted to be his founding client and excited by the strategic and creative firepower we can now rely upon across the Marcel global network.”

Marcel Sydney is already close to announcing a number of senior hires as it builds a team to partner with Tiger Beer.