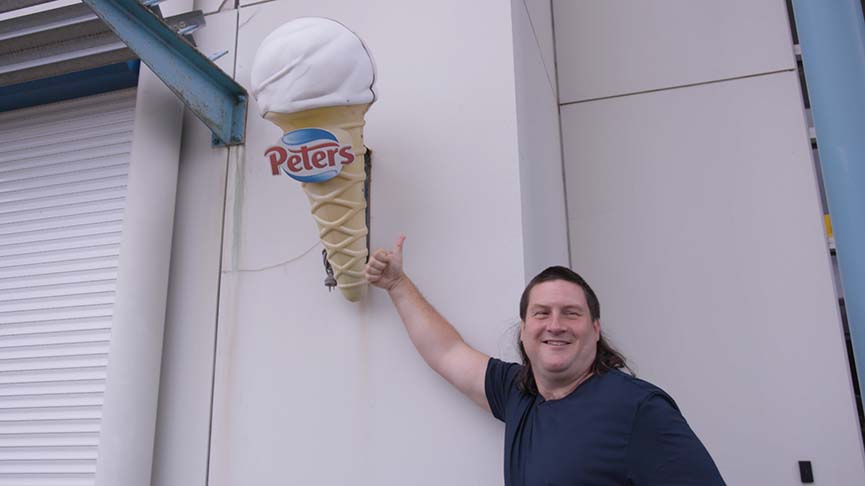 Spark Foundry Melbourne has launched a campaign for Peters’ new Double Handle Maxibon ice cream, partnering with VICE to produce a tongue-in-cheek long-form video starring comedian, Aaron Gocs. Targeted at 16-35 year old male consumers, the campaign has been spearheaded by the seven-and-half minute VICE long-form video, ‘Gocsy’s Australia’. Published on the VICE platform and Facebook page, there will also be cut down versions of the film across Maxibon’s social channels.

Double Handle Maxibon, a new product extension for the popular Maxibon ice cream brand, was created following hundreds of requests by consumers for a Maxibon variant with a biscuit at both ends.

Spark Foundry’s Melbourne Digital Director, Tom Heddon, said: “We decided to partner with VICE and comedian Aaron Gocs, who’s a hero to this community – and also a massive Maxibon lover – to launch the product as part of the series, ‘Gocsy’s Australia’. In the series, Aaron visits the everyday heroes who toil away in factories and on production lines to produce Aussie snack favourites such as Maxibon.

“VICE’s tongue-in-cheek documentary style was the perfect launch vehicle to show the real people behind the new Double Handle Maxibon.”

Other elements of the campaign will include a 60-second version of the VICE film, which will be released in cinemas in July, a content partnership with The Betoota Advocate, an in-game extension with EA Sports, Tinder ads and OOH media targeted at tradies and university students.

Laura Cetrola, Maxibon Brand Manager added: “Maxibon is a brand that resonates with young Australians and taps into the things they care about, and what’s happening right now in culture. To launch one of the most requested formats from our consumers – the Maxibon Double Handle – there was no better partner than VICE because they are at the cutting edge of youth culture, current events, and technology.

“Our audiences look for storytelling that’s real and relatable. VICE’s authentic style of storytelling will bring the Maxibon Double Handle story to life for our fans – and perhaps end the debate of which side of the Maxibon do consumers eat first!”

Brittany Stella, Account Manager Brand Partnerships at VICE said: “Opportunities like this don’t come around every day, but with Peters’ trust from start to finish, the results are comedy and entertainment gold. The combination of the VICE signature story telling lens, with scripted entertainment, has showcased the story behind an iconic Australian product and brand, and left us all craving Maxibons.”