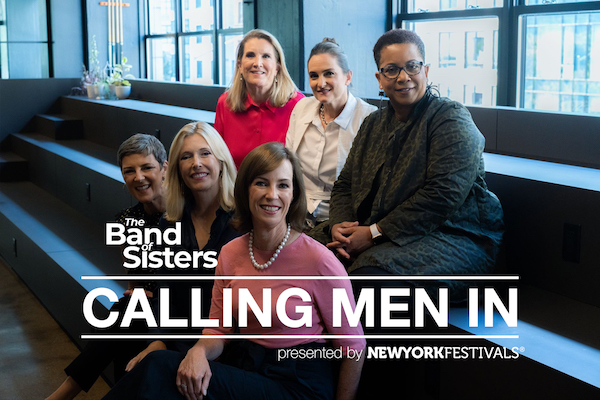 New York Festivals Advertising Awards has partnered with The Band of Sisters,  a group of six executive-level women who have seen it all, from the bottom rung to the boardroom, to create a new series exploring gender bias in the workplace. The result of this creative partnership is a riveting and insight-packed series titled “Calling Men In.”

The new NYF content series explores workplace culture from the viewpoint of six female leaders who met while working at PepsiCo, and who recently formed The Band of Sisters. Founding members Dawn Hudson, Angelique Bellmer Krembs, Katie Lacey, Lori Marcus, Cie Nicholson, and Mitzi Short use their years of experience to bring attention to the micro-moments rooted in gender bias that create barriers to inclusion for women. The six women recently co-authored a book on the topic called “You Should Smile More – How to Dismantle Gender Bias in the Workplace.”

As women who navigated dozens of male-dominated environments, ultimately reaching the C-suite and corporate boardrooms, they know how to create real change. In the “Calling Men In” episodes, they emphasise the importance of engaging a wide audience on this topic, and highlight practical action not only for women, but also for leaders of all genders, and for all witnesses to bias so they can become allies.

The series was inspired by a conversation between Angelique Bellmer Krembs and NYF Advertising Awards executive director Scott Rose following the taping of Carving Stairs into Stone, a content series exploring lessons in leadership, co-created by New York Festivals and Zerotrillion.

Says Rose: “The Band of Sisters are change agents shining the spotlight on gender bias and creating a roadmap towards more inclusive leadership and work culture. We’re thrilled to share their cumulative knowledge and dynamic spirit with our industry in this inspired new content series.”

Says Bellmer Krembs: “When I participated in the Carving Stairs into Stone content with NYF and mentioned our new book, there was a lot of interest to go deeper. We strongly believe gender bias in the workplace is not an issue for women to solve on their own, and we can’t just call men out and expect progress – we need to call men IN to the conversation. That’s when the idea for ‘Calling Men In’ was born.”

The “Calling Men In” series will include conversations between The Band of Sisters founding members and prominent male leaders from top-tier advertising agencies. Guests include Fede Garcia – global chief creative officer at BCW Global, Jason Harris – co-founder and CEO at Mekanism, James Rowe – managing director at adam&eveDDB, Robert Schwartz – chair at TBWA\New York Group, and David Sable – co-founder/partner at DoAble and former global CEO of Y&R, host of New York Festivals Creativity From The Other Side.

The new series officially launched December 22nd. In Episode One, The Band of Sisters join David Sable, host of Creativity From The Other Side, NYF’s flagship content series, to introduce their new book “You Should Smile More”  and offer insights on how women can navigate and advance within the corporate workplace and create a more inclusive culture. Episode Two of “Calling Men In” unites The Band of Sisters as they lead a discussion with four of the industry’s most respected leaders. Together they dialogue about bringing gender awareness into the conversation, creating a corporate culture of true inclusion, and discuss how to collectively accelerate awareness and change. Episode Three continues David Sable’s lively discussion with the “Sisters” as they continue to share the language and tools to advance gender equality.