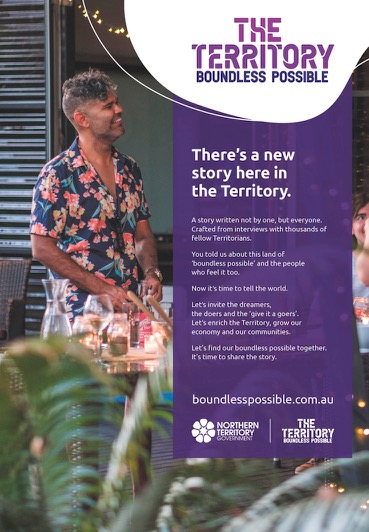 The Northern Territory Government has unveiled a master brand strategy via The Royals, to entice people to invest, do business, live and work in the NT.

A new Northern Territory master brand is challenging outdated perceptions of Australia’s northern-most territory by presenting the reality of the opportunity, ingenuity and lifestyle on offer for those willing to make the move.

Titled “The Territory, Boundless Possible”, the new brand strategy aims to attract investment, business and people to the region by challenging perceptions of the Territory as isolated, tough and lacking in opportunities. The first phase of the rollout encourages local Territorians to hear and tell their story and includes a long-form narrative, logo, short film, press and radio. Phase 2 scheduled for later in the year starts broadcast to audiences outside The Territory. 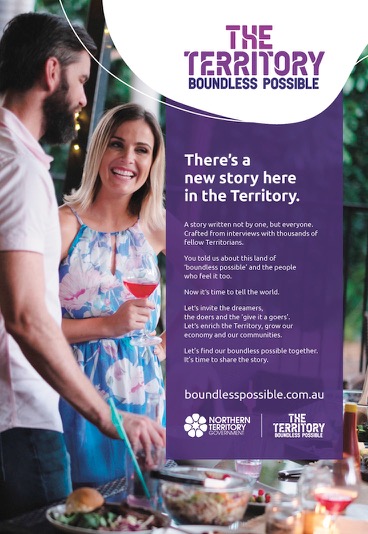 The campaign will target 2.8 million Australians identified by research as being open to living, working and investing in the Territory. Referred to as ‘Committed Opportunists’, this group is aged between 25 and 45, is career-minded, single or with young families and feeling frustrated with life in large capital cities.

Says Andrew Siwka, managing partner, The Royals: “Shifting entrenched perceptions of an entire region is not an easy task and the sort of project The Royals revel in. ‘The Territory, Boundless Possible’ perfectly describes the Territory as a place where anything is possible and we’re confident it will have the desired impact of attracting people, jobs and economic growth to the region over the next two years and beyond.”

Says Michael Gunner, chief minister: “We want to show the world that the Territory is a land of opportunity, but to unlock the full potential of Northern Australia – to create jobs and attract people – we need to put the modern Territory story forward. ‘The Territory, Boundless Possible’ is like no other brand historically used to reposition the Territory. The story behind it is about changing perceptions, not

only in living rooms around Australia, but in the halls of Federal Parliament, in offices, in boardrooms – from Sydney to Singapore.”

The first stage of the campaign has launched in the Northern territory this week. An international launch will take place at the Reaching South to the Territory trade mission in Shenzhen, China later this month, followed by a national launch at the Facing North business mission in Canberra.