The Heart Foundation has today stepped up its fight against heart disease, which kills one Australian every 30 minutes on average, launching a new campaign via Host/Havas urging all of us to get up and walk our way to better health.

The five-week integrated print, digital and broadcast media and marketing campaign, Walk Away From a Killer, is the next instalment in the award-winning partnership between News Corp Australia and the Heart Foundation.

It follows the highly successful Serial Killer campaign in February, which highlighted the fact that heart disease accounts for 51 deaths daily, Australia-wide, a number that’s since dropped to 48. Within a week, the Serial Killer campaign led to tri-partisan support for adding Heart Health Checks to the Medicare Benefits Schedule.

The latest campaign kicked off this morning, with mega wraps across News Corp Australia’s key metro mastheads The Daily Telegraph and Herald Sun as well as full-page advertisements in selected regional mastheads including the NT News and The Gympie Times with another mega-wrap in The Courier-Mail on Thursday. This is to be followed on 17 November by another wrap on Body + Soul magazine in Sunday mastheads, along with sponsored columns in Body + Soul over several weeks.

The campaign is being supported by an editorial series across key metro and regional mastheads, highlighting how walking has enhanced individual lives in different ways.

The Heart Foundation’s chief marketing officer Chris Taylor said walking was a proven way to cut the risk of heart disease, including associated factors such as high blood pressure and being overweight: “Startlingly, only about 50 percent of Aussie adults meet the minimum daily recommended physical activity.”

Taylor said the campaign will build on the Heart Foundation’s support over more than 20 years for Australia’s largest free walking program, Heart Foundation Walking, and its more than 1100 walking groups across Australia, ages and communities: “Our new walking campaign will feature strong, engaging content aimed at building awareness of walking and galvanising Australians to take a stand for their health.

“Heart Foundation Walking is a truly great initiative and as part of this campaign we will be sharing stories of people whose lives have been transformed by walking.”

Taylor said a campaign highlight was the ability for News Corp Australia’s regional mastheads to target campaign advertising in areas where people are most inactive, and therefore at higher risk of heart disease: “Only News Corp Australia can give us this kind of targeted reach.”

News Corp Australia’s chief operating officer, publishing, Damian Eales said the ability to target hyper-local advertising showed the key role local news played in local communities: “Our partnership with the Heart Foundation will include targeting populations where a significant portion of the population is at risk from a disease that’s often preventable, demonstrating how important local media is at the community level.”

Half-page advertisements in News Corp Australia’s metropolitan and regional mastheads on November 4 and 18 will coincide with geotargeting on Instagram and Facebook, digital direct response and search engine marketing campaigns.

People will be encouraged to join a Heart Foundation Walking group and download the Heart Foundation’s walking app. The pace will accelerate November 1-December 10 with the “Put Your Foot Down” step challenge, in which app users will go in the draw to win prizes for every 100,000 steps walked.

Since the Heart Foundation and News Corp Australia’s partnership was launched in February, it has so far achieved:
– The federal government introducing life-saving Heart Health Checks as part of Medicare;
– The Heart Foundation’s online Heart Age Calculator growing from 120,000 users in its first two days to more than 880,000;
– 15 marketing and advertising awards. 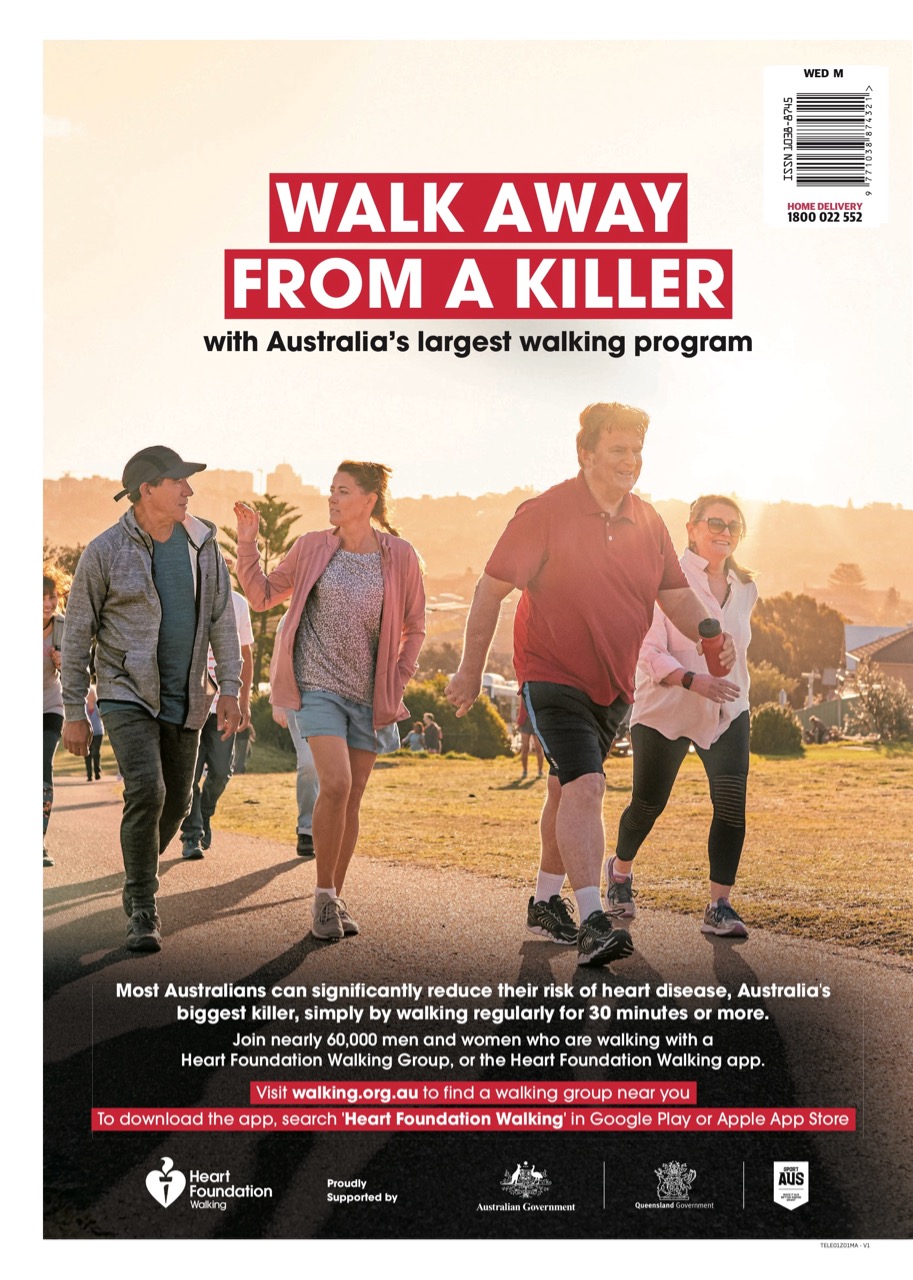 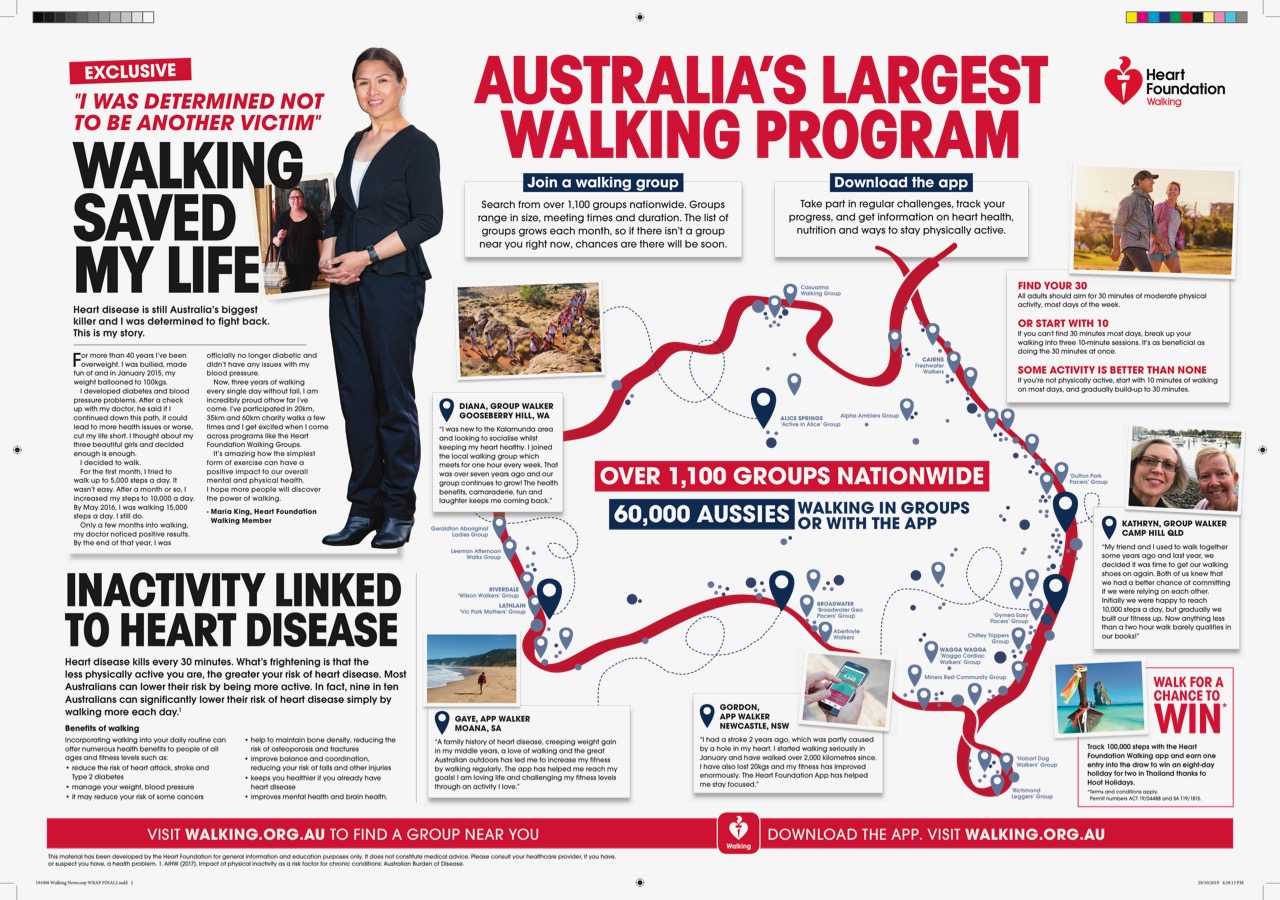