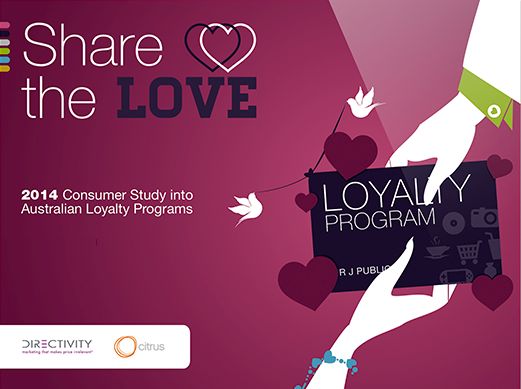 A comprehensive new study into loyalty programs has revealed that most loyalty program members will spend more and shop more often if they can share their rewards with others.

The research also reveals 65 per cent of members want to leave their rewards or points to someone else when they die.

CEO of Directivity Adam Posner says there is a strong opportunity for loyalty marketers to differentiate their programs given not many programs offer this feature.

Says Posner: “Apart from the big programs which offer a community connection or the option to give points to someone else, generally it’s not a big feature of loyalty programs.”

In other key findings, the report also reveals more than a quarter (26 per cent) of members have left a loyalty program in recent years, with speed or earning and redeeming points and unappealing offers the key reasons for defection.

“Loyalty programs are big business and a key touch point for a brand so marketers need to ask themselves: Remove a quarter of your membership and what impact would that have on your brand?”

The study also shows 57 per cent of members prefer a traditional loyalty card over an app.

Says Noble: “There’s a status factor at play here. Pulling out a card especially if it’s status based program like a Black Amex or Myer Gold card is not the same as using an app.”

Noble says marketers should let members choose their program interaction via a traditional card or app given 31 per cent want both.

When it comes to sharing data, the research indicates almost three-quarters of members (73 per cent) are happy to have their buying behaviour monitored in return for personalised offers. But there is a limit, with more than half (52 per cent) not keen to have their personal details shared with other organisations.

Says Noble: “You must have an extremely good reason for requesting some of the more personally identifiable data from members such as mobile number and income.”

Says Posner: “This has implications for big coalition programs. When people join they know their data will be shared with program partners – but 52 per cent are saying they’re uncomfortable with it, even if they get more points or rewards.”

The report can be purchased for $295 at www.theloyaltypoint.com.au.