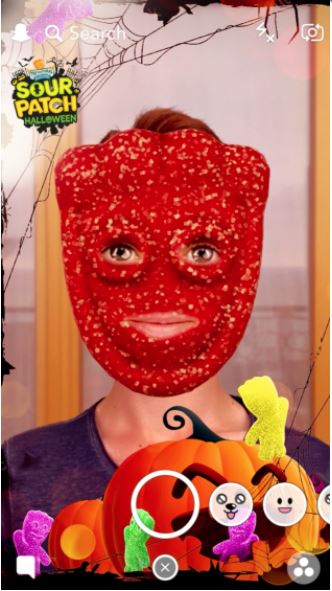 Mondeléz Australia has partnered with Snapchat to launch the platform’s newest functionality – demo- targeted audience lenses, promoting a range of suitably spooky lenses to suit the split personality of their Sour Patch Kids range for Halloween in a campaign created in conjunction with media agency Carat.

To date, Snapchat lenses in Australia have only been available to advertisers for purchase as a nationwide takeover, however campaigns will now be able to be targeted based on a number of key demo factors, significantly improving precision for advertisers.

Qualifying factors include age, gender, and ‘Snap Lifestyle Categories’ – content-informed audience segments based on a user’s viewing habits in Discover and Our Stories.

Mondeléz Australia is the first brand to partner with Snapchat for the local launch of audience lenses, running a targeted lens that switches as easily between sour and sweet as their Sour Patch Kids product promises to.

The lens activation will run in the spookiest week of the year – the lead up to Halloween – targeted at people 14-24yrs.

The launch of the audience lens functionality coincides with reduced lens production times for advertisers, with original lenses now requiring only six weeks, and a quick turnaround option that can be live in under three weeks.