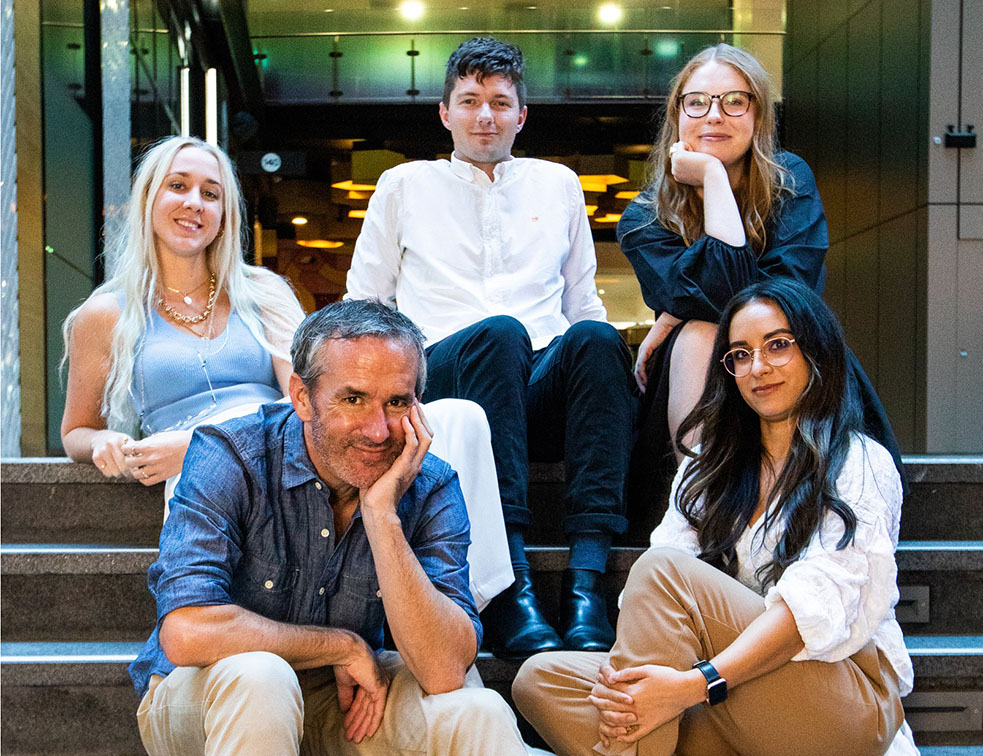 It has been a busy time at Mediahub Perth as the agency continues its media and digital team expansion. In the wake of recent new business success with direct media clients and integrated clients (with sister agency 303 MullenLowe), the full-service media agency has recently made five new hires and a promotion in the team.

As part of his new remit, he will lead the charge in further building out Mediahub’s digital team off the back of recent wins including the Australian Trade and Investment Commission (Austrade) with complex international media campaigns, Australia’s South West (regional tourism organisation), Buyers Buyers and an expanded brief from existing client Mentally Healthy WA and its Act, Belong Commit programme.

In other new roles for the Perth agency, Mediahub has also hired James Porteous (pictured back middle) and Sherridan Fuentes (pictured front right) as Performance Managers. Porteous joins from Seven West Media where he managed digital strategy and execution for clients across the housing, motor, caravanning/outdoor and travel industries. He has a strong digital media pedigree having also worked at Bonfire and Titan Digital.

Sherridan was most recently at The Brand Agency in the role of Media Technologist. Passionate about her work and collaborating with Media Planners and Technologists, she brings experience across government, e-commerce, tourism, charity and gambling clients.

Other new hires include Ariel Bombara (pictured back left) who joins Media Director Sasha Neame’s team as Media Manager following a three-year stint at The Brand Agency. A tenacious, well-rounded media planner, Ariel specialises in social media management and digital communications honed across tourism, utilities, retail, government (health, election), land/real estate and lottery clients. Ben Miller has also taken on the role of Media Coordinator, joining 2021 starter Sam Fisher in a similar role. Both will provide support across a variety of clients and round out the full-service media team.

René Migliore, Mediahub GM and 303 MullenLowe Joint Managing Director, said: “The team here in Perth is already delivering very sophisticated, integrated work across local, national and international clients that we’re immensely proud of. That skill and dedication has seen outstanding new business success in very challenging conditions. With the expanded team we’re adding greater depth of ability, experience and capability in digital and integrated media. Finding the right people has been tricky given the tight market recently, but we’ve managed to attract some absolute stars.”

As part of the ongoing Mediahub Perth evolution, Meg Handley (pictured back right) has also been promoted to Media Manager. Handley has been an invaluable member of the team since joining in 2018, having worked on JWH Group, Royal Life Saving WA, Telethon Kids Institute and more recently the South West Edge tourism campaign. She has rapidly developed her broad media skills in planning and buying, under the leadership of Media Director Kylie Macey.

Migliore concluded: “Off the back of organic growth and some new business success over the last 12 months, it’s a real pleasure to see our media and digital team grow and evolve, with the development of existing team members plus new blood. We’re excited about what’s next for our media and digital team, especially with a great mix of clients that continue to bring our best.”

Mediahub is a full-service media agency delivering integrated media planning and buying at a local, national and international level. It is part of the Attivo Group and sister agency to 303 MullenLowe.