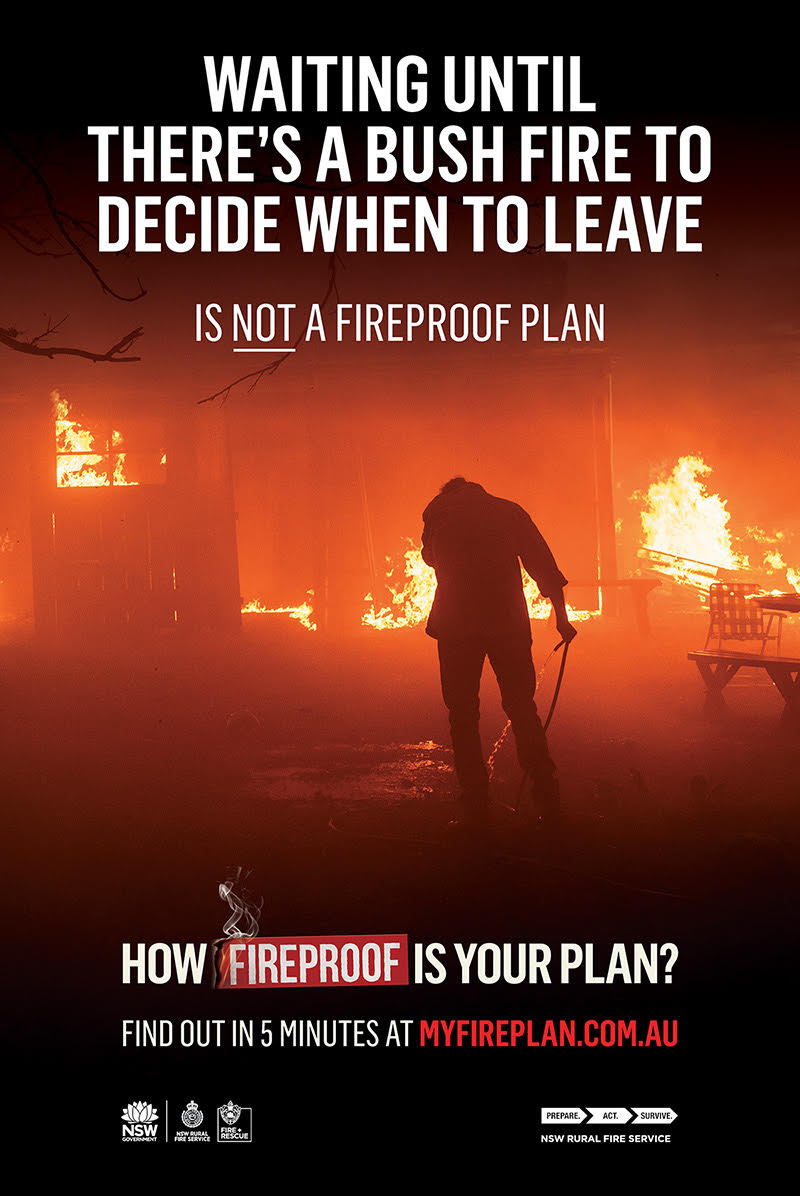 More than 20 of Australia’s leading media companies have thrown their support behind the NSW Rural Fire Service, donating $4 million of free advertising time and space for the organisation’s “How Fireproof Is Your Plan” advertising campaign.

The generosity of the media companies enabled the NSW Rural Fire Service to extend and amplify its advertising communication in both metropolitan and regional areas – a critical activity during the current bushfire crisis. As a result, awareness of the “How Fireproof Is Your Plan” campaign and its key messages significantly exceeded targets.

The initiative to gain media companies’ support was co-ordinated by Barry O’Brien OAM, Chairman of the independent media agency Atomic 212°, which has worked for the NSW Rural Fire Service for the past two years.

“Since 1 July 2019, there has been more than 11,000 bush and grass fires across the state. These have resulted in the loss of 25 lives, including the loss of three volunteer firefighters and three firefighting aircrew, and the destruction of more than 2,000 homes. While there has been great tragedy, the losses would have been much greater if it were not for the response of the community. People have responded to messages about the importance of planning and preparation, and responded swiftly to information and warnings during fire events. This is due, in a large part, to the support from media.

“Over the season, the NSW Rural Fire Service has conducted the ‘How Fireproof Is Your Plan’ campaign, aimed at improving the quality of people’s bush fire survival plans. Through the support of media companies, the industry has provided more than $4 million of additional airtime and placement to this campaign. This has allowed us to reach more people with timely messages about the importance of getting ready for the threat of fire. I would like to thank Atomic 212° and the media companies for your ongoing support in keeping communities informed and better prepared.”

Seven out of 10 people living in bushfire-risk areas said they would go to the organisation’s website for help, information and support. The same proportion said the NSW Rural Fire Service was the most trusted source of information about bushfires and how to plan for them.

Says Barry O’Brien, chairman, Atomic 212°: “Everyone in Australia has been shocked and distressed by the devastating bushfires in NSW, Victoria and South Australia in recent months.

“It’s a national tragedy and Australians have responded accordingly, giving their time, money and skills so generously.

“Thank you to all the media companies who responded so quickly. No one hesitated to get behind the campaign. The support from media has been remarkable and it has ensured the NSW Rural Fire Service’s critically important communication has reached more people than ever before.”