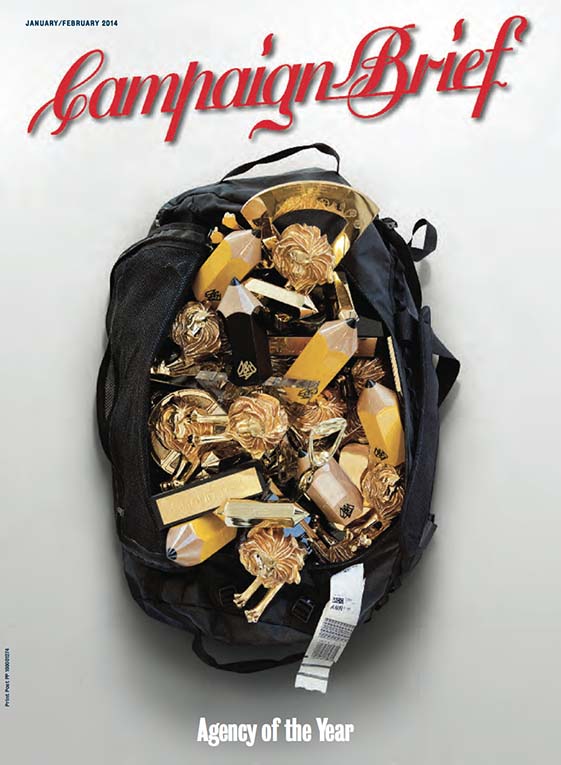 One Melbourne agency staged a phenomenal turn around from a staid multinational to a hot creative force in just over a year. So hot it was by far the most awarded agency in the world in 2013.       McCann Melbourne is

Agency of the Year

Most advertising pundits in the Australian ad industry have been aware that McCann Melbourne has staged a remarkable shift since merging with local independent agency Smart back in 2011.

Up until the merger, McCann continued to operate as a conventional agency, all while the advertising and marketing world evolved rapidly around it.

Smart managing partner, now McCann Worldgroup chief executive Ben Lilley’s takeover plan to move the agency away from a traditional model and towards a “transformational agency with digital at the core”, has been a catalyst for some game-changing campaigns such as the year’s top performer Metro Trains ‘Dumb Ways to Die’, which received the highest praise at every award show it entered. 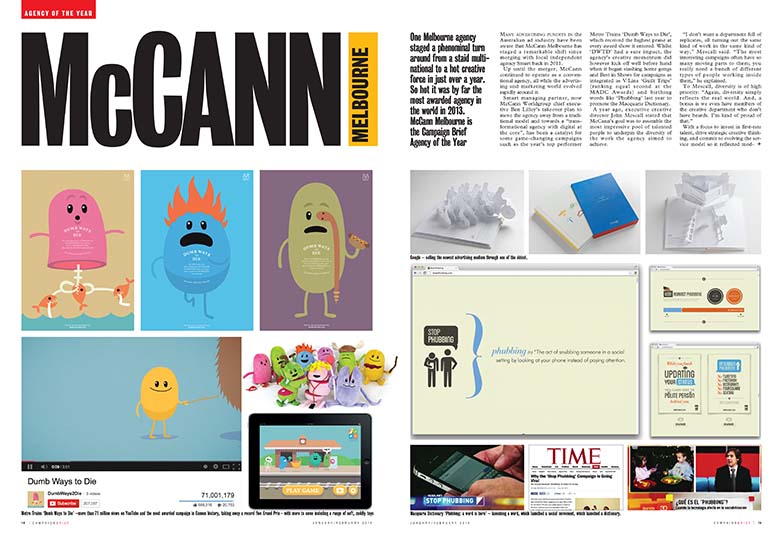 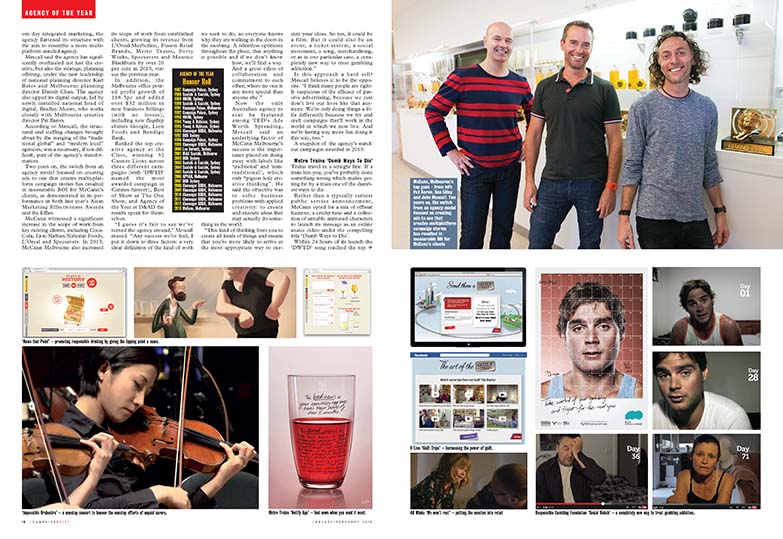 Whilst ‘DWTD’ had a sure impact, the agency’s creative momentum did however kick off well beforehand when it began stashing home gongs and Best in Shows for campaigns as integrated as V/Line ‘Guilt Trips’ (ranking equal second at the MADC Awards) and birthing words like ‘Phubbing’ last year to promote the Macquarie Dictionary.

A year ago, executive creative director John Mescall stated that McCann’s goal was to assemble the most impressive pool of talented people to underpin the diversity of the work the agency aimed to achieve.

“I don’t want a department full of replicates, all turning out the same kind of work in the same kind of way,” Mescall said. “The most interesting campaigns often have so many moving parts to them; you really need a bunch of different types of people working inside them,” he explained. 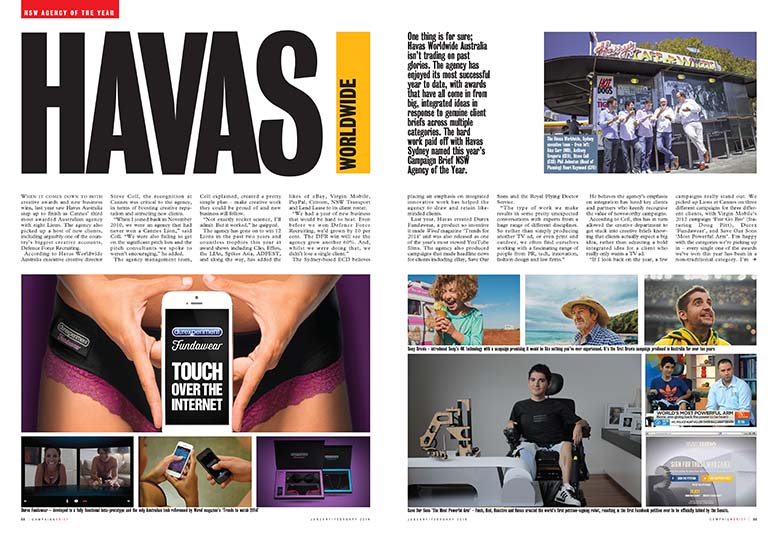 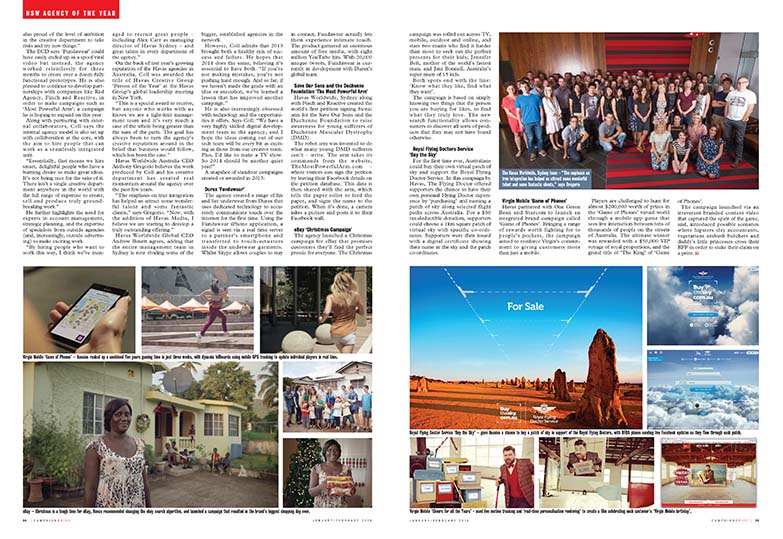 One thing is for sure; Havas Worldwide Australia isn’t trading on past glories. The agency has enjoyed its most successful year to date, with awards that have all come in from big, integrated ideas in response to genuine client briefs across multiple categories. The hard work paid off with Havas Sydney named this year’s Campaign Brief NSW Agency of the Year.

When it comes down to both creative awards and new business wins, last year saw Havas Australia step up to finish as Cannes’ third most awarded Australian agency with eight Lions. The agency also picked up a host of new clients, including arguably one of the country’s biggest creative accounts, Defence Force Recruiting.

According to Havas Worldwide Australia executive creative director Steve Coll, the recognition at Cannes was critical to the agency, in terms of boosting creative reputation and attracting new clients.

“When I joined back in November 2010, we were an agency that had never won a Cannes Lion,” said Coll. “We were also failing to get on the significant pitch lists and the pitch consultants we spoke to weren’t encouraging,” he added.

The agency management team, Coll explained, created a pretty simple plan – make creative work they could be proud of and new business will follow.

“Not exactly rocket science, I’ll admit. But it worked,” he quipped.

The agency has gone on to win 12 Lions in the past two years and countless trophies this year at award shows including Clio, Effies, the LIAs, Spikes Asia, ADFEST, and along the way, has added the likes of eBay, Virgin Mobile, PayPal, Citroen, NSW Transport and Lend Lease to its client roster.

“We had a year of new business that would be hard to beat. Even before we won Defence Force Recruiting, we’d grown by 10 per cent. The DFR win will see the agency grow another 60%. And, whilst we were doing that, we didn’t lose a single client.”

The Sydney-based ECD believes placing an emphasis on integrated innovative work has helped the agency to draw and retain like-minded clients. 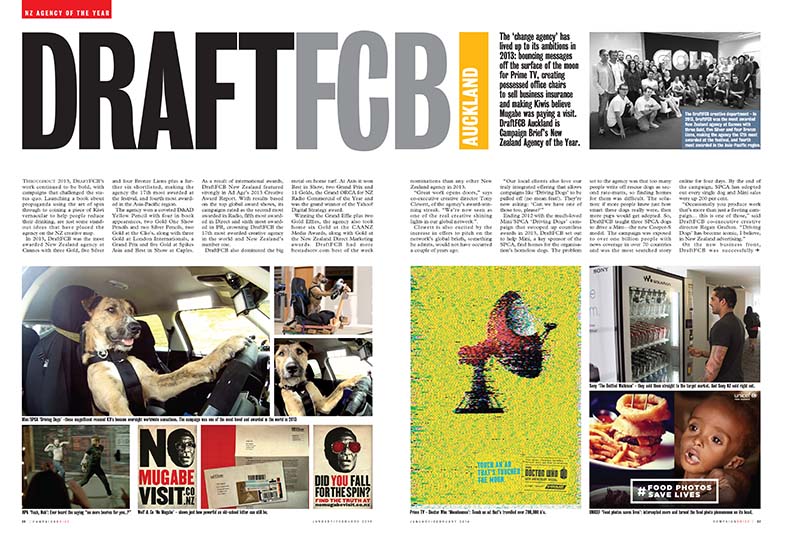 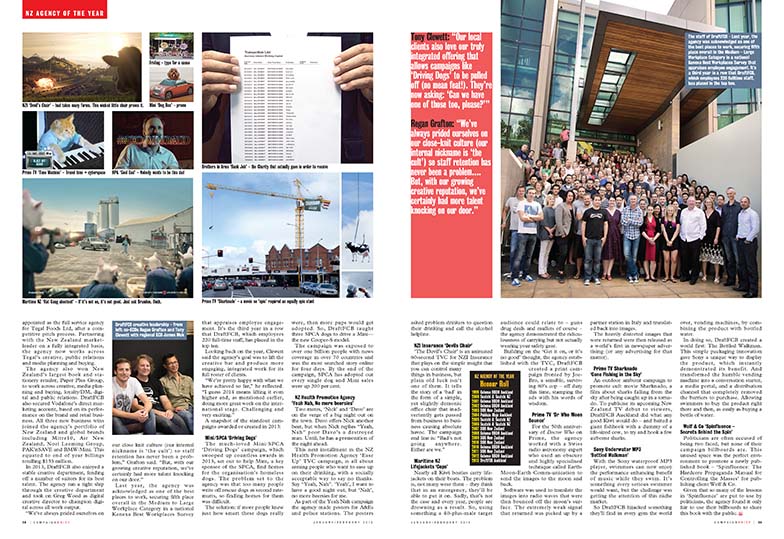 The ‘change agency’ has lived up to its ambitions in 2013: bouncing messages off the surface of the moon for Prime TV, creating  possessed office chairs to sell business insurance and making Kiwis believe Mugabe was paying a visit. DraftFCB Auckland is Campaign Brief’s New Zealand Agency of the Year.

Throughout 2013, DraftFCB’s work continued to be bold, with campaigns that challenged the status quo. Launching a book about propaganda using the art of spin through to coining a piece of Kiwi vernacular to help people reduce their drinking, are just some stand- out ideas that have placed the agency on the NZ creative map.

In 2013, DraftFCB was the most awarded New Zealand agency at Cannes with three Gold, five Silver and four Bronze Lions plus a further six shortlisted, making the agency the 17th most awarded at the festival, and fourth most awarded in the Asia-Pacific region.

The agency won a coveted D&AD Yellow Pencil with four in book appearances, two Gold One Show Pencils and two Silver Pencils, two Gold at the Clio’s, along with three Gold at London Internationals, a Grand Prix and five Gold at Spikes Asia and Best in Show at Caples. As a result of international awards, DraftFCB New Zealand featured strongly in Ad Age’s 2013 Creative Award Report. With results based on the top global award shows, its campaigns rated as the second most awarded in Radio, fifth most awarded in Direct and sixth most awarded in PR, crowning DraftFCB the 17th most awarded creative agency in the world and New Zealand’s number one.

DraftFCB also dominated the big metal on home turf. At Axis it won Best in Show, two Grand Prix and 11 Golds, the Grand ORCA for NZ Radio Commercial of the Year and was the grand winner of the Yahoo! Digital Strategy award.

Winning the Grand Effie plus two Gold Effies, the agency also took home six Gold at the CAANZ Media Awards, along with Gold at the New Zealand Direct Marketing awards. DraftFCB had more bestadsotv.com best of the week nominations than any other New Zealand agency in 2013.

You can view this issue online and subscribe at Campaign Brief Online or contact Mina via email.