M&C SAATCHI/MARK THROWS US A BONE 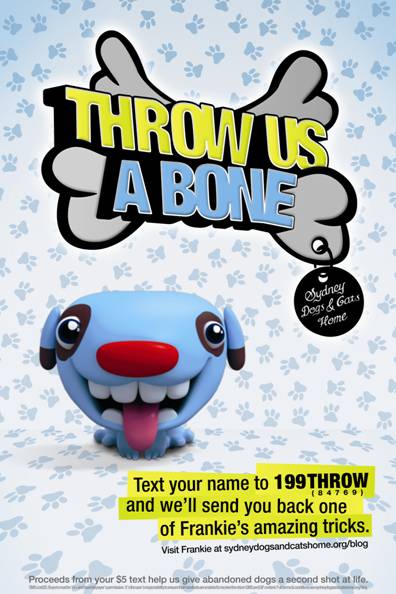 THROW US A BONE, the innovative Sydney Dogs and Cats Home fundraising campaign from M&CSaatchi/Mark Sydney, represents the first time in Australia that people can have a two-way interaction with a live outdoor ad, with your phone.

Launching Wednesday 1st October on a massive 7m x 7m outdoor cinema screen in the Customs House forecourt at Circular Quay, the quirky and playful THROW US A BONE campaign has been designed and animated by Sixty40.

This ground breaking campaign creates a fresh twist on the traditional charity calling card. Instead it rewards generous donors with a gift of hilarious branded content.

As well, by taking the initiative to create its own content, the Sydney Dogs and Cats Home now have the freedom to continue to raise funds with the THROW US A BONE campaign on and off-line. This event will also be supported by a PR push as well as an outdoor, print, direct marketing and online advertising campaign and on social networking sites.

Sixty40 have created an action-addicted character, Frankie the Wonder Dog, who when let loose on his big screen at Customs House, will playfully bark, yelp and more, for people to throw him a bone. Passers-by simply text their name to a campaign number, to throw a virtual bone onto the screen for Frankie. As he grabs the bone, the donor’s name will appear and Frankie will break out into one of his amazing stunts.

The donor will then receive an animated wallpaper of Frankie’s trick on their mobile phone, and $5 will be deducted from their phone account, proceeds from which go to the Sydney Dogs and Cats Home.

“For this idea to work we needed to create a lovable mutt that would stop people in their tracks because they wanted to interact with it. Working with Sixty40 we not only got the content we wanted, they far surpassed anything we were expecting. Basically they stopped us in our tracks,” says Gavin McLeod, Creative Director M&CSaatchi/Mark, Sydney.

Casually juggling chainsaws, break dancing or getting riff-tastic with his air guitar are some of the eight different eye-popping stunts Frankie the Wonder Dog has up his sleeve.

Title: THROW US A BONE