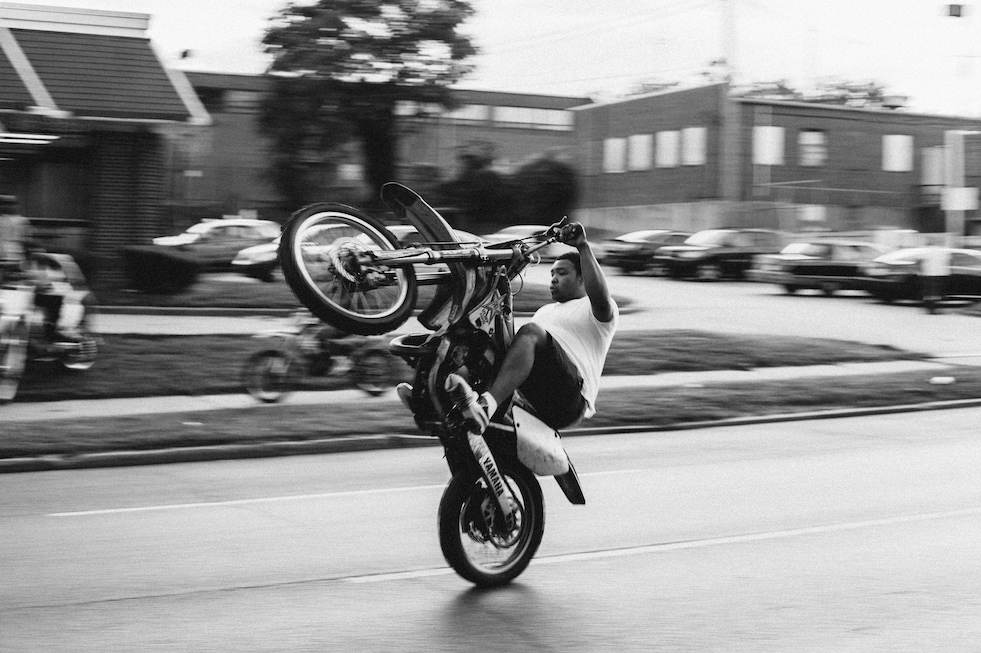 ‘Philadelphia’ takes us into the world of Tony ‘Tone’ Royster A.K.A. Mr Y Not and the Positive Movements Drill Team. Growing up in the Pulaski Housing Projects, an area brought to its knees by guns and drugs, Tone created the ‘Positive Movement Drumline’ to change the narrative which young black people in Philadelphia often find themselves trapped in. Through music and their yelled mantra-cum-warcry “Put Down The Gunz & Pick Up Some Drums” they offer an escape route where they can begin to build a new life and generate a new story for themselves.

Thorne’s second instalment of Hego’s journey, ‘Baltimore’ takes us on a driving tour of the city with Wheelie Wayne of the 12 O’Clock Boys. What would appear as dirt bikers seeking a thrill becomes, in Wayne’s words: “Pick up a bike, put down a gun”. Through his streetwise eyes the bikes are an alternative to gun crime and a means for local youth to forge positive relationships with one another. Wayne exudes warmth as he talks of his dirt biking family and the love and acceptance he sees between bikers. From elderly neighbours waving from their porches to inmates who refuse to go to lunch until they see the 12 O’Clock Boys pass. They have taken on a legendary status in their hometown, growing into an inspirational focal point for all of Baltimore.

Hego works alongside these communities to create murals celebrating the impact they have made and sheds light on the positive change each of them spark locally. These are not only stories worth telling, but stories worth sharing and the inspiring individuals behind them supported and celebrated.

To donate to support the Positive Movements Drill Team in Philadelphia follow the link here.

For all commercial enquiries please contact Hannah Nixon at The Pool Collective hannah@thepoolcollective.com / +61 405 775 097