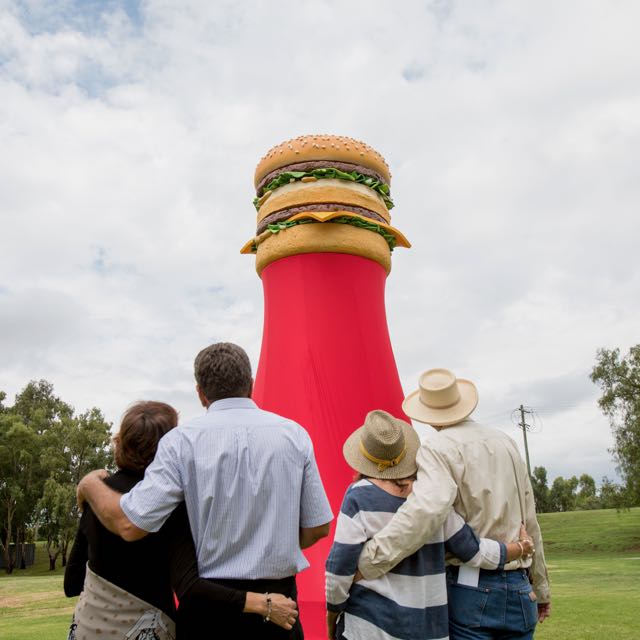 Macca’s kicked off this year’s Australia Day celebration in the biggest way it can, showing the love to local legends who produce ingredients for one of its classics, with the launch of the Down Under Big Big Mac via Eleven.

From the Big Banana, to the Big Prawn and Merino, the Down Under Big Big Mac has been added to Australia’s famous list of ‘big things’ that honour local produce, as a thanks to the Aussie farmers that make the iconic Big Mac so great.

The towering tribute, over 8 metres tall, was officially unveiled in the agricultural hub of Tamworth, NSW by Tamworth Region Mayor, Col Murray, this Australia Day (26 January 2017).

Says Jo Feeney, director of marketing at Macca’s: “With locally sourced beef, lettuce, pickles and wheat, it’s our homegrown ingredients that help make the Big Mac an Aussie favourite. We think the Down Under Big Big Mac is a fitting way to say thanks to our Aussie farmers and suppliers in Australia.”

Says Col Murray, Tamworth region mayor: “We’re incredibly excited to welcome the Down Under Big Big Mac to Tamworth. Agriculture is at the heart of our community with farmers taking great pride in supplying the tastiest and best produce. The Down Under Big Big Mac is a great way to say thanks to the farmers here in Tamworth and across the country who help keep Australian agriculture prosperous.”

Those in Tamworth today will be able to get a bite of the action, by heading to Waler Park (Kable Avenue) and snapping a pic with the ‘you-beaut’ monument.

Aussies further afield can give their own nod to the country’s farmers by enjoying their Big Mac ‘Down Under’ style, upside down, and sharing a snap on social this Australia Day.