Macca’s celebrates friends, family and food in new ‘Together & Lovin’ It’ work via DDB Sydney

McDonald’s and DDB Sydney have debuted a new creative platform, ‘Together & Lovin’ It’, to kick off a Summer of great Aussie combinations: family, friends, and flavours.

The platform spotlights that when things are combined in just the right way, great things can happen. Especially during a Summer in which Aussies will be Together & Lovin It.

In the lead up to launch, the platform was teased by showcasing great Aussie combinations and asking people who they are going to spend their Summer with through print, social, OOH, TV, and in-stadium executions.

The official launch has now been led by a hero TVC celebrating the magic of a road trip to bring people together.

The 60” spot features cars packed with family and friends, a man changing a muddy tyre for a vehicle with the numberplate NU663T, and one duo on an electric scooter, all set to the most epic sing-a-long of all: Bon Jovi’s ‘Livin’ on a Prayer’. And of course, it wouldn’t be a Summer road trip without a stop (or more) at Macca’s.

The thought of ‘Together & Lovin’ It’ has been extended through multiple activations including billboards at Sydney airport to welcome people back home, a social content series to bring the beauty of a road trip to life, and much more.

Says Tim Kenward, marketing director, McDonald’s: “Macca’s is an iconic part of Aussie summer. In addition to bringing together the perfect combination of ingredients to make our iconic products, Macca’s is also known for bringing people together to create meaningful memories.

“After a year of constant change, ‘Together & lovin’ it’ is a timely reminder of the joy and happiness that comes with being together with friends, family and those we love.”

Says Matt Chandler, executive creative director, DDB Sydney: “This is the Summer of being reunited, of roads packed with people off to see loved ones, or going on holidays. And a road trip just isn’t the same without a trip to Macca’s. This campaign is all about capturing the thrill of being together and lovin’ it. Because as a wise man once said, ‘We’ve got each other and that’s a lot.’”

From now until the end of Summer, Macca’s is ensuring people are ‘Together & Lovin’ It’ through a range of iconic brand partnerships, collaborations, promotions, and new menu items, including the recently announced Tim Tam McFlurry, Chicken Big Mac, Big Mac Bacon, Onion Rings, and BBQ Sauce, with more to come.

The first work as part of the new platform caps off DDB’s 50th year of partnership with McDonald’s locally. The brand celebrated its 50th Australian birthday in July with a campaign thanking customers and crew members alike. 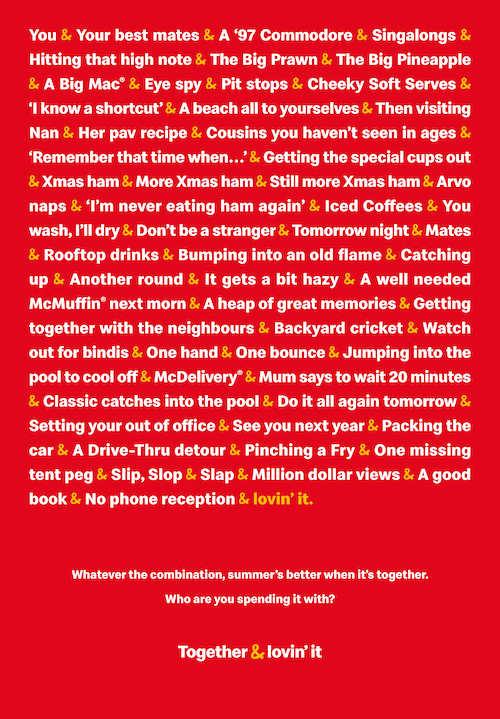