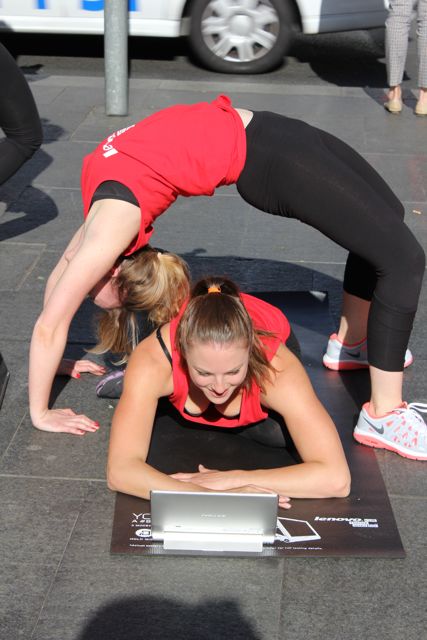 As part of the campaign – the first XPO Brands has executed for Lenovo – special events will be held in both Sydney and Melbourne using yoga to promote the tablet’s flexible hold, tilt and stand capability. XPO created a content driven, experiential activation, which coincided with the tablet’s Australian launch.

Ashton Kutcher’s involvement as recently appointed Brand Product Engineer has also been integral to the launch of the range globally.

At the first event, a purpose-built experiential Lenovo Yoga Studio was created at Custom’s House in Sydney, where consumers were encouraged to engage in the social sharing led activity, as part of a ‘Lenovo Yoga Challenge’ competition to win a tablet of their own.

To execute the competition, XPO developed a Lenovo Yoga Challenge App, which lead consumers through Lenovo Yoga poses step-by-step based on Lenovo’s real-life flexibility.  Once the customer had reached the correct pose and aligned the screen with their face, they could enter the competition by sending in a snapshot. The app also superimposed consumers’ faces onto extreme contortionist  yoga poses while they are in the Lenovo Yoga Studio, enabling them to share ‘their moves’ via social networks.

Sally Tobin, managing director XPO Brands said the campaign was developed by the agency to help build awareness of the tablet as it launched on the Australian market, following a competitive pitch.

Says Tobin: “We’ve had enormous fun putting this experiential campaign together. Strategically, we felt it was paramount for the public to develop a personal involvement with the brand.  We want them to experience the brand’s flexibility in their everyday lives rather than just telling them about it.  Our experiential campaign puts the consumer at the heart of the idea and allows them to curate highly unusual social content.”

The Lenovo Yoga Studio will be moving to Melbourne’s Federation Square on November 14, where Victorians can try their hand (and their bodies) at some flexible Lenovo moves.