‘How Australia got its Mojo’ to air on ABC tomorrow (October 1); Hosted by Gruen’s Russel Howcroft, the film reflects what many regard as the golden era of Aussie advertising 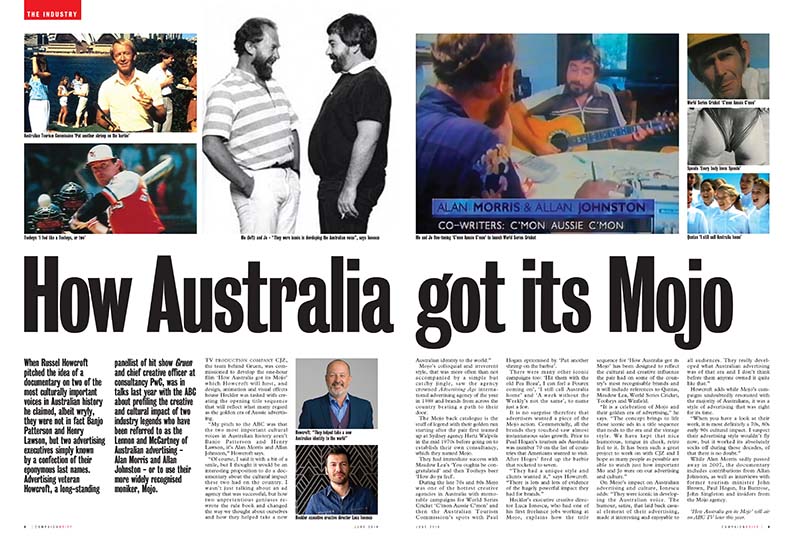 The one-hour film ‘How Australia got its Mojo’, produced by TV production company CJZ, the team behind Gruen, will air on the ABC at 8.30pm tomorrow night (Tuesday October 1). Hosted by Gruen’s Russel Howcroft, the film reflects what many regard as the golden era of Aussie advertising. Design, animation and visual effects house Heckler was tasked with creating the opening title sequence.

When Russel Howcroft pitched the idea of a documentary on two of the most culturally important voices in Australian history he claimed, albeit wryly, they were not in fact Banjo Patterson and Henry Lawson, but two advertising executives simply known by a confection of their eponymous last names. Advertising veteran Howcroft, a long-standing panellist of hit show Gruen and chief creative officer at consultancy PwC, was in talks last year with the ABC about profiling the creative and cultural impact of two industry legends who have been referred to as the Lennon and McCartney of Australian advertising – Alan Morris and Allan Johnston – or to use their more widely recognised moniker, Mojo.

TV production company CJZ, the team behind Gruen, was commissioned to develop the one-hour film ‘How Australia got its Mojo’ which Howcroft will host, and design, animation and visual effects house Heckler was tasked with creating the opening title sequence that will reflect what many regard as the golden era of Aussie advertising.

“My pitch to the ABC was that the two most important cultural voices in Australian history aren’t Banjo Patterson and Henry Lawson, it’s Alan Morris and Allan Johnston,” Howcroft says.

“Of course, I said it with a bit of a smile, but I thought it would be an interesting proposition to do a documentary about the cultural impact these two had on the country. I wasn’t just talking about an ad agency that was successful, but how two unpretentious geniuses re- wrote the rule book and changed the way we thought about ourselves and how they helped take a new Australian identity to the world.”

Mojo’s colloquial and irreverent style, that was more often than not accompanied by a simple but catchy jingle, saw the agency crowned Advertising Age International Advertising Agency of the Year in 1988 and brands from across the country beating a path to their door.

The Mojo back catalogue is the stuff of legend with their golden run starting after the pair first teamed up at Sydney agency Hertz Walpole in the mid 1970s before going on to establish their own consultancy, which they named Mojo.

They had immediate success with Meadow Lea’s ‘You oughta be congratulated’ and then Tooheys beer ‘How do ya feel’.
During the late 70s and 80s Mojo was one of the hottest creative agencies in Australia with memorable campaigns for World Series Cricket ‘C’mon Aussie C’mon’ and then the Australian Tourism Commission’s spots with Paul Hogan epitomised by ‘Put another shrimp on the barbie’.

There were many other iconic campaigns too: ‘Hit them with the old Pea Beau’, I can feel a Fourex coming on’, ‘I still call Australia home’ and ‘A week without the Weekly’s not the same’, to name just a few.

It is no surprise therefore that advertisers wanted a piece of the Mojo action. Commercially, all the brands they touched saw almost instantaneous sales growth. Prior to Paul Hogan’s tourism ads Australia was number 70 on the list of countries that Americans wanted to visit. After Hoges’ fired up the barbie that rocketed to seven.

“They had a unique style and clients wanted it,” says Howcroft. “There is lots and lots of evidence of the hugely powerful impact they had for brands.”

Heckler’s executive creative director Luca Ionescu, who had one of his first freelance jobs working at Mojo, explains how the title
sequence for ‘How Australia got its Mojo’ has been designed to reflect the cultural and creative influence the pair had on some of the country’s most recognisable brands and it will include references to Qantas, Meadow Lea, World Series Cricket, Tooheys and Winfield.

“It is a celebration of Mojo and their golden era of advertising,” he says. “The concept brings to life those iconic ads in a title sequence that nods to the era and the vintage style. We have kept that nice humorous, tongue in cheek, retro feel to it. It has been such a great project to work on with CJZ and I hope as many people as possible are able to watch just how important Mo and Jo were on our advertising and culture.”

On Mojo’s impact on Australian advertising and culture, Ionescu adds: “They were iconic in developing the Australian voice. The humour, satire, that laid back casual element of their advertising, made it interesting and enjoyable to all audiences. They really developed what Australian advertising was of that era and I don’t think before them anyone owned it quite like that.”

Howcroft adds while Mojo’s campaigns undoubtedly resonated with the majority of Australians, it was a style of advertising that was right for its time.

“When you have a look at their work, it is most definitely a 70s, 80s early 90s cultural impact. I suspect their advertising style wouldn’t fly now, but it worked its absolutely socks off during those decades, of that there is no doubt.”

While Alan Morris sadly passed away in 2007, the documentary includes contributions from Allan Johnston, as well as interviews with former tourism minister John Brown, Paul Hogan, Ita Buttrose, John Singleton and insiders from the Mojo agency.

‘How Australia got its Mojo’ will air on ABC TV on Tuesday October 1 at 8.30pm.

Campaign Brief Subscribers can view the Mojo issue online and view past issues going back to 2007 (+ print pages and spreads) so it’s well worth the investment.