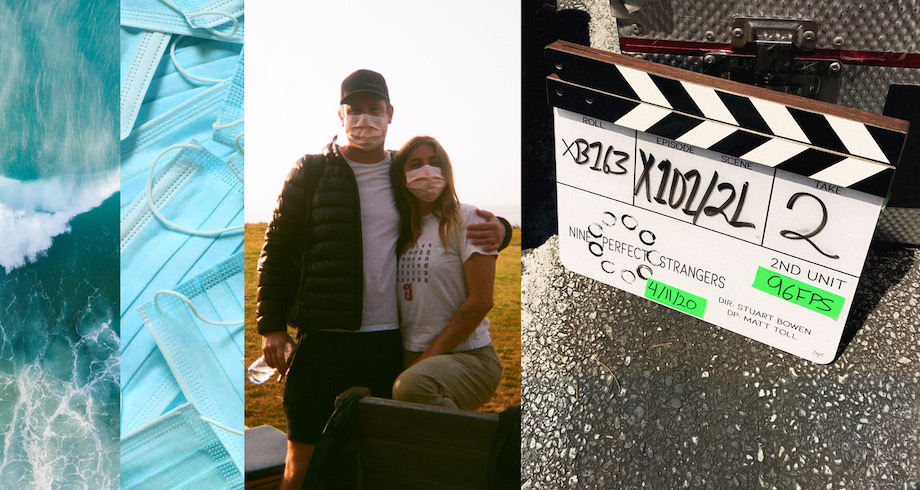 Good Oil director Stuart Bowen spent three months in Byron Bay directing second unit on Hulu’s new series ‘Nine Perfect Strangers’ directed by Jonathan Levine, starring Nicole Kidman and Melissa McCarthy. Stuart left the Northern Rivers with a tan (relatively) and some wisdom about working with A-listers, getting the most out of your mask and embracing being the poor cousin on a $100 million dollar show. Below is his obesely unveiled attempt to drum up work.

1. Linen makes you a better director
Wearing linen helps you access the light gravitas of David Lean on a sand dune, and puts your film craft on a breathable pedestal. Halfway through the day it can also be a pleasant escalation to roll your sleeves up for a kind of ‘serious Obama who’s not afraid to muck in’ vibe.

2. Your mask is a tool, not a hindrance
As we push deeper into covid-21, the mask can be a director’s wingman. If you happen to be asked last minute to direct a shot of a character running, where the only description in the script is ‘part of a montage. She jogs’, it’s tricky when the actor asks what her character’s motivation is. If said actor isn’t satisfied by ‘your character doesn’t want to get fat,’ you can pretend she misheard you. Within the time it takes you to performatively adjust the mask you can think up another response, but if you say ‘to try and out-run her childhood trauma’, make sure you can substantiate the claim.

3. You’re not as important, but that’s fine…you were never going to be
Second Unit is both vital yet relationally always less important than Main Unit. Second Unit is the poor cousin you shouldn’t stare at, but it’s often more fun. While they’re inside shooting 6 pages of dialogue, you’re in a dandelion field mallicking around for texture while a UE Boom blasts non-stop bangers.

4. You’ll gain 9 Perfect Kilograms
Unlike commercials, catering is no longer a 1-3 day treat, it’s your reality for weeks on end. Having a four course breakfast isn’t levelled out by simply saying no to every second dessert at lunch (Note: masks don’t only allow the ‘muffle gambit’, they can also help create slimming geometric lines on a face which is fast-developing an over-satiation narrative).

5. Shooting in Byron Bay is a dissonant challenge
On one hand, Byron is today’s representation of biblical Eden, on the other hand it’s an alarmingly unstable place. Like an Adele concert, everyone is there. It’s a hedonistic mix of hempy ayurvades navigating their constantly unfolding phenomena, powdery city-folk on a three day bender, too many families with too many inflatable toys, kale-clad influencers who want you to buy their products and angry locals who are rightly exasperated that it takes 2 hours to do a mainy. Working in what is essentially a holiday turned party destination is anomalous – especially when dodging the stumble of backpackers on your way to set at 4:30am in a rented Kia Picanto.

6. Ask forgiveness, not permission
You seldom have all the information you need – you just have to keep on keeping on. Seek answers where you can – hunt and gather, forage with instinct…and if you have the option to make it look effortless, that’s the dream made reality.

7. A-list actors are just like you or I
They eat, they shit, they have low self esteem – the difference is they can afford to look better while doing it. You don’t need to be able to empathise with their issues, but exhibiting signs of sympathy for ‘having to fly commercial’ while not looking them in the eye is important.

8. Flexibility is key
One day you might be shooting a Lamborghini at sunrise with a Russian arm (I’m now a car guy 🙋🏼‍‍Lexus/BMW etc), or working with drone operators to cover stunts at a waterfall (🙋🏼‍‍Beer/Nike ads etc), or shooting a complex VFX sequence (🙋🏼‍‍anything you couldn’t book Ian Pons Jewell for), or working with an actor to create a performance which feels authentically alive (🙋🏼‍‍all ads). If you happen to find yourself without a clue, just put on a North Face jacket – it’s very convincing.

9… True love is ageless?
To be honest I couldn’t think up a 9th lesson, but if Nicole and Keith’s relationship isn’t a resplendent and hopeful reminder that you can find your great love after 35, I don’t know what is (though a passion for country music is allowed to be a legitimate deal-breaker).

That’s the end of the list, hopefully you found a tangible morsel in there, cheers highly for reading.

Says Sam Long, executive producer and partner, Good Oil: “We’re excited to have Stuart back in Sydney and look forward to working together with agencies and clients as he folds this awesome experience into his commercial work. Stuart’s razor-sharp creative instincts, keen eye for detail, dexterous communication skills, passion, charisma, uniqueness, nerve…(obviously this is still Stuart writing in an attempt to bring EP-nile legitimacy to the article). Regardless – here’s to potentially supping under an ideation canopy with you while making something brilliant.”