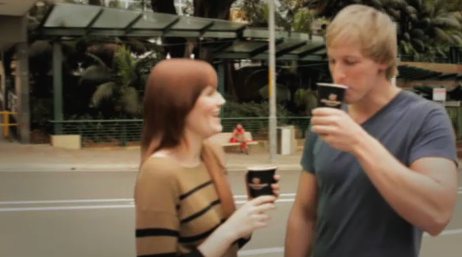 Talking about the partnership, Gloria Jean’s Coffees general manager,Gareth Pike, says, “This is one of the most anticipated televisionseries Australia has ever witnessed, so it was an obvious choice forGloria Jean’s Coffees. It’s undoubtedly the most ambitious initiativethe brand has ever rolled out and is designed to generate a significantbrand reappraisal as well as targeting a new guest demographic.” 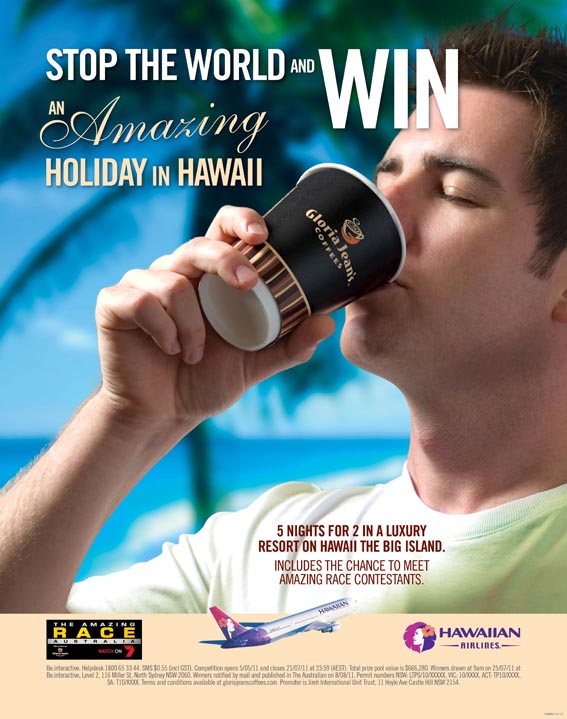 Beginning on Monday 16th May 2011 to coincide with the launch of the firstAustralian series, the integrated marketing campaign will embrace aseries of tactical activities including above‐the‐line advertising, aswell as below‐the‐line activity including a social media campaign,product placement and in‐coffee house sales promotions.

As part of the largest campaign Gloria Jean’s Coffees has everundertaken, a consumer promotion will roll out in all coffee housesacross the country. The total prize value of over $630,000, includesstate winners of luxury holidays for two to Hawaii with a coffeeplantation tour and a Sunbeam Café Series Espresso Machine &Grinder to be won in each individual coffee house. Thousands of instantwins are also up for grabs.

Gareth Pike adds, “This campaign will help maintain Gloria Jean’sCoffees’ position as market leader in Australia by engaging our targetaudience and communicating with them effectively. Most importantly it’sgoing to be lots of fun and has franchise partners and team membersreally excited”.

With its multi‐layered approach, the initiative will engagenumerous media channels and leverage the show’s official mediapartners, including Seven Network and its publishing arm, PacificMagazines. The partnership will feature new brand and promotionaltelevision commercials shown on Channel 7, as well as a printadvertising campaign confirmed for Australian Good Taste, ColesMagazine, Men’s Health and Woman’s Health.

Supporting the initiative, Gloria Jean’s Coffees will carry out aninternal engagement and incentive program with its Franchise Partnersand coffee house teams. Each of its 458 coffee houses will be providedwith a comprehensive campaign tool kit, signage and point of sale, aswell as competition prizes such as a Sunbeam Café Series EspressoMachine and Burr Grinder. Additional assistance will also be providedthrough the Gloria Jean’s Coffees Support Office.