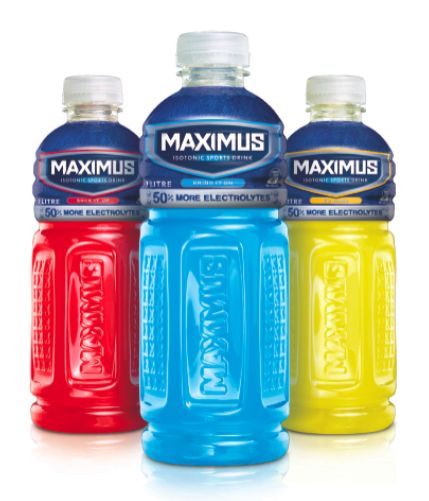 The one litre ‘man-sized’ bottles, which contain 50% more electrolytes than the leading Australian isotonic sports drink, have the same RRP as its 600ml competitors, giving sports drink consumers more “more bottle for your bucks”.

Saltmine was involved from the conception of this project, working with the Frucor team to determine the brand identity, positioning and strategy for the new brand. The visual identity features the bold Maximus logo, a shield device, which throughout time has been reminiscent of masculinity and groups of males going forth and conquering. The ‘strong man’ steel grey colour theme with a bold, masculine and sharp font again reinforces the brand identity. The three variants in the range are named: “Bring it on”, “Suck it up” and “Go Hard”, reinforcing the brute strength of the brand.

To support the launch, Saltmine designed an extensive point-of-sale suite including modular window decals and trade presentation boxes. The graphics include bottles breaking through steel, sparks and metal rivets. Frucor’s sales force was revved up with a sizzle reel, also produced by Saltmine.

Says Andrew Fenwick, Frucor brand manager: “The trade response from customers has been overwhelmingly positive. They recognised that Maximus plugged a gap in the market, resulting in some fantastic planograms with a share of shelf that rivals the two leading sports drinks brands.”

The Maximus sports drink range will appear in Coles and convenience stores throughout the country this month.