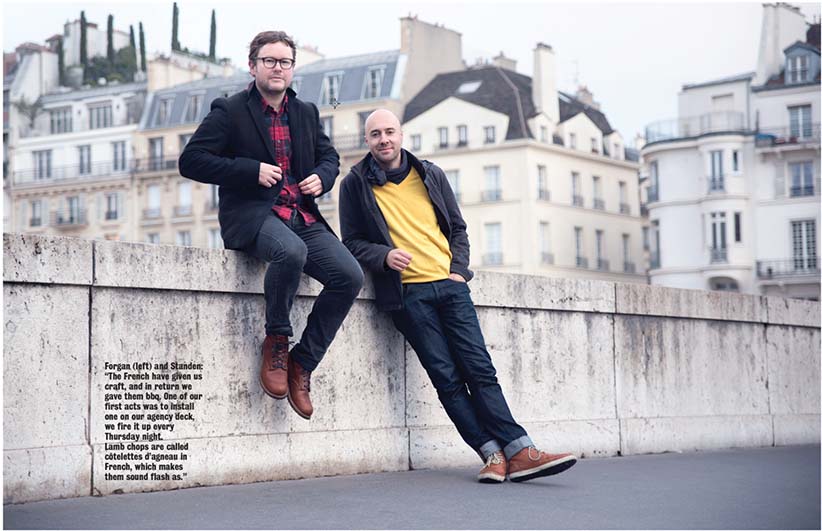 Mark Forgan and Jamie Standen started their ad careers at Clemenger BBDO Wellington, then six years later moved to the opposite side of the world and become French, at least a little bit. First stop was Y&R Paris, then CLM BBDO Paris. In 2012 the pair left with the ECDs, Jean-Francois Sacco and Gilles Fichteberg, to help them and ex Publicis president Jean-Patrick Chiquiar launch a new agency, Rosapark Paris. CB takes a closer look…

Why did you both move to France?

We get asked this question almost every day, but there’s still no clear answer! We’d done about six years at Clemenger BBDO in Wellington and wanted to see a bit of the world. London’s a pretty classic move, but we thought we’d go a few hundred kilometres further and see what France was like. We didn’t have a job lined up when we arrived. We just turned up with our portfolios under our arms, which was pretty naïve in hindsight, but everything worked out in the end – there are worse things than spending the summer months unemployed in Paris. Just as our savings were running out, we got a job at Y&R Paris. That was when they realised we didn’t speak French.

Was it a culture shock to be working in a French agency?

Day to day, for sure. People smoking inside, creatives pitching up to work at 11am, kissing everyone on the cheek when you walked into a meeting – suits, clients, even the dudes. In terms of working in the creative department, we just kept up the habits we’d learnt from Duster at Clemenger BDDO: generating lots of ideas as fast as we could, which put a bit of pressure on other teams who were used to presenting one or two ideas at a time. In that respect, the culture shock worked in both directions!

So teams work differently in Paris?

When we talk about a team presenting one or two ideas, it’s not to say they’re lazy. It’s more that they prefer to craft something up before presenting it, whereas we’re still quite comfortable showing squiggles on paper. The emphasis on craft is huge in France. If given the choice between something beautiful with no idea, and a great idea that looks a bit stink, many French creatives would be torn in two. In New Zealand we used to present to the client concepts that were drawn up by the art director – does that still happen anywhere? It certainly doesn’t here.

Where are you working now?

After a stint at BBDO Paris working mainly on Pepsi International, we left with the executive creative directors, Jean-Francois Sacco and Gilles Fichteberg, to help them and ex Publicis president Jean-Patrick Chiquiar launch a new agency, Rosapark Paris. To start a fresh agency was a huge challenge, with all hands on the pump trying to win business and grow the agency. It’s our first gig as creative directors too, and after the initial year of pitching we had to then get the creative reputation up and visible. The Brother ‘Circus’ tv commercial was our first experience in the creative director chair and it’s had a great response in the international shows we’ve entered so far.

We really try to have the best of both worlds. As we said, one thing we’ve learnt from the French is a strong emphasis on craft, and this is something that’s really valued at the agency. On top of that, the agency is in a district of Paris that is famous for craft, in terms of things made by hand. On our street there are guys working with brass, people making the plaster moulures that you use to jazz up your ceiling, and around the corner there’s Hermès Atelier where they’re stitching everything by hand. So the French have given us craft, and in return we gave them bbq. One of our first acts was to install one on our agency deck, we fire it up every Thursday night. Lamb chops are called côtelettes d’agneau in French, which makes them sound flash as.

Are your clients mostly French?

The majority of them are. Our biggest client is a French urban supermarket called Monoprix who have won a whole lot of design and packaging awards for their own label products. They’re always up for creative work. Last year, for example, we changed the supermarket checkout ‘beep’ when Monoprix branded products were scanned to a sound that represented the product. Milk made a ‘mooo’, eggs made a ‘cluck’, tissues a sneeze, and so on. But we are working on more and more international accounts, notably Thalys, the trans-European train network, and Brother International, who are based in the UK.

What was the agency’s first creative success?

We created human emoji for our client Innocence in Danger, which turned out to be something people really wanted to see – or not see, they’re pretty hideous. They were widely shared around the world. The ‘dog fat pants’ campaign was in a similar category – a simple image that people loved to see and share. A great image still seems to be an easy, effective way to get someone’s attention, including and especially online – the surfer is scrolling at 100kph and you got to stop them in their tracks!

Is it true what they say about long lunches in France?

Unfortunately not! People in agencies here have as little time and as many briefs as people in agencies elsewhere. All the stuff about the holidays is true though – Paris in August is actually a ghost town, except for a few tourists. We prefer to work during this time, there’s no one in the office to disturb us.

So do you speak French yet?