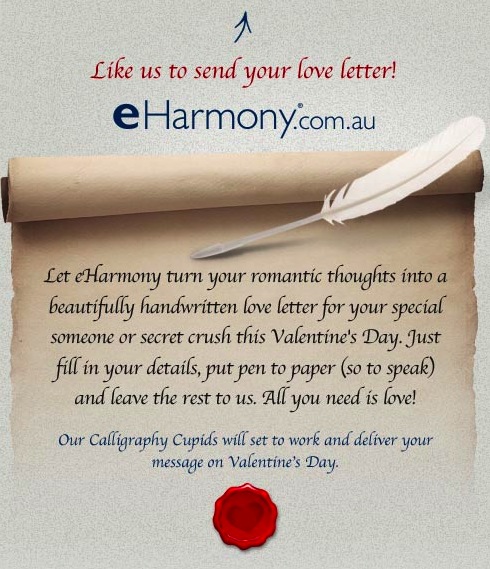 eHarmony.com.au has created a way to fuse the convenience and ease of online communication, with the old world romance and thoughtfulness of the handwritten letter and have enlisted a  team of calligraphy cupids who will be converting Valentine’s Day messages, submitted online through the eHarmony Facebook page into authentic handwritten love letters.

In the lead up to Valentine’s Day, from 3 – 8 February, Australians will be able to type out a message of adoration, appreciation or flirtation into a purpose built tab on the eHarmony Facebook page.

These digital messages will then be dispatched to specialised teams of calligraphers stationed around the country that will convert each and every one into a genuine handwritten love letter, transcribed onto beautiful paper and sealed in a personally addressed envelope to be delivered in time for Valentine’s Day.

eHarmony have enlisted etiquette expert, Anna Musson, as a campaign spokesperson. She believes that it no longer takes much effort to stand out in a world where good manners have become lax and laziness often prevails.

Says Musson: “It can’t be denied that the romantic gestures of the past are slowly fading. Love letters were once the glue that held relationships together. Now, handwritten letters have become almost obsolete – receiving one in the mail is a pleasant surprise. This has happened for good reason. Writing a letter is no longer convenient nor is it particularly timely. Online communication tools like email and social media are immediate, reliable, free and, quite simply, more suited to our constantly evolving lifestyle. But the fact is, we still love receiving a handwritten note!”

Australia Post spokesperson, Melanie Ward, agrees, stating: “Although letter volumes are declining overall, we still find that people love receiving personal letters. It’s such a nice surprise to see a handwritten letter poking out from the pile of bills. The tangibility means that you can treasure them forever, keep them to show your children and grandchildren – a text message just can’t compete with that.”

The eHarmony Love Letters campaign will launch on Friday 3 February and will run until midnight on Wednesday 8 February 2012, or until the allocation of letters has reached capacity.