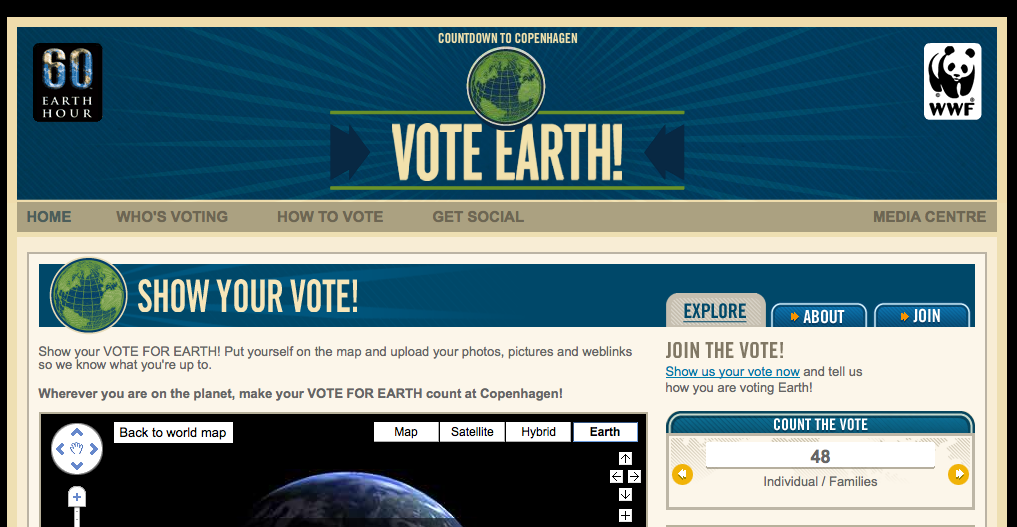 The new ‘Show Your Vote‘ platform, developed aspart of Earth Hour’s Vote Earth campaign, asks people to show their Vote forEarth (over Global Warming) in the lead up to the UN Climate Summit inCopenhagen this December.

‘Show Your Vote‘ enables supporters toshow their Vote for Earth online by pinpointing their location on a Google Map.  Users can also add photos, videos andlinks, which will be displayed in a pop-up when their map pin is clicked.

Theplatform is open source, free, available to everyone and can easily be added toany web page, with or without Earth Hour branding. It can be customised to suitthe look and feel of the host website and can easily include a modifiedmessage.

EarthHour Executive Director, Andy Ridley called on people, companies and communitygroups to use the platform to influence the outcome of the most importantdecision human society has ever faced.

“Show Your Vote helps give a voice tobillions of people who would otherwise have no chance to let world leaders knowthey want action on climate change at Copenhagen.

“Join thehundred of millions of people who Voted Earth during Earth Hour by getting onthe platform and showing your Vote for Earth,” said Mr Ridley.

“Throughmy own experience and research of climate change I realized there was a need toallow people to illustrate their support for a fair and just outcome at theCopenhagen Climate Summit.

“Show Your Vote is a great example ofusing technology to give people a voice,” said Mr Baird.

Togenerate their map pin, supporters complete a simple online form where theywill be asked to enter their name, location and the reason why they are VotingEarth.

The mapwill function in a similar way to Google My Maps. Supporters will be able tointeract by dragging to move around the map and by drilling down from world tostreet level.