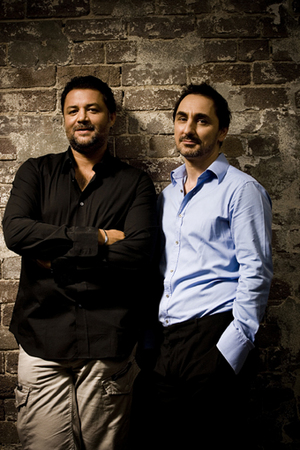 CB Exclusive – Advertising agency Droga5, which is headquartered in New York, has announced today that it would be closing its Sydney office. Although the Sydney office – which was founded by David Droga, David ‘Nobby’ Nobay, Sudeep Gohil and Marianne Bess in January, 2008 – enjoyed an exceptionally strong start, it struggled to maintain that momentum in recent years.

The news comes just two months after Nobay returned full-time to the agency to fully oversee the agency’s creative product, following the decision of executive creative director, Steve Coll, to resign from the agency, just over a year since joining from Havas Australia.

Says David Droga (near left, with Nobay), creative chairman and founder of Droga5 told CB: “This was obviously a very difficult decision, both professionally and personally, and as a proud Australian, it was a bitter pill to swallow. However, we see little value in continuing to operate in this market with an office that, sadly, no longer consistently represents the Droga5 brand.

“Despite world-class local management and many talented individuals working hard, the Sydney office has floundered over the past few years. Some of it was self-inflicted, some of it bad luck and some of it just the befuddling local advertising market. Regardless, we aren’t a company that measures its success by the number of its offices, but rather by the creative output, positive influence and culture of each office.”

The Sydney office will officially close its doors before the end of the year.

Says Sarah Thompson, Droga5’s global CEO: “We continue to realize strong growth in the U.S., and are focusing on creating a world- class leadership team in Europe while simultaneously exploring potential models of offerings in China as our two key priorities outside the U.S.”

Droga5 recently announced the hire of a new CEO, Bill Scott, for its London office. Scott joins from Grey London. Additional key creative hires are expected to be announced in the coming weeks.