Digital in Australia: Time spent online has increased by 10% year-on-year 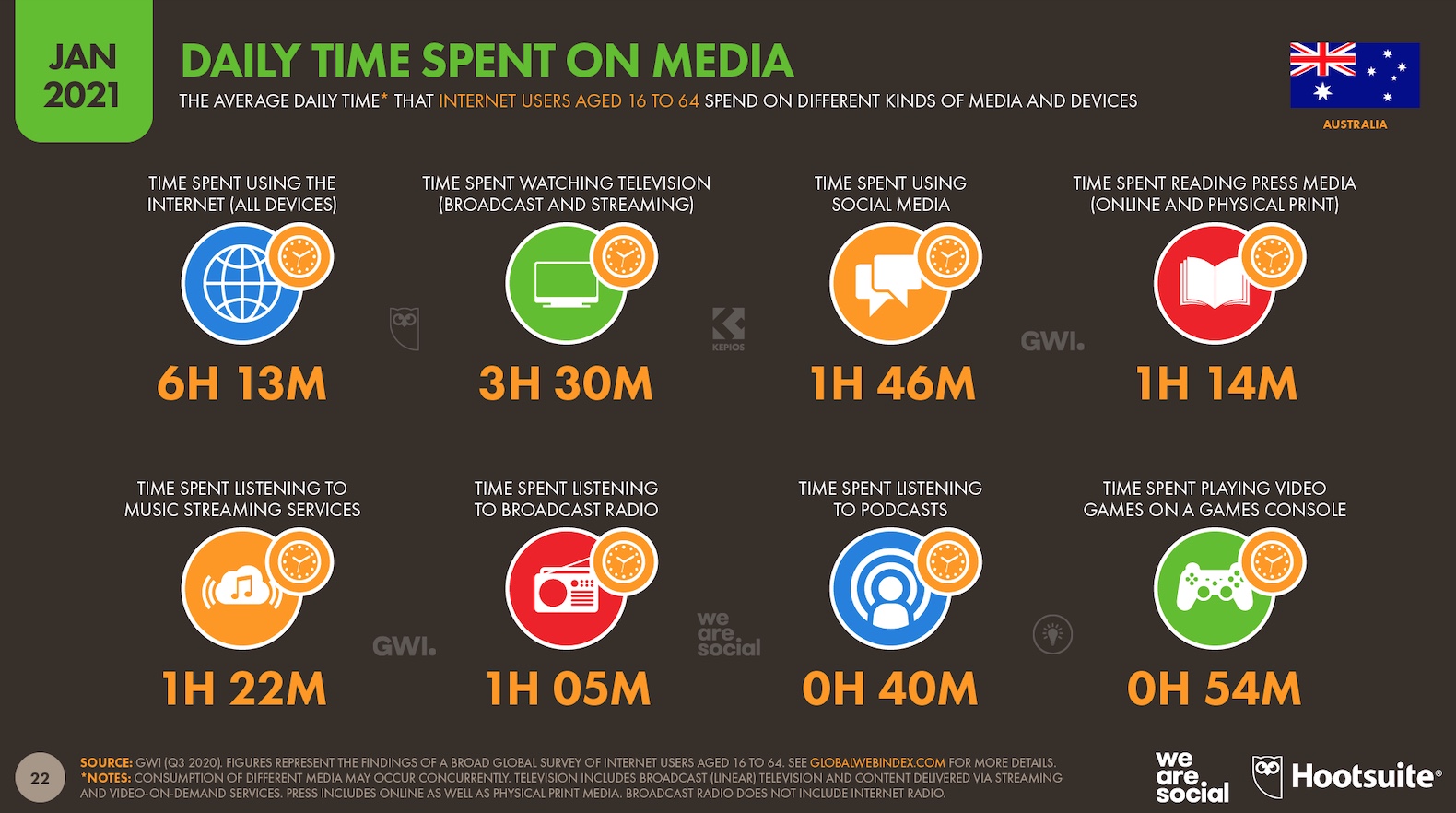 Australians spend an average of 32 minutes longer on the internet per day today compared to a year ago, according to Digital 2021: Australia – a report released today by socially-led creative agency We Are Social and Hootsuite, a global leader in social media management, covering digital, social and mobile use in our country. The report shows that daily time spent on the internet has increased from 5 hours 41 minutes to 6 hours 13 minutes in the past year, or close to 40% of their waking hours using the internet.

Social media, now at 1 hour 46 minutes per day, accounts for roughly one-third of the time spent online, making it the second most popular media activity for Australians after watching television. The report shows that YouTube, Facebook, Facebook Messenger and Instagram are still Australia’s most popular social platforms for internet users aged 16-64, but newer platforms are climbing the rankings.

Over the past year, TikTok has seen its usage almost triple amongst internet users aged 16-64, jumping from 8% to 23.6%. It has also become one of Australia’s top mobile activities, with Android users spending an average of almost 17 hours per month using the app. TikTok was the second most downloaded mobile app in Australia last year, after Zoom. 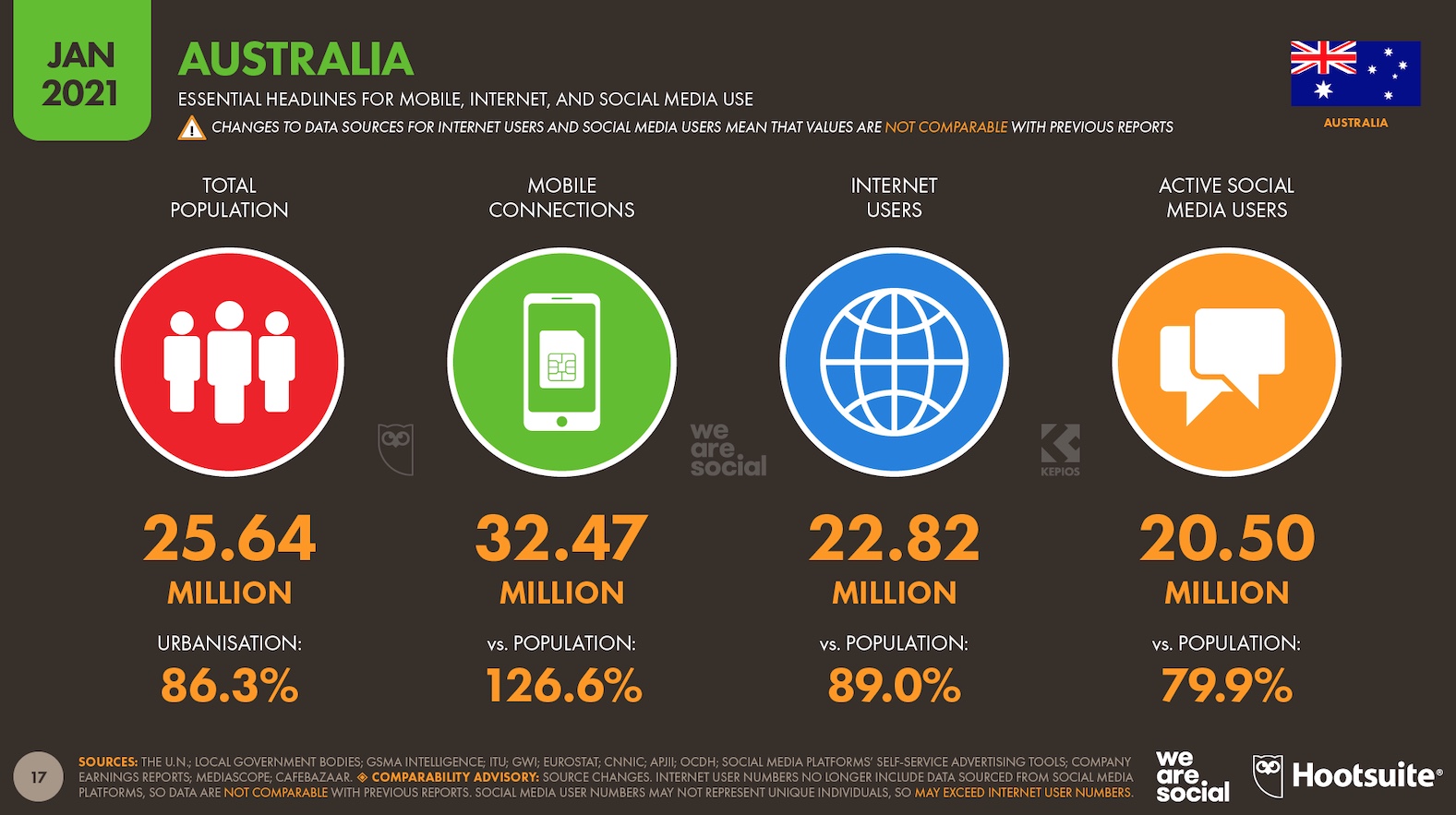 While overall digital ad spend only grew by 1% across the board, there was a 2% increase in social ad spend during 2020, with total investment in Australia reaching almost USD 2 billion (which equates to AUD 2.51 billion at today’s exchange rate).

The report also shows that Australians are prolific gamers, with 3 in 4 internet users aged 16-64 playing video games for an average of nearly one hour per day. Mobile takes the crown as the preferred gaming device, with more than half of Australian internet users aged 16-64 playing games on smartphones (51%), compared with 23% on tablets, 32% on games consoles and 35% on laptops or desktops.

The three most downloaded mobile games in Australia in 2020 were Among Us!, Roblox, and Fishdom: Deep Dive. When ranked by active users, Among Us! comes first again, followed by Pokémon Go and Roblox, with the latter also taking the second spot in the ranking of mobile gaming apps by consumer spend. 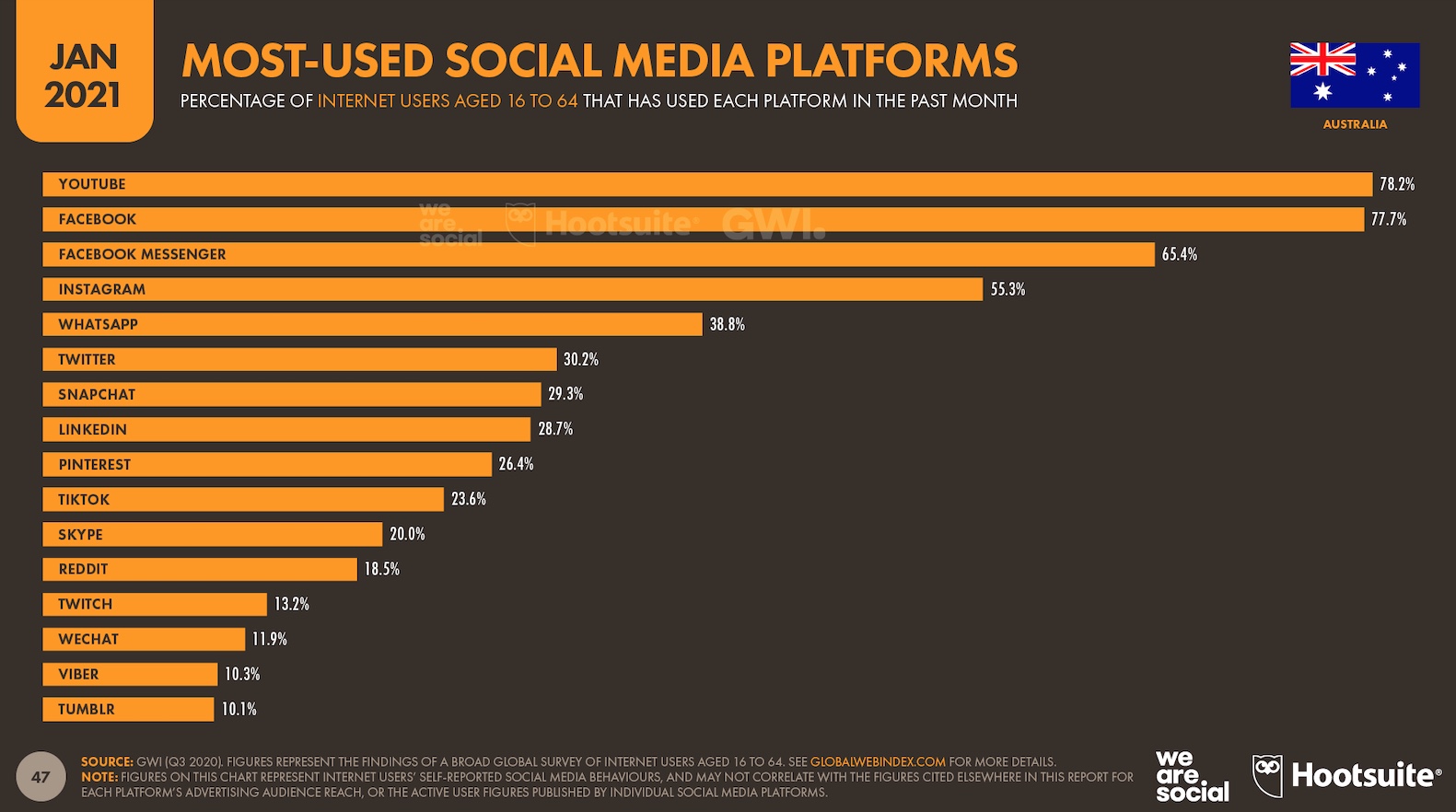 Says Suzie Shaw, managing director at We Are Social Sydney: “Even though the lockdown period in Australia was shorter than in most other countries, this report shows how much of an impact COVID-19 had on our digital life and the way we socialise, get our entertainment fix, and shop, among many other things. New social platforms, like TikTok, are growing exponentially, and social gaming is proving to be a prominent presence in the digital diet of most Australians, representing a unique and broadly untapped opportunity for many brands. It’s never been more important for marketers to understand online and social media cultures in order to reach and engage people in a meaningful way.”

Says Henk Campher, VP of corporate marketing at Hootsuite: The Digital 2021: Australia report demonstrates the incredible digital and social media shifts that have typified nations throughout the world over the past twelve months. Australians’ embrace of online shopping and retail spending is a trend that continues to emerge, with more than 3 in 4 Aussie internet users aged 16 to 64 revealing they bought something online in the past month and 28% sharing they discover brands through ads on social media. On the social side, 4 in 5 Australians are now active on social, spending an average of 1 hour and 46 minutes on social per day, with YouTube (78.2%) leading Australians’ use of social media platforms on a monthly basis, ahead of Facebook (77.7%), Facebook Messenger (65.4%), Instagram (55.3%) and WhatsApp (38.8%). Interestingly, while almost all Australians (98%) use a conventional search engine and close to 35% use social media to search for brand information, only 63.9% of Aussie internet users are concerned about how companies are using their data, with 36% using ad-blocking tools in the past month. So what can brands make of all these trends and data? Australians are turning to social for brand information and brand discovery (particularly through ads on social) as part of their daily social habits, with this increased time and engagement on social leading to more open wallets and purchasing decisions.”

To view and download the free report go to: https://wearesocial.com/au/digital-2021-australia