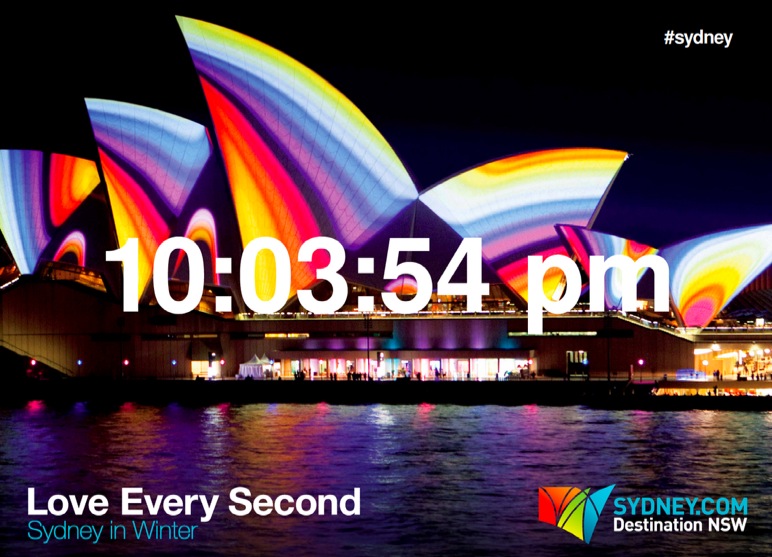 Tourism and Major Events Minister, George Souris, today unveiled the innovative campaign where Sydneysiders can share their best Sydney experiences in the “Love Every Second in Sydney” winter campaign.

“The new campaign has a major digital and social media component where people can share images of their favourite Sydney events, places or experiences in strategic advertising placements,” Minister Souris said.

This campaign will be the first time consumer generated content will be uploaded onto some of the key outdoor sites in Melbourne, Brisbane and Auckland.  “Media channels have been chosen to capitalise on high-impact, high-quality visual imagery and will include billboard advertising in prominent CBD locations – particularly in Melbourne, Brisbane and Auckland, as well as magazine advertising and a very strong digital and social media focus.

“The print advertising component of the campaign uses iconic images of Sydney in a scenario that follows a couple enjoying 48-hours at locations, attractions, events, restaurants and venues in Sydney.

“Elements of the campaign are sure to literally turn heads in the key markets of Melbourne, Brisbane and Auckland where prominent outdoor media will be used to display spectacular images of Sydney.”

Minister Souris said more than 10 high-profile bloggers will also contribute to the campaign by “seeding” content into various elements of the campaign.

“Sydney is a great place to visit all year, but the campaign encourages travel to Sydney over the cooler months, suggesting ways to explore and enjoy the city’s many world-class attractions, experiences and events.

“The campaign shows how every second in Sydney during our mild winter here is something exciting happening around the clock.”

“There is a particularly strong presence in Melbourne featuring inspiring Sydney images streaming onto the Young and Jackson billboard adjacent to Federation Square and Flinders Street Station, as well as highly-visible Sydney-branded tram wraps. In Brisbane, enticing images will be projected onto prominent buildings and Sydney advertising will saturate key CBD locations.

“Love Every Second in Sydney’ highlights our unique dining, nightclubs, bars, art exhibitions, fashion and shopping as well as the city’s signature events during the winter months.

“Sydney offers an exciting schedule of “only in Sydney” events during the campaign period including Vivid Sydney, the Sydney Film Festival, the world premiere of the musical “An Officer and Gentleman”, the 18th Biennale of Sydney and the Bledisloe Cup, to name just a few,” Ms Chipchase said.

More than 70 accommodation, attraction and tourism businesses will partner Destination NSW with special offers during the campaign.