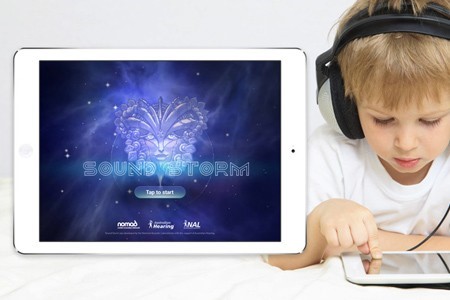 Nomad & Deepend has taken first place in Round 11.2 of IAB Australia’s Creative Showcase competition for its “Sound Storm” campaign for the National Acoustic Laboratory which uses an iPad auditory training game to treat children suffering from Spatial Processing Disorder. Second place went to M&C Saatchi for “The Teleporter Adventures” for Commonwealth Bank and third was awarded to AnalogFolk for its work for CrownBet on the “Fanterpreter” campaign.

Children suffering Spatial Processing Disorder struggle to use auditory cues to selectively focus on sounds coming from one location while suppressing noise distractions around them, such as focusing on a teacher in a noisy classroom. Nomad & Deepend’s campaign developed a solution in the form of a remediation process that used auditory algorithms for children aged 6-12 with SPD while engaging and supporting them through the iPad game. Studies have shown that 100% of SPD affected children completing the remediation program are cured of the disorder.

Says Lachlan Pottenger, Creative Showcase judge and creative director, FIRST DIGITAL: “One hundred percent rate of curing the condition is a pretty effective metric. The game is lovely and the design of the experience is a compelling and it’s an outstanding piece of work.”

“The Teleporter Adventures” is a storybook and companion VR experience developed by M&C Saatchi for Commonwealth Bank’s Start Smart – a free financial education program funded by CommBank and offered to more than 550,000 students in Australia. M&C Saatchi made classes more accessible in remote areas of Australia and created a new, more engaging way for kids to learn about finance. Aimed at 6-7 year olds, the first book is the story of Sammy the Space Koala who travels through the galaxy in search of a magical present for her Grandma’s birthday.

AnalogFolk created the “The Fanterpreter”, a data-driven microsite that uses sporting data to match Aussies with their perfect NBA team, for CrownBet in Australia. The campaign generated an ROI of $16 revenue for every $1 spent and contributed towards an overall 350% increase YOY in traffic to CrownBet NBA betting pages.

Now in its 11th year, the IAB Creative Showcase competition series accepts entries for digital work completed in the three months prior to close of judging for each round and only one campaign per agency is allowed. The winning entries are showcased here.