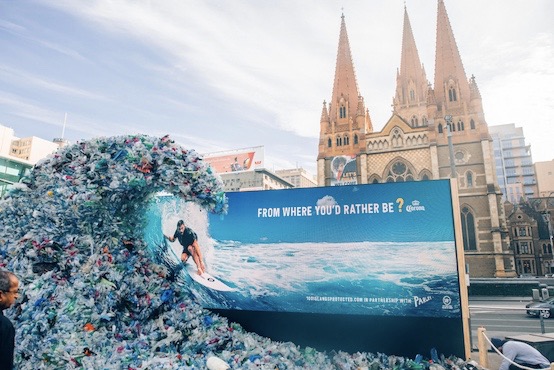 In the lead up to World Oceans Day on Friday 8th June, Corona will take to the world stage in a continued effort to raise awareness around the eight million metric tons of marine plastic pollution that’s dumped into our oceans each year. In partnership with 100 islands protected ambassador Chris Hemsworth, Corona is hijacking iconic symbols of paradise, including their OOH billboards in Melbourne, London, Santiago, Bogota, Santo Domingo and Lima. The activation led by PHD Media working with partner agencies Traffik, Monster Children and Fuel Communications.

At Federation Square, Melbourne, Corona’s ‘From Where You’d Rather Be’ OOH billboard featuring Chris Hemsworth surfing a beautiful ocean wave, will be juxtaposed by a 1,580kg ‘wave of waste’, to alert Aussies of the amount of plastic going into Australia’s ocean every hour. Over the course of Ocean’s Week, the brand will take plastic waste collected from in and around Melbourne and build them on top of the billboard, essentially polluting their own advertising with plastic.

The activation brings to life new research commissioned by Corona, which reveals that three quarters of Australians (74%) underestimate or have no idea about how much plastic is entering Australia’s ocean but when confronted with the amount of plastic entering our waterways, the majority of Australians (89%) said they will make an effort to reduce their consumption of plastics.

Says Andy Vance, marketing manager, Corona Australia: “Corona is on a mission to protect paradise and plastic pollution is the most visible issue affecting paradise today. Our ads usually showcase paradise the way we assume it to be, pristine and beautiful, but today it’s increasingly hard to find a beach without plastic. Through our work with Parley, we hope to reverse this trend. In the lead up to World Oceans Day, Corona wants to remind the world that we all need to protect our beaches to continue enjoying them by hijacking iconic symbols of paradise.”

Additionally, Corona and Parley are unveiling a limited-edition Hawaiian shirt design that incorporates plastic pollution imagery into the pattern. The Hawaiian shirts are available in three colours and can be purchased at wslstore.com/corona starting on World Oceans Day. Proceeds from each Corona Hawaiian shirt will go to Parley for the Oceans to help support its mission to protect our oceans.

Last month, the partnership also saw the brands change the name of the “Corona Bali Pro” World Surf League event to “Corona Bali Pro-tected” to make the point that even the most remote and aspirational paradises around the world are suffering.