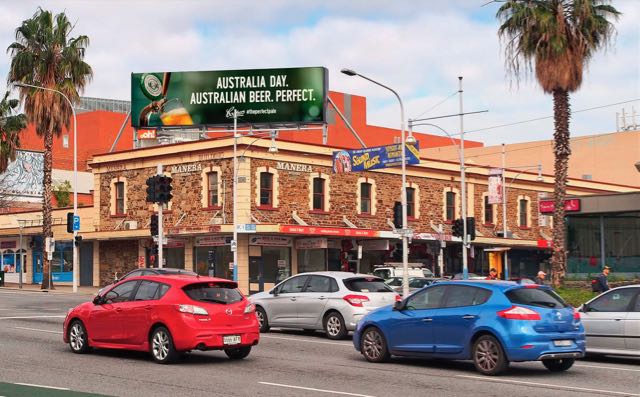 The campaign via KWP!, celebrated Coopers as a truly Australian brand with two different creative messages centering on the famous Coopers Pale Ale and on Coopers’ Australian identity.

The campaign appeared simultaneously on 40 of oOh!’s large format digital roadside billboards nationally as well as a range of oOh!’s Fly assets throughout the day.

Noel Cook, group director for oOh! Road, said the campaign marks the first time a single advertiser has made use of oOh!’s national large format digital network on this scale.

Says Cook: “We’re proud to have been able to deliver the simultaneous use of nearly all of our large format digital screens in our Road division for Coopers.

“Coopers has been using Out of Home advertising extensively throughout the summer, but wanted to create additional impact specifically on Australia Day.

“The capabilities of our dynamic network mean that we could display relevant messages that were time and region specific; with scale, to deliver truly unmissable impact to a massive number of people all over the country for Coopers.”

Says Cam Pearce, marketing and sales director for Coopers: “We wanted to make a large national impact during one of the biggest days the Australian summer to highlight our iconic Australian beer.

“The assets were a great fit for Coopers because it allowed us to be dynamic with our messaging, displaying tailored creative to a number of different audiences all around Australia while building on the massive scale of our summer campaign.”